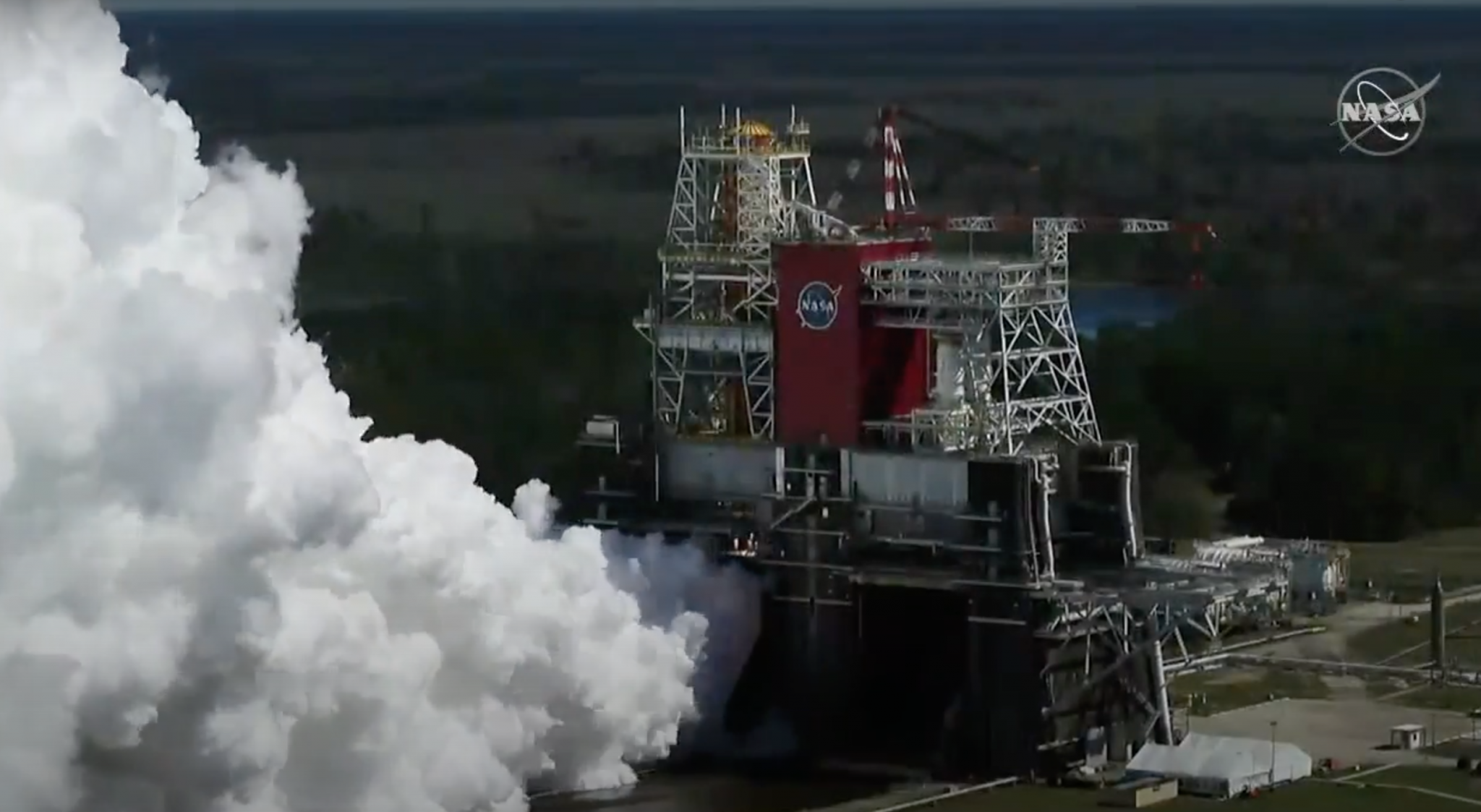 Good news from NASA. The Thursday, March 18, 2021, Green Run hot fire test of the Artemis Space Launch System (SLS) core rocket was everything they needed it to be, and more. And it needed to be everything they it needed to be. This was their second attempt at a full eight-minute SLS “launch duration” hot fire test. Their first attempt, last January, was a disappointment, shutting down after little more than one minute. Additional failures, delays, or cost overruns could give a potentially hostile Biden–Harris administration an excuse to “redirect” the Artemis budget.

The “green” in Green Run stands for new untested rocket hardware, and a successful hot fire was the final step before the core could be transported to Kennedy Space Center and mated to its boosters, Artemis 1 capsule, and nose cone for a potential October 2021 uncrewed lunar mission.

In the weeks preceding yesterday’s launch, the gargantuan 212-foot, 2.3-million-pound Boeing-built SLS core rocket stage was clamped down to the Stennis Space Center’s old Apollo-era B-2 test stand near Bay St. Louis in southern Mississippi. Billed as the world’s largest rocket stage, the core contains two huge propellant tanks, four Aerojet Rocketdyne RS-25 engines, miles and miles of cabling, and the computers, electronics, and avionics that serve as the “brains” of the rocket.

T + 08:05 and the ground control team erupts into applause and initiates shutdown procedures and secure operations. It was a spectacular success.

Thursday morning, over 114 tanker trucks began lugging liquid oxygen and liquid hydrogen from the propellant supply storage on the Stennis Space Center’s eastern perimeter. Six dedicated barges, each loaded with between 18 to 20 tanker loads of propellant, made the hour-long transit to the B-2 test-stand access canal. NASA engineers powered up core stage systems, began the four-hour fueling process, and started the countdown.

As the minutes ticked by, the flame deflector valves were opened, pumping 240,000 gallons of water to cascade around the exhaust channel.

In the terminal countdown, the final 10 minutes before the hot fire, the autonomous launch sequence initiates, simulating the countdown for an actual Artemis I launch.

The core stage RS-25 engine ignition begins at T – 00:06 seconds. Each engine is ignited in sequence, beginning with Engine 1, followed by Engines 3, 4, and 2 a few hundredths of a second apart. A vast jet of white smoke erupts horizontally and then blasts up vertically like an angry genie.

At T – 00:00 all four engines throttle up to 109 percent power, and the billowing clouds of white smoke dwarf the otherwise massive 350-foot-high B-2 test stand.

The RS-25 engines gimbal slightly as the thrusters simulate rocketing the vehicle skywards, then throttle down to 95 percent, simulating flight through Max-Q — the maximum dynamic pressure when aerodynamic pressures put the greatest stress on a rocket.

T + 02:00 preprogrammed commands gimbal the separate engines in a serious shuffle, and by T + 07:00 the onboard computer fully engages the four engines, pushing the rocket flight vector controls to their operational limits.

T + 08:05 and the ground control team erupts into applause and initiates shutdown procedures and secure operations.

It was a spectacular success. And again, NASA needed one after the disappointing first hot fire attempt.

The Artemis Moon to Mars program is all that is left of President George W. Bush’s Vision for Space, a vision that would replace the aging Space Shuttle, complete the International Space Station, return astronauts to the Moon by 2020, and launch for Mars soon after. When President Barack Obama gutted Project Constellation’s Space Launch System (SLS), he did so without consulting Congress. Congress responded by passing a four-year authorization bill to proceed with SLS. It was a rice-bowl move, designed to prop up the Shuttle Industrial Complex, a mutual admiration society consisting of Congress, NASA, and industry to keep taxpayer dollars in a circular flow.

NASA was directed to use existing contracts and workforce from the Space Shuttle, Orion, and Ares 1 projects; use Space Shuttle-derived components, including liquid fuel engines, external tanks, and solid rocket motor engines; and operate from associated testing facilities, either in being or under construction as of the date of the bill. Enough funds were doled out to keep lobbyists happy, but little actual progress was achieved on SLS, and NASA was forced to rely on Russian rockets to relay American astronauts back and forth to the ISS for the next nine years.

When President Trump set out to put NASA back on track, he found them saddled with an underfunded program based upon obsolete Shuttle technology. The basic plan was still to cobble together a mammoth Atlas-V style rocket, powered by four strapped-together shuttle-era RS-25 rockets, to launch a “super-sized” Apollo capsule dubbed “Orion.”

With a new mandate to return crewed missions to the Moon by 2024, NASA began pulling out the stops to make Artemis work. Old shuttle engines were located, cleaned up, and put through their paces. Work began on the core Artemis launch vehicle. But it was an uphill struggle — the bloated Shuttle Industrial Triangle remained in place. Progress remained frustratingly slow, and Vice President Mike Pence threatened to scrub the SLS in favor of commercial launch options.

NASA pulled out all the stops, organizing teams horizontally so they could work on parts of the rocket in parallel rather than in series. A prototype core launch vehicle was transported to Stennis, fitted with four refurbished shuttle rockets, and, after a year-long series of “green run tests,” fitted to the B-2 test stand, fueled up, and fired. Because it was their only prototype and any serious damage would be catastrophic to the program, on-board computers were programmed with “extremely conservative” shutdown parameters, which resulted in the hot fire failure.

And there was another problem. The Biden–Harris priorities are all about racial and gender equity, COVID-19 equity, climate equity, and economic equity — no mention of space exploration.

Faced with the existential threat of a radical liberal White House with no love for American exceptionalism, NASA hedged their bets with full-throated support of global warming and Earth science innovations, stressed their compliance with DNC-championed COVID measures, and emphasized the economic benefits of space commercialization.

The Biden–Harris priorities are all about racial and gender equity, COVID-19 equity, climate equity, and economic equity — no mention of space exploration.

To further protect the Artemis Moon to Mars mission, they “woked” the heck out of it. They announced their selection of the next batch of Artemis astronauts: nine men and nine women, of whom eight were “non-white.” They conducted a full court press outreach touting the first International Space Station “dual female astronaut spacewalk” (which had to be “walked back” because the station didn’t have enough spacesuits of the right size). They renamed NASA’s Washington, D.C., headquarters “in honor” of “Hidden Figures” scientist Mary Jackson, NASA’s “first Black female engineer.” They renamed the Perseverance Mars rover’s landing site “Octavia E. Butler landing” in honor of a “Black” science fiction writer who “emphasized diversity in tales of alternate realities and far-out futures,” all against the frenzied drumbeat of talking points emphasizing that Artemis was the twin sister of Apollo, and Artemis III is all about placing the first woman (and next man) on the lunar surface by 2024.

In a press conference two hours after the successful hot fire, Acting NASA Administrator Steve Jurczyk was pointedly asked to describe his interactions with the Biden administration, and how things might be different, particularly with the Artemis program.

“The administration communicated their support for the goals and objectives of the Artemis program and our overall Moon to Mars strategy,” said Jurczyk. He immediately highlighted other ways “we can contribute to important policy objectives of the new administration, including climate change … [and] reducing the environmental impact of aviation,” he said. “STEM engagement, that’s really important. One of the things we do is inspire the next generation and inspire our youth to go into Science, Technology, Engineering, and Math — and using the power of diversity and inclusion to advance our goals and solve the really tough problems that we have.”

Will it work? I hope so. I’m all for lunar bases and Mars colonies in my lifetime. On the other hand, though, identity politics and “Equity” promoters by definition advance division and exclusion in the name of inclusion and diversity. And once militant selection policies and critical race theory are imbedded in federal HR hiring and selection processes, they may be nigh impossible to remove. We should be launching into space not divided by gender and race, but united as Americans.