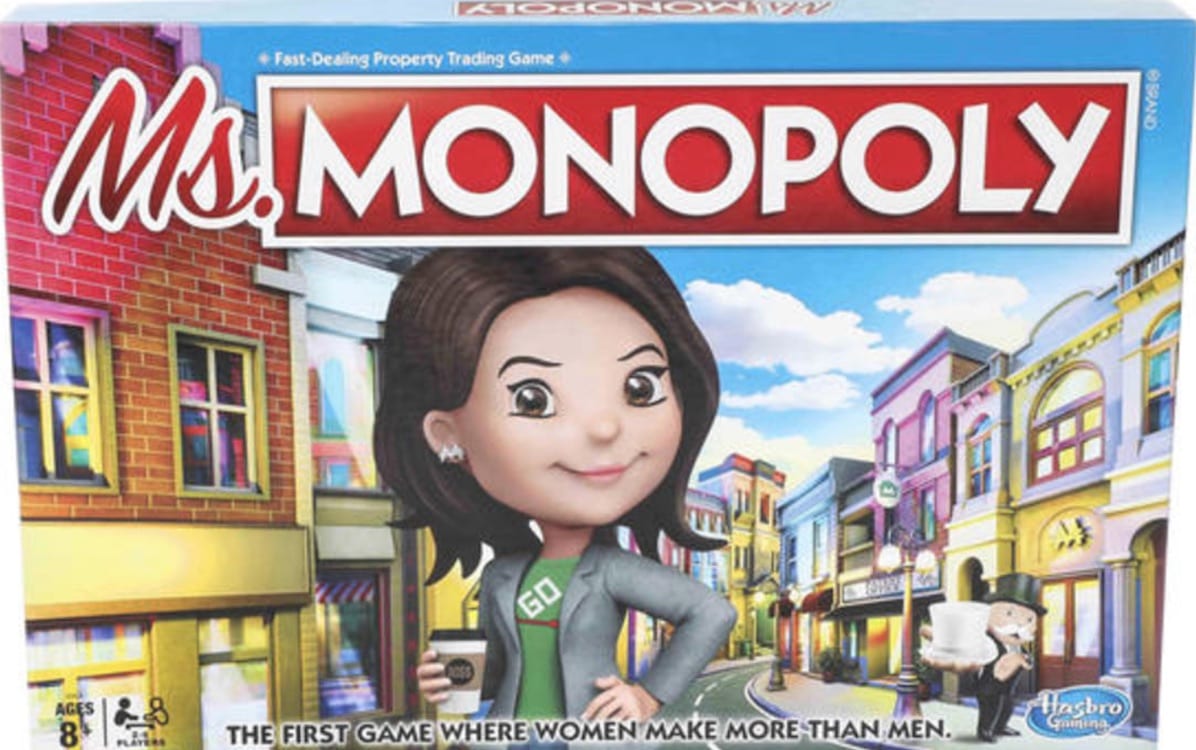 People take the game Monopoly™ seriously. How seriously? Back in 1991, in Pennsylvania, Michael J. Klucznik and Marc J. P. Cienkowski got together with some friends to drink a bit and play the game in Cienkowski’s basement rec room. The group, excepting Klucznik, decided “Marc’s house, Marc’s rules.” Klucznik objected, and a violent argument followed with the game thrown about and glasses smashed. Klucznik beat the smaller Cienkowski bloody before storming out. It didn’t end there. As Cienkowski wiped blood from his face, he angrily expressed his outrage at the injustice of being beaten up in his own home. He quickly fetched a compound bow, followed Klucznik outside, and fatally shot him in the chest with an arrow. He was sent to prison for nine to 20 years for third-degree murder (I know you’re thinking about going to Jail and not passing Go and not collecting $200, and you should be ashamed).

Most Monopoly arguments are far, far less contentious and don’t involve homicide, but disagreements are common even when the players are family members. Suppose the Waltons, the incredibly wholesome family from the 1970s TV show of the same name, had played the game. Even John Boy might have gotten snippy if Mary Ellen had insisted that she and the other girls should start with extra cash, then get more than the Walton boys every time they passed Go. “Good night” might not have been the last salutation passed around at bedtime. If you’d like the males in your household to have a similar gender non-neutral experience, Hasbro, the company that makes Monopoly, has a game for you. With the PC war cry of “It’s about time!” they have released “Ms. Monopoly.”

In Ms. Monopoly, female players start out with $1,900 while male players get $1,500. Females also receive $240 when passing Go while males receive the traditional $200. This special treatment for females is to address the disputed claim that women make less money than men for identical work. The game also changes the property-buying part of Monopoly into investing in innovations attributed to female inventors. In a lesser gesture, Hasbro has replaced the top-hat-wearing Rich Uncle Pennybags with a smartly turned-out female venture capitalist with one hand on her hip and another holding a coffee to go.

Are feminists pleased with Hasbro’s rebuke to the patriarchy? No. One negative response came from Rachel Charlene Lewis of bitchmedia.com in a column titled “What Ms. Monopoly Shows about Our Cultural Unwillingness to Understand the Pay Gap.” She insists the new version lacks “feminist credibility,” whatever that is and however it is measured. Would more patronizing advantages be necessary to please her? Perhaps males could apologize with each dice roll for existing. Perhaps pointy sticks could be issued to female players with which they can poke males when they land on a female-owned property.

Lewis doesn’t even like Ms. Monopoly’s appearance — “her blazer, light pink lipstick, and perfect winged eyeliner is something straight out of a ‘how to land your dream job’ guidebook.” She seems to be aware that the new version of the game patronizes women, but she doesn’t like classic Monopoly, either, because it “is gross capitalism made fun.” Perhaps she imagines alternative activities that would teach children that capitalism isn’t fun. Maybe she should look for a way to compel children, for their own good, into participating in these activities repetitively and uniformly with deviation punished. I’m sure there must be some old Stalinists left around in Russia who can suggest some ideas.

Lewis does like the “educational component” of the new version, which pounds players over the head with female contributions to progress with the goal of encouraging girls to emulate them. Girls, apparently, can’t be inspired by anyone not of the same sex. One innovator the game commends is movie star Hedy Lamarr, who is credited with inventing Wi-Fi. The beautiful and intelligent actress did devise a method of radio frequency hopping, but she did it with the assistance of a rather odd man, George Antheil.

Antheil was a pianist and modernist composer who created works that included such sounds as the roar of airplane engines. He was also a popular advice columnist who wrote about female endocrinology and its effects on romantic relationships. He didn’t have a medical degree, but his columns contained lots of scientific-sounding advice. Lamarr consulted him about improving her figure, and a friendship followed. Both were patriotic and eager to help America during World War II. Together they devised a way for radio-controlled torpedoes to thwart jamming. Antheil had used player pianos in one of his compositions, and the pair used two synchronized player piano mechanisms to alternate frequencies randomly so that a jammer couldn’t predict which frequency to jam. Their innovation didn’t see war service, but decades later the concept of frequency switching, done electronically and improved in other ways, was important in the creation of Wi-Fi.

Significantly, one female innovator associated with Monopoly went largely unrecognized for years. In 1904, Elizabeth J. Phillips (née Magie), a socialist writer, patented a game she named the “The Landlord’s Game.” It was played on a board with squares along its sides representing properties. It had corners labeled “Go to Jail” and “Public Park.” Players rolled dice to determine how to move a token around the squares with the goal of buying properties with play money to build monopolies with which to collect rent that would eventually bankrupt the other players. Phillips hoped the game would demonstrate the way monopolies drove the many into bankruptcy while enriching the few, then ultimately just one monopolist. Phillips got the game published, but it wasn’t a commercial success. It did have fans who circulated homemade versions with varied rules. In 1935, Charles Darrow chanced to play a version popular with Quakers who lived in Atlantic City. He copied it, added better illustrations, made some other small alterations, and eventually persuaded Parker Brothers (later part of Hasbro) to buy his version without informing them of Phillips’ patent. After learning of his actions, Parker Brothers paid her $500 (about $9,300 in today’s dollars) and published other games by her, but it was poor compensation considering Monopoly’s success. Parker Brothers chose to credit Darrow as the game’s creator in its advertising.

During the Great Depression, the public sought escapism from grim reality, enjoying fantasies of wealth. Movies of the era make this obvious, with stories of romance or mystery among the rich. In Monopoly, you could spend an inexpensive evening piling up play money in a fanciful, engaging competition that incorporated enough equalizing luck that a child might beat an adult. In its first two years on sale, over two million copies of Monopoly were sold. Monopoly has since sold over 275 million copies in 47 languages in 114 countries. Ironically, instead of serving as a socialist lesson in the evils of capitalism, as Phillips had hoped, Monopoly has encouraged playful greed and been a rudimentary introduction to wheeling and dealing for generations of children — see Lewis’ “gross capitalism made fun” remark above. How much fun remains in this new version of Monopoly is questionable.

Ms. Monopoly targets children, but children are acutely conscious of fairness. Their school life, home life, and play are all bound by rules. When rules are bent to let one child evade requirements others must meet, children notice. “That’s not fair!” is a comment with which parents are very familiar. Fairness is especially important to children in play, where kids generally enforce the rules. Giving female players an advantage will be seen as cheating by males, and it’s doubtful any boy will happily sit down for an evening of Ms. Monopoly. If a boy does and loses, it’s unlikely to make him more sympathetic to women facing discrimination. He would have just experienced females being given unfair advantage, and he may start suspecting it elsewhere. If a boy wins, he could conclude that females couldn’t beat a male even with an advantage, while his female opponents would have to face the humiliation of losing after being given that advantage. A girl who beats a boy at Ms. Monopoly couldn’t feel truly victorious. She wouldn’t have played a fair game. She might even conclude that to win in other parts of life, it’s okay to bend the rules. Girls playing against girls or boys playing against boys would be pointless politically as without girl players being favored over boy players there is no ideological ritual to perform.

Adults playing Ms. Monopoly would face similar problems. Socializing is usually the purpose of an adult board game. It is a competition, however, and we invest a little ego with our play money in those plastic houses and hotels. We want to win, especially as the game grows long and we build up our monopolies or see them diminish, but there’s only one winner. The rest of us nearly always shrug off losing with lots of good humor, but an evening of Ms. Monopoly’s political correct fun sounds like an invitation to grumble to ourselves afterwards, “Next time, Charades.”