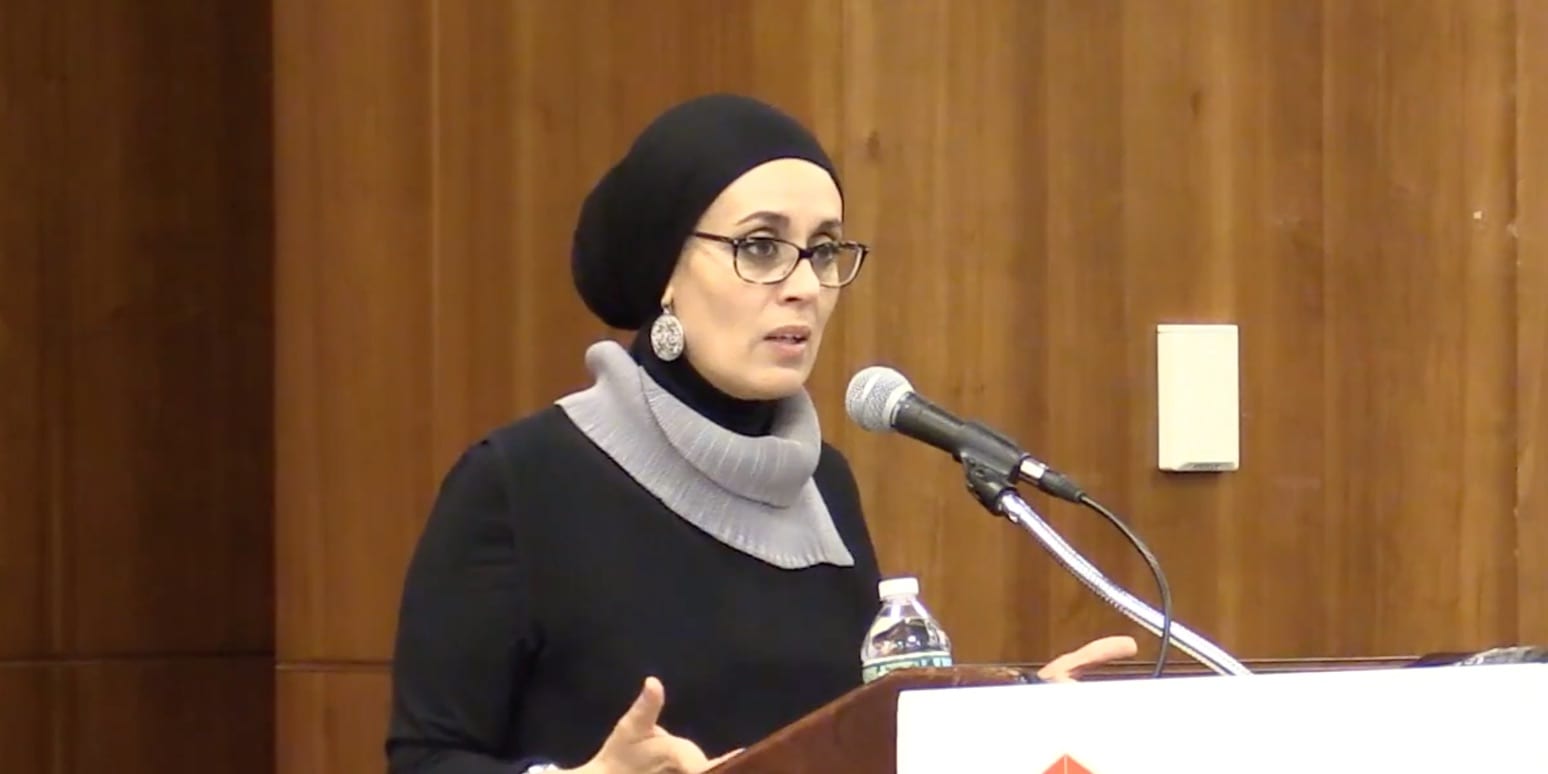 At a recent appearance in Washington, D.C., leading Muslim-American educator Debbie Almontaser hawked her new book, Leading While Muslim: The Experiences of American Muslim Principals After 9/11. The book grew out of her own personal experiences as the founding principal of the long-troubled Khalil Gibran International Academy (KGIA), a New York City public high school with a focus on Arabic instruction.

In 2007, Almontaser resigned from KGIA after praising a t-shirt bearing the phrase “Intifada NYC” — an apparent reference to violence against Jews in Israel and the Palestinian territories. “Intifada,” Almontaser insisted, “basically means ‘shaking off. ’” Almontaser argued that although the word was “developing a negative connotation due to the uprising in the Palestinian-Israeli areas,” it was nonetheless “an opportunity for girls to express that they are part of New York City society” and are “shaking off oppression.” Her comments sparked storms of protest from the New York Post, the Anti-Defamation League (ADL), and local parents.

The group that produced the t-shirt, Arab Women Active in the Arts and Media (AWAAM), shared office space with the Saba Organization of American Yemenis, of which Almontaser was a board member and spokesperson. AWAAM also shared officials with Al-Awda, an anti-Israel organization that the ADL has accused of openly supporting terrorism and violent anti-Semitism.

Following her resignation from KGIA in 2007, in the wake of immense public pressure, Almontaser only developed her reputation for radicalism further. In 2008, she worked with the Council on American-Islamic Relations (CAIR) to oppose the NYPD’s counter-terrorism efforts. At the time, CAIR had just been named by federal prosecutors as an unindicted coconspirator in a prominent terror financing case, leading the FBI to cut off all contact with the organization.

Since then, Almontaser has become a prominent activist in New York City, where she helped organize a 2017 protest against President Donald Trump’s temporary travel restrictions. That protest, during which Yemeni-Americans closed their bodegas, gave rise to the Yemeni American Merchants Association (YAMA), where she now serves as board secretary. Most recently, YAMA launched a bodega boycott of the Post after it published a sensational cover denouncing Representative Ilhan Omar for remarks trivializing the 9/11 attacks.

Despite her scandalous behavior while at KGIA, Almontaser is still mixing Islamist activism and educational issues. She appeared on April 16 at the American Federation of Teachers’ (AFT) Albert Shanker Institute, where AFT President Randi Weingarten moderated a discussion before an audience of about 35. The next day Almontaser addressed about 25 listeners at Georgetown University’s Saudi-established Prince Alwaleed bin Talal Center for Muslim-Christian Understanding (ACMCU). ACMCU director Jonathan Brown moderated. (In February 2017, Brown came under fire for a speech defending sex slavery, in which he claimed that “the Sharia understanding of slavery” is “not comparable at all” to America’s past slavery.)

Almontaser’s message is one of victimhood. At the Albert Shanker Institute, she reiterated the falsehood that an “Islamophobia industry” has “so much funding” to attack people like her. She passed off KGIA as a high school “to develop global citizens to compete for international careers,” that struggled against an “astonishing” onslaught of demands about the teaching of issues such as Israel.

Almontaser further condemned post-9/11 America as a “police state,” which enacts tyranny through law enforcement issues, such as stricter immigration enforcement. Her moderator, Randi Weingarten, hyperbolically responded that current “dehumanizing” of Muslims is “not terribly dissimilar to the way in which Jews were treated by Hitler.”

Almontaser compared her “Intifada NYC” t-shirt imbroglio with Representative Ilhan Omar’s ongoing controversies. Almontaser described Omar’s critics “taking words out of context and portraying them in a way to make her anti-American.”

In 2007, Almontaser’s host, the very same Weingarten, had publicly reproached Almontaser for her praise of the intifada t-shirt. However, at AFT, Weingarten appeared to regret her stand against Almontaser’s extremism, now lamenting that people had “used my words against Debbie.” She now accepted without demurral Almontaser’s condemnation of the Post, which she stated was “making money from racism and bigotry” through criticism of her and the scandal-ridden Omar. The audience applauded Almontaser’s role in the bodega boycott.

The following day at ACMCU, Almontaser stated that the Islamic “way of life” cannot include any violent understandings such as those of Al Qaeda, an assertion she has often made in the past. “The so-called radicals,” she said, “I personally don’t see them as Muslims,” but rather as a “fringe minority within the 1.7 billion Muslims” that “has a political agenda that has nothing to do with Islam.” She added: “Anyone who takes the life of one person is like taking the life of humanity.”

Yet, in sharp contrast to her statements at ACMCU, she readily imposes her own political agendas on American Islam. One subject in her writing, a Harvard-educated Pakistani-American named Aiman, “didn’t want to have anything to do with Islam anymore” because he thought American Muslim leaders have offered too lenient a response to jihadism. “He believed that Muslim clerics and leaders in the United States and elsewhere are complacent, that they are not condemning what’s happening, that they are not educating the public,” she explained. Yet Almontaser concluded that Aiman’s observations were nothing but internalized “Islamophobia,” a “self-fulfilling prophecy when you hear it over and over and over again that you start to believe these things.”

Almontaser’s Pakistani-American skeptic found ironic confirmation in an audience questioner who described his own experiences with four “Muslim” college professors. “Three of them,” he claimed, “have made anti-Islam, anti-Muslim statements in class.” The only professor whom the audience member deemed supportive enough of Islam has purportedly been “viciously attacked, his statements taken out of context, himself and his family attacked.” During these discussions, none among Almontaser’s audiences recognized the dangers of non-Muslims denouncing Muslims who struggle against Islamism as “anti-Muslim.”

Almontaser’s miseducation efforts would have everyone believe that all Muslims think like her and her radical allies. In contrast, her studies and the audience’s comments at ACMCU indicated the diversity of thought among individuals with Muslim backgrounds who confront issues such as Islamism, extremism and violence. And yet, teachers’ unions and academia are promoting Almontaser’s monotone tales of victimhood while ignoring or even suppressing more critical voices among America’s Muslims, who struggle against Islamist attempts to dominate their faith.