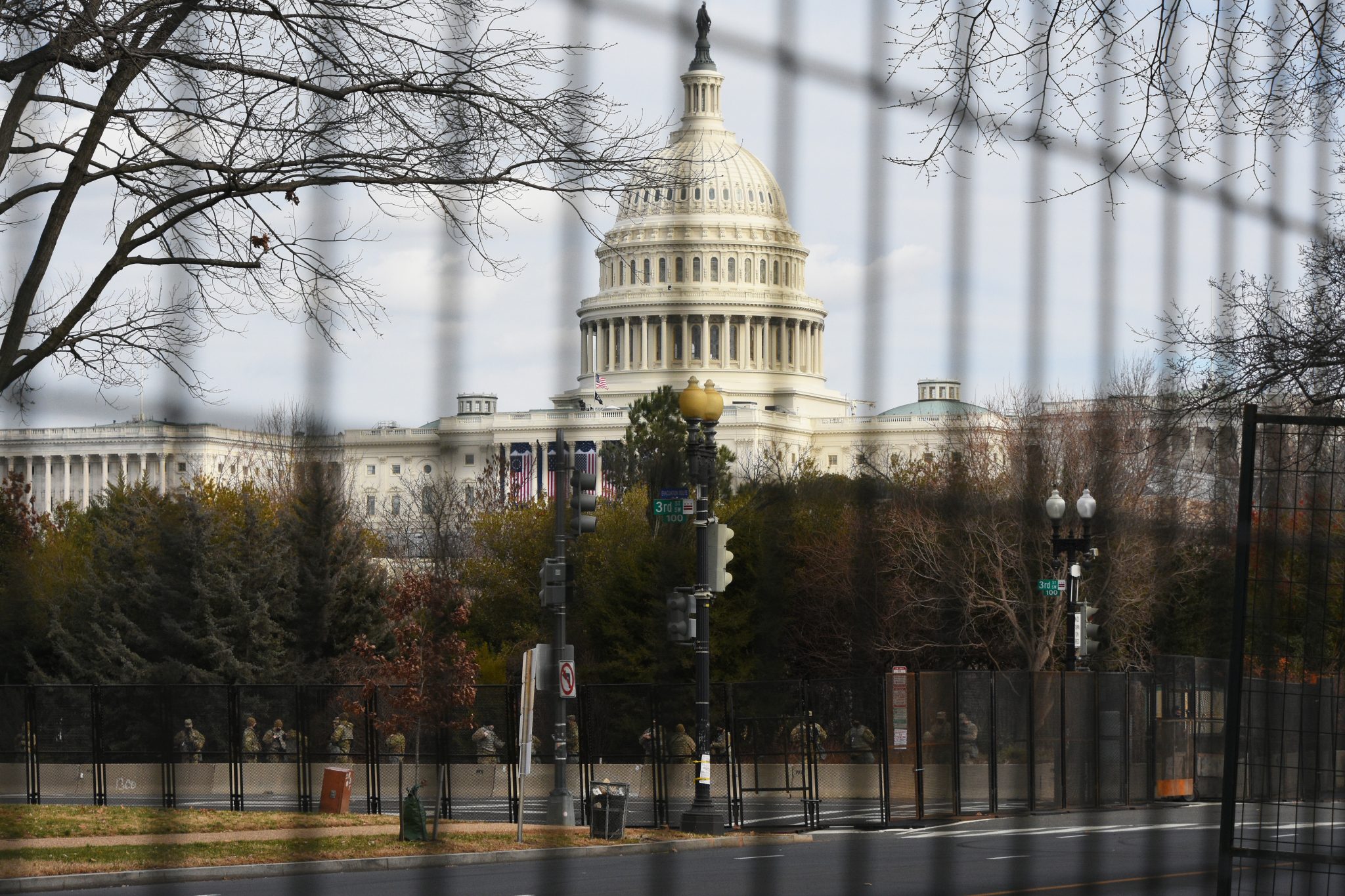 Washington — “Mommy, they’re taking it down,” a toddler excitedly calls to his parents on Saturday as they walk around the fenced-off perimeter of the Capitol Hill complex. Three workmen in front of him are disassembling the rolls of razor wire that have crowned the fence since it was erected in January. On Sunday, they will open up the closed streets and sidewalks.

It’s quite a spectacle. All along the perimeter pedestrians stop to take pictures and chat with the workmen as they throw the coils of wire into a pickup truck bed. When the fences themselves come down, awed onlookers reach out and touch the fallen chain-link panels as if they are sections of the Berlin Wall.

Once the federal government increases a place’s security, an “abundance of caution” is enough to keep militarization in place temporarily. Inertia usually makes the deal permanent.

A man with a ponytail dares me to touch the razor wire. I press my index finger into one of the bladed edges. It’s sharp — it certainly was not there for show — and would have sliced me up had I ever attempted to climb over into the forbidden zone. He chuckles, “Killer fence, right?”

At the base of Capitol Hill, I run into Katherine Ludwig, a woman who has been painting watercolors of the fence ever since it was put up. She comments on how quickly the workmen are moving, and jokes that she can hardly keep up.

“Everyone is so happy now,” she says, pointing to the people milling about. “This fence has engendered so much sadness in the city.”

That’s an understatement. Washingtonians received the fence, which shut down several city blocks, with universal loathing. City natives have pushed for it to be removed since Democrats in Congress cited the January 6 Capitol Hill riot as an excuse to build a fortress around Congress and the Supreme Court.

When Capitol Police refused to give a timeline for when the protective perimeter would be removed, D.C. residents staged protests. City leaders joined the fight, too. On Friday, a group of protesters attached signs to the fence with sarcastic messages such as “Welcome to Fort Pelosi,” “Razor Wire Heals Divides,” and “The Face of Unity.” Capitol Police removed the signs almost immediately and without explanation.

But that’s just the way things work on the Hill now. There’s no transparency. The Capitol Police still stonewall anyone who asks about how long the inner fence — the one protecting the Capitol building itself — will remain standing. And good luck getting answers on how long the National Guard will be lounging around the city. For all we know, they’ll become a permanent fixture.

Something similar happened last spring when protesters set fire to St. John’s Episcopal Church behind the White House. A seven-foot, non-scalable fence went up around the entire executive complex. It was briefly removed once during the summer. But when the protests did not subside, the fence went right back up, and it has remained up since. No one expects it to come down — not during the Biden administration, at least.

Of course, the White House wasn’t all that accessible before last summer, either. The 9/11 terror attacks saw to that. The same goes for the monuments on the National Mall, Reagan National Airport, or, well, almost any airport in the country, thanks to the TSA. Once the federal government increases a place’s security, an “abundance of caution” is enough to keep militarization in place temporarily. Inertia usually makes the deal permanent.

In the case of the Capitol Hill fence, that caution and inertia was compounded by sustained, manufactured hysteria. There was no reason for Democrats to stop using the pretense of a crisis to keep Congress as buffered from the public as Joe Biden’s presidency — except that it was politically beneficial during impeachment and in the debates over the second coronavirus relief package.

Although the outer fence is coming down, it will remain advantageous for Democrats to keep the inner fence up and to keep the National Guard on the prowl. Fear, after all, is the easiest way to maintain a tight grip on power. That’s what Democrats accused former President George W. Bush of doing in the wake of the 9/11 attacks. It’s completely unsurprising that party leaders used Bush’s playbook following January 6.

It is all too likely that the inner fence will become permanent. And the toddler celebrating the outer fence’s downfall may well be a grown man by the time the last National Guardsman goes home.