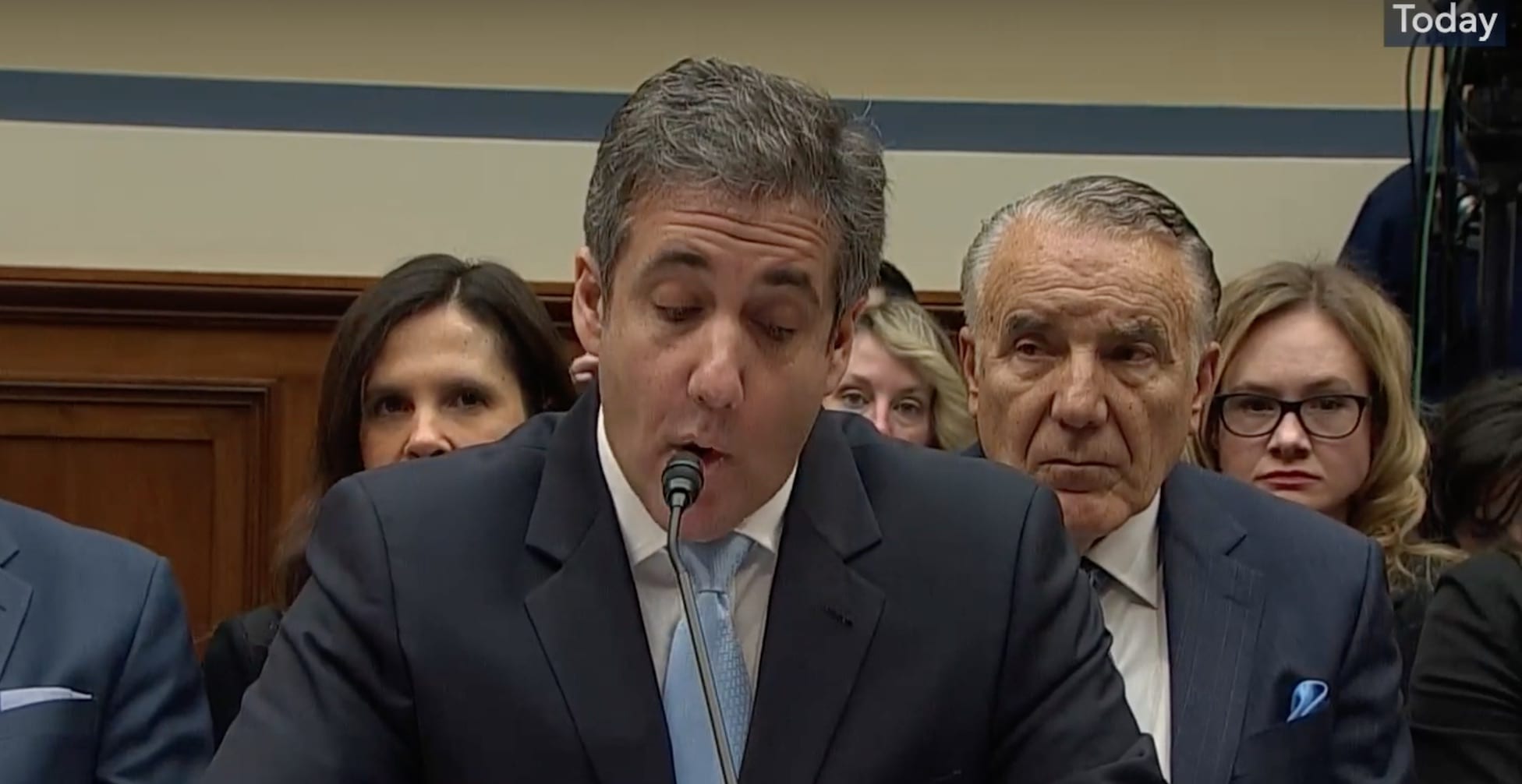 Michael Cohen is back in town and, as expected, put on a Pecksniffian public performance Wednesday for an appreciative audience consisting of Democrats, the media, and miscellaneous TDS sufferers. Assisted by that preeminent paragon of veracity, Lanny Davis, he pitched several patent specifics of his own invention that he offered as a remedy for the dread disease that has ravaged the Beltway for two years — the Trump Presidency. Cohen peddled his special swamp juice with the same pious solemnity with which he perjured himself before Congress about an aborted Moscow real estate deal involving Trump and his construction company.

Cohen, who has just been disbarred for lying under oath, testified before theHouse Committee on Oversight and Reform. The Chairman of this committee is Elijah Cummings (D-MD) and boasts such virtuosos of forensic analysis as Alexandria “the boss” Osasio-Cortez and Rashida “impeach the motherf**ker” Tlaib (D-MI). But the Republicans on the committee were not supine onlookers. Tuesday, Reps. Jim Jordan (R-OH) and Mark Meadows (R-NC) wrote an op-ed for USA Today, warning that Cohen’s record of casual perjury renders him untrustworthy: “When Cohen testifies, he will surely lie. He has done it before. He will do it again.”

The hearing opened with the inevitable effusions of partisan gas from Chairman Cummings who pompously insisted that he and his committee were only interested in the truth and that he was “deeply disturbed” about Cohen’s revelations. This was followed by a statement from Ranking Member Jordan: “This may be the first time someone convicted of lying to Congress has appeared again so quickly in front of Congress. Certainly it’s the first time a convicted perjurer has been brought back to be a star witness in a hearing.” In other words, Cohen was soon to be jailed for lying to Congress which destroyed his credibility and undermined that of the committee.

Then Cohen read his self-serving statement, in which he confessed that he did lie to Congress about the above-referenced real estate deal, one of the crimes for which he‘ll be jailed, yet admits that Trump “did not directly tell me to lie.” He also acknowledged that he has no “direct evidence that Trump or his campaign colluded with Russia.” Cohen admitted he paid $130,000 of his own money to Stormy Daniels, claiming Trump told him to do so. He provided no proof of that request, however. The theme of his statement is that he committed all the crimes for which he has been convicted out of “misplaced loyalty” to Trump and “to protect” him.

Cohen had no plausible answer for that question, of course. Next, Democrat Rep. Debbie Wasserman Schultz (D-FL) asked him a question about his claim that President Trump knew in advance about a 2016 WikiLeaks dump involving Hillary Clinton’s missing emails. Cohen claims he heard this in July of that year during a speakerphone conversation involving Roger Stone and Trump. But as the hearing progressed the credibility of Cohen’s claim was wrecked when GOP Rep. Thomas Massie (R-KY) pointed out that Julian Assange’s impending release of Clinton’s emails had already been made public as early as June 2016 when WikiLeaks teased it.

Rep. James Comer (R-KY) then asked the question that was no doubt on the minds of many people who watched the hearings: Where does a man charged and convicted on multiple fraudulent bank transactions, in addition to tax fraud and perjury, get the audacity to call anyone a “cheat”? The answer is obvious. This was clearly what the Democrats wanted America to hear. Rep. William Clay (D-MO) quite literally called the President a liar and called the Republican committee members “enablers.” Rashida “impeach the motherf**ker” Tlaib (D-MI) called President Trump a criminal and insinuated that North Carolina GOP Representative Mark Meadows is a racist.

And so the long day wore on — the Democrats gratuitously trashed the President and their GOP colleagues on the committee, while the Republicans questioned Cohen’s veracity and the gaping inconsistencies in his various statements under oath — including several obviously dishonest assertions that he made during his testimony before the committee on Wednesday. And there were a significant number of such questionable statements. Ironically, the most dangerous for Cohen was a transparent lie his lawyers let him put in writing in preparation for Wednesday’s hearing. As Jordan put it while waving the “Truth and Testimony” form in the air:

There are things he said today during several hours of questioning that just don’t add up.… He attested in his signed Truth and Testimony form that he did not have contracts with foreign government entities. Earlier he admitted to having consulting contracts with two foreign entities owned in part by foreign governments: BTA Bank of Kazakhstan and Korea Airspace Industries.

This obvious omission led Rep. Meadows to call for criminal charges. He tweeted:

I just entered a referral for criminal investigation of Michael Cohen, who violated the Foreign Agents Registration Act by illegally lobbying on behalf of foreign entities without registering.… Cohen talks about “blind loyalty.” His real blind loyalty? It’s to the almighty dollar.

And, while he can’t provide any convincing evidence that Trump colluded with Russia, or even provided the money to pay off Stormy Daniels, he seems to be willing to collude with the Democrats in the House. One could actually see Lanny Davis cringe when Cohen admitted that he had been working with the Democrat Chairman of the House Intelligence Committee, Adam Schiff (D-CA), to get his testimony in tune with the party line for his Thursday hearing with that body. Cohen said, “I spoke to Mr. Schiff about topics that were going to be raised at the upcoming hearing.” To this damning revelation Jim Jordan exclaimed, “Whoa!”

At long last we came to Cohen’s closing statement, which was little more than a litany of tired Democrat talking points, to which he added the claim that if Trump lost the 2020 presidential election there would not be a “peaceful transfer of power.” In other words, the President is a dangerous autocrat who would destroy the country to remain in power. This is of a piece with his earlier comments insinuating that the President was a violent thug. When pressed on this by Rep. Jim Cooper (D-TN), Cohen admitted that he had never seen President Trump physically threaten anyone, suggesting that Trump would rely on others to handle such work.

To get the full impact of Cohen’s performance, it’s necessary to watch the entire hearing. If you’re a Democrat, a member of the “news” media, or just a random TDS victim, you’ll like it. If you have fears for the fate of the nation, it will not give you peace of mind. If you believe the Democrats have any agenda other than bringing down the President, it will cure you of your delusions. Cohen was Trump’s willing partner in everything he did for a decade. Wednesday, he cut the man’s throat and blithely discussed the book offers his perfidy has already produced. I’m not kidding. Michael Cohen was a craven little errand boy. Now he’s peddling poison to the public.