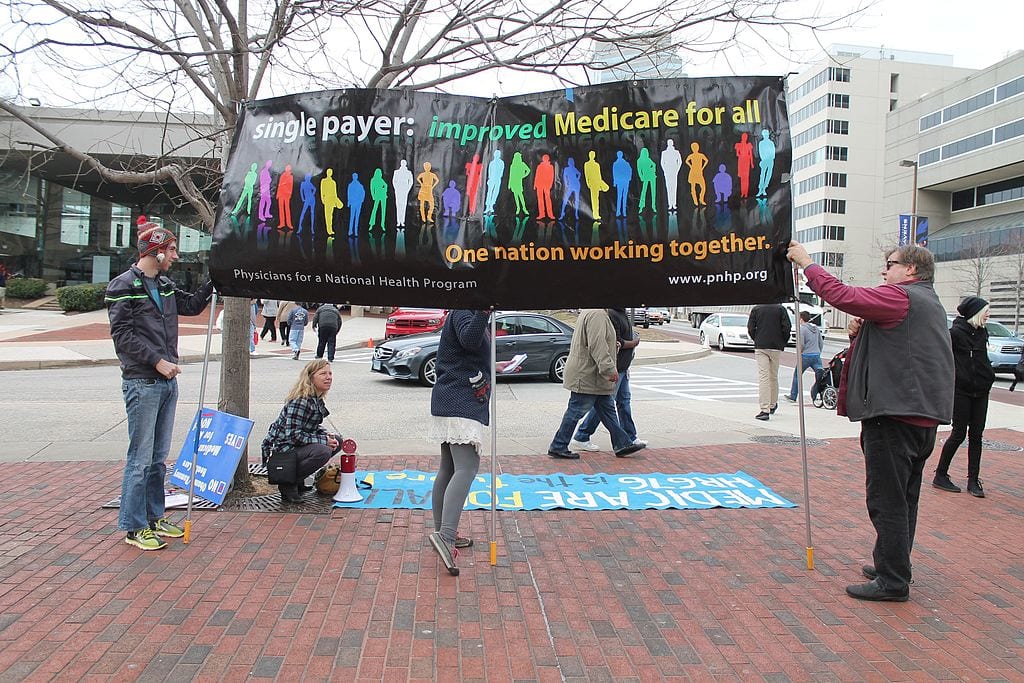 On Tuesday the Democrats received an unpleasant reality check. The California primaries, which they believed would provide the impetus for a nationwide “blue wave” destined to drown the GOP’s congressional majorities, left them pathetically grateful not to be locked out of key races in November. One of the rocks upon which their electoral fantasies foundered was their irresponsible support of Medicare-for-All, a single-payer health care plan that would dramatically expand a government program that is already on the verge of bankruptcy. The just-released Medicare Trustees report indicates that the traditional program for the elderly will go broke in less than ten years:

The estimated depletion date for the HI [Hospital Insurance] trust fund is 2026, 3 years earlier than in last year’s report. As in past years, the Trustees have determined that the fund is not adequately financed over the next 10 years … The Trustees recommend that Congress and the executive branch work closely together with a sense of urgency to address the depletion of the HI trust fund.

This is not a complicated message. It obviously means that, if Congress doesn’t address this issue adequately and quickly, there will be fiscal hell to pay. Yet the Democrats not only refuse to consider any sort of sensible Medicare reform program, they compound this negligence by vilifying anyone who comes up with such a plan. They render this outrageous behavior even worse by peddling the implausible lie that the soon-to-be insolvent Medicare can somehow be converted from a program that covers about 50 million people into a single payer system that provides all Americans with health care. And it’s not just a few barmy backbenchers that peddle this BS. It’s the party’s “leaders.”

Before he was finally run out of town, disgraced Rep. John Conyers’ perennial Medicare-for-All plan had accumulated no fewer than 80 co-sponsors. And, in the Senate, such luminaries as Cory Booker, Elizabeth Warren, Kamala Harris, Sheldon Whitehouse, Jeff Merkley, and Kirsten Gillibrand all have come out publicly in favor of Senator Bernie Sanders’ Medicare-for-All bill. These people are predictably vague concerning how such a program will work when traditional Medicare is, as Margaret Thatcher famously put it, already running out of other people’s money. They mouth platitudes about raising taxes on “the rich” and repealing the Trump tax cuts, but even the New York Times admits:

Attempts to set up single-payer systems at the state level have run into precisely this problem. Even in blue states like California, Colorado and Vermont, voters and lawmakers have consistently rejected or abandoned single payer on the grounds that it would cost too much or be too disruptive.

And the cost problem doesn’t go away at the federal level. Single payer apologists claim that the fabled reduction in administrative costs would save huge amounts of money. In reality, the administrative costs for Medicare are far higher than the 3 percent usually claimed because its overhead costs are hidden in the budgets of other agencies. The IRS collects taxes to fund it, the Social Security Administration collects premiums, and HHS manages the accounting and auditing for the program. If these costs were properly reported, they would easily exceed those of the insurance industry. And, even with hidden overhead, government coverage is still pricey. As the Washington Post confesses:

And those inconvenient facts come with another reality. A Medicare-for-All system may provide “universal coverage,” but it will also impose universal rationing. In fact, rationing has always been an integral component of the program. I have, on many occasions, witnessed physicians arguing with Medicare concerning whether a patient’s condition “met criteria” for admission. The episode always ends thus: the doctor slams the phone down and tells the Utilization Review nurse, “I don’t give a damn about Medicare criteria. Admit this patient now.” The UR nurse complies with her orders, and Medicare refuses to pay based on its determination that the admission wasn’t “medically necessary.”

Which brings us back to the real Democratic plan to pay for single-payer (whatever they call it): Dramatically increased rationing of care and gigantic tax increases. The latter won’t even fly in California, where the voters said yes before they saw the price, and even the politicians were afraid to double the tax burden on the long suffering citizens of the Golden State. This is one reason Congressmen like Devin Nunes and Dana Rohrabacher, not to mention the GOP seats being vacated by Ed Royce and Darryl Issa, turned out to be far safer than they appeared while under assault by hordes of Democrats exhibiting all the usual symptoms of TDS while shrieking about single-payer and Medicare-for-All.

The only way to stop single-payer is to make sure the Democrats fail to win a majority in the House or the Senate. And, when the family lefty starts gibbering about how the U.S. is the only developed country without universal health care and claims we need Medicare-for-All, suggest you’ll take him seriously when the Democrats produce some plan to prevent the Medicare program we already have from going broke.