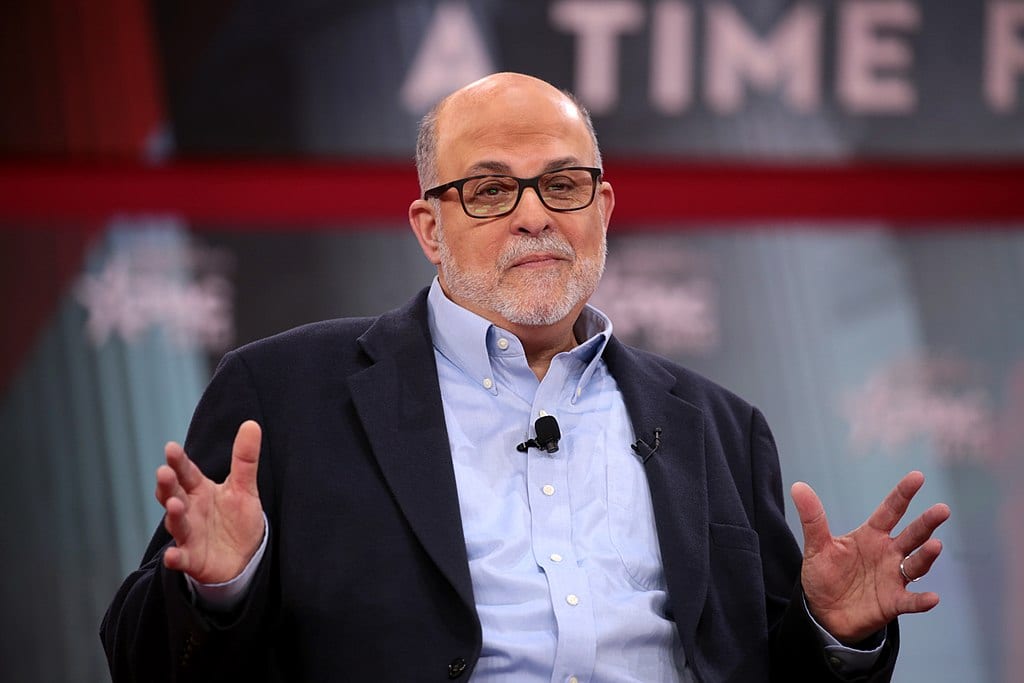 Right off the bat, Mark Levin nails it exactly in his new bestseller Unfreedom of the Press.

Unfreedom of the Pressis about how those entrusted with news reporting in the modern media are destroying freedom of the press from within….

Indeed, social activism, progressive group-think, Democratic Party partisanship, opinion and propaganda passed off as news, the staging of pseudo-events, self-censorship, bias by omission, and outright falsehoods are too often substituted for old-fashioned, objective fact gathering and news reporting. A self-perpetuating and reinforcing mindset has replaced independent and impartial thinking. And the American people know it. Thus the credibility of the mass media has never been lower.

Bingo. Truer words could not be spoken.

Mark’s objective with Unfreedom of the Press is “to jump-start a long overdue and hopefully productive dialogue among the American citizenry on how best to deal with the complicated and complex issue of the media’s collapsing role as a bulwark of liberty, the civil society, and republicanism…” Suffice to say, mission accomplished.

As usual, Mark Levin comes through with a history lesson that gives some perspective to where the press is today — and how it got here. An entire chapter is devoted to “The Early Patriot Press,” and instructive it is. In recounting the critical role played by the early pamphleteers and the handful of newspapers (“forty or fewer by 1775”) in making the cause for independence from Great Britain, the Harvard professor and historian Bernard Bailyn is cited for his considerable knowledge of the role of pamphleteering between 1750 and 1776. While newspapers were small in number, there were in fact hundreds of pamphlets produced. Perhaps one of the greatest pamphleteers, Mark notes, was Thomas Paine whose famous essay Common Sense was published in January of 1776. Paine’s 48-page pamphlet is, among other things, a bold condemnation of monarchy and hereditary succession, something progressives of today would surely applaud. But Mark zeroes in on a very real problem with the progressive media as it is today.

He asks just why progressive media is all too eagerly accepting and advocating of “the enormous power exercised today by lifetime-appointed judges, who micromanage more and more of society; unelected bureaucrats employed by scores of government departments and agencies, who legislate not through elected members of Congress but by the issuance of untold regulations and rules; and the surrendering of sovereign legal and policy authority to international organizations, thereby conferring decisions to organizations that exist outside the Constitution’s framework?” Or in other words, the monarchy and hereditary succession the early patriots fought so hard to be free of has in essence reappeared in the form of lifetime judges and career bureaucrats — all to the applause of progressive media.

Notably Mark reminds of the era between the 1780s and 1860s when seriously partisan newspapers became the rule rather than the exception. He says that “they had little to do with objective news. Quite the contrary, they deliberately reported everything with a political slant, and were intended to be biased.”

Importantly, unlike the party-press era, where newspapers lined up fairly evenly behind one party or the other or one candidate or the other, and transparently proclaimed their partisanship, the current party-press also differs in that news outlets are overwhelmingly supportive of the Democratic Party and hostile to the Republican Party — particularly conservatives — and these days, virulently antagonistic to President Donald Trump, his supporters, and his policies.

The degree of unanimity and vicious anti-Trump partisanship is so blatant that even former New York Times editor Jill Abramson said this of the Times and her successor as editor, Dean Baquet, in a recent book: “Though Baquet said publicly he didn’t want the Times to be the opposition party, his news pages were unmistakably anti-Trump.” She also throws in the Washington Post as well with this open hostility spewing from the news pages.

Mark details the assaults on Trump from the anti-Trump media — which is to say almost every outlet on cable and in print or cyber space. Trump is a racist, Trump is demented, Trump is treasonous, Trump is morally depraved etc., etc., etc. The open hostility to a president who won the presidency with the votes of over sixty-million Americans — not to mention hostility to his voters — is truly astonishing.

The very serious point here is in this sentence when Mark notes the reaction of the press when they are called out for their decidedly un-journalistic behavior.

In fact, they protest when called out and claim that they are protecting freedom of the press against their critics. But are they? Or does the threat to press freedom lie with them?

Mark illustrates the intolerance of the modern media with the story of NBC’s Meet the Press moderator Chuck Todd announcing that he has banned so-called “climate deniers” from his show, thus shutting down serious intellectual inquiry about a controversial topic when there are, in fact — as Todd and his producers well know — “many legitimate, credentialed, and serious scientists and climate experts who are either skeptical of or outright reject the claims of man-made climate change.” What Todd — and other “journalists” — are in fact about is propaganda, not objectivity and news. If ever there were a serious threat to press freedom, it doesn’t get more blatant than that.

Cited here is a book by Bill Kovach (the former Washington bureau chief of theNew York Times and former editor of the Atlanta Journal-Constitution) and Tom Rosenstiel (longtime media critic for the Los Angeles Times as well as chief congressional correspondent for Newsweek).

Kovach and Rosenstiel authored the book The Elements of Journalism, in which they “provide five ‘intellectual principles of a science of reporting.’” They are:

Well said. And most assuredly advice wildly ignored by a media that is determined to be advocates for what I call in this corner the Leftist State Media.

There is more in this book — oh so much more — that details precisely the quite serious problems with the modern media. Unfreedom of the Press is decidedly a must read to understand exactly what and why Americans are — and are not — reading, seeing, and hearing when they turn on or read more or less any “mainstream media” outlet.

Mark’s intention in writing this book, as mentioned, “was intended to ‘jump start a long overdue and hopefully productive dialogue among the American citizenry on how to best deal with the complicated and complex issue of the media’s collapsing role as a bulwark of liberty, the civil society, and republicanism.’”

And as I also said at the beginning of this column: “Mission accomplished.”