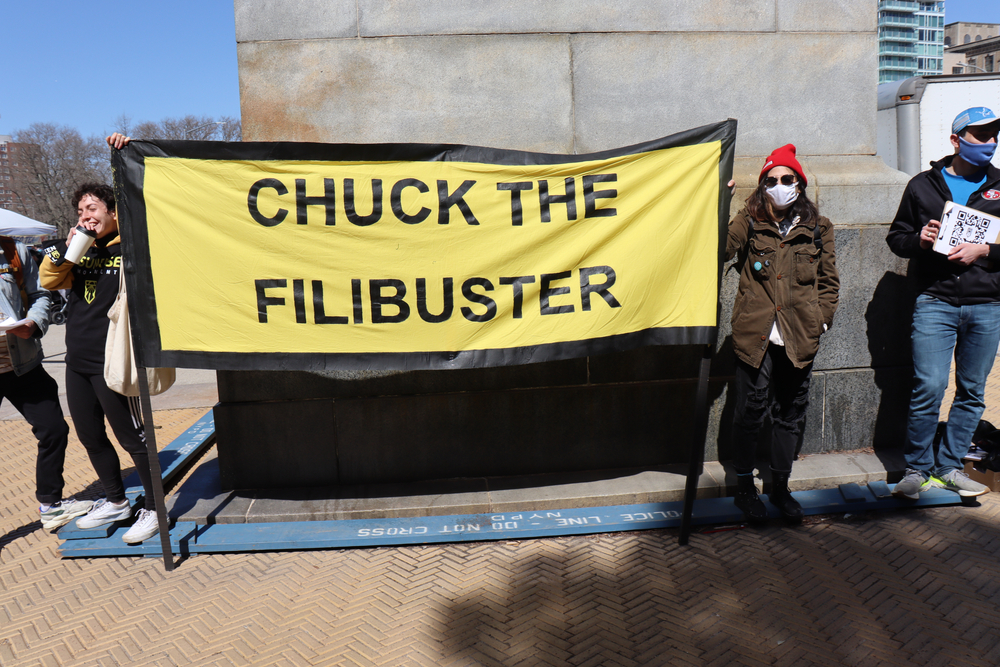 West Virginia Sen. Joe Manchin has once again been masquerading as a moderate while colluding with radical Democrats to betray his constituents. His latest act of perfidy was a “yes” vote on a procedural motion that would have moved the pernicious For the People Act (S 1) closer to passage in the Senate. This violated a pledge he made to Mountain State voters three weeks ago in an op-ed published under the title “Why I’m voting against the For the People Act.” He claims to have changed his mind after negotiating a compromise with Majority Leader Charles Schumer (D-N.Y.). But the bill on which Manchin voted “yes” was the same 800-page power grab introduced by the Democrats in March.

The motion inevitably failed because, in the absence of GOP support, it fell 10 votes short of the 60-vote majority required to overcome the filibuster. But Sen. Schumer got what he wanted — monolithic support from his caucus on its marquee bill. All Manchin received from Schumer was a promise to allow his compromise bill to come up for a vote if the Republicans rolled over on the filibuster. Neither believed this would happen, but both knew it would give Manchin enough cover to vote for S 1. It also provided a preview of the excuse he will use when it comes time to flip-flop on the filibuster. Just as he did when he announced his intention to vote “yes” on the For the People Act, he’ll blame the Republicans:

Unfortunately, my Republican colleagues refused to allow debate of this legislation despite the reasonable changes made to focus the bill on the core issues facing our democracy. As I have said before, the right to vote is fundamental to our American democracy and protecting that right should not be about party or politics. I remain committed to finding a bipartisan pathway forward because the future of our democracy is worth it.

Manchin failed to mention that his compromise bill retained the worst provisions associated with S 1 and offered no incentives for Republicans to support it. Indeed, his version added several bad ideas not included in the original. For example, Manchin’s bill would also have usurped reapportionment from state legislatures. But, instead of the “nonpartisan redistricting commissions” mandated by S 1, his plan would have used computer models. Manchin makes much of the fact that his bill would have required voter ID nationwide. But the proposal would have vitiated this fraud prevention measure by allowing voters to use easily forged alternatives like utility bills to prove identity.

Manchin’s compromise proposal was DOA in the Senate pursuant to the same fatal flaw that afflicts S 1. As Sen. Rob Portman (R-Ohio) put it recently in an interview with NBC’s Chuck Todd, “Unfortunately, what he does is what the larger bill S 1 does … it takes the election system in this country and federalizes it, so it’s a federal takeover of our election system.” This is so manifestly obvious that the For the People Act has failed to garner a single Republican vote in either house of Congress. The legislation is so egregious that even the most weak-kneed RINOs will have nothing to do with it. Even Rep. Liz Cheney (R-Wyo.) referred to S 1 as the “For the Politicians Act,” in a recent statement:

The past two weeks have proven that Speaker Pelosi and House Democrats are not serious about governing or leading our nation. The bill they brought to the floor today steals power from the people, violates Americans’ First Amendment Rights, and is designed to protect Democrat politicians. The legislation would force hard-earned taxpayer money to fund political campaigns and enable the federal government to control all aspects of our elections.

All of which brings us back to Sen. Manchin. Despite his rhetoric about bipartisanship, he has signaled that he is not averse to altering the filibuster. He has, for example, suggested making it “more painful” to use by returning to the “talking filibuster.” Forbes reports that Manchin recently told a group of donors he was open to lowering the filibuster threshold to 55 votes. He isn’t, of course, the only Democratic senator who says he won’t vote to kill the filibuster. When he finally flips, however, the scruples of Sen. Dianne Feinstein (D-Calif.), Sen. Tom Carper (D-Del.), and Sen. Mark Kelly (D-Ariz.) will evaporate. The ultimate survival of the filibuster depends on Sen. Kyrsten Sinema (D-Ariz.).

Sinema’s recent Washington Post op-ed defending the filibuster suggests that her position is based on genuine principle: “My support for retaining the 60-vote threshold is not based on the importance of any particular policy. It is based on what is best for our democracy.” Moreover, unlike Sen. Manchin, she hasn’t hinted that she’ll change her mind. Manchin, on the other hand, suffers from “dissociative ideology disorder.” He’s a common-sense Mountain State moderate when campaigning at home, but he morphs into a tool of the Left once safely back inside the Beltway. His filibuster pledge is worthless. He will renege on that promise, just as he did with his S 1 vote, and claim, “The GOP made me do it.”