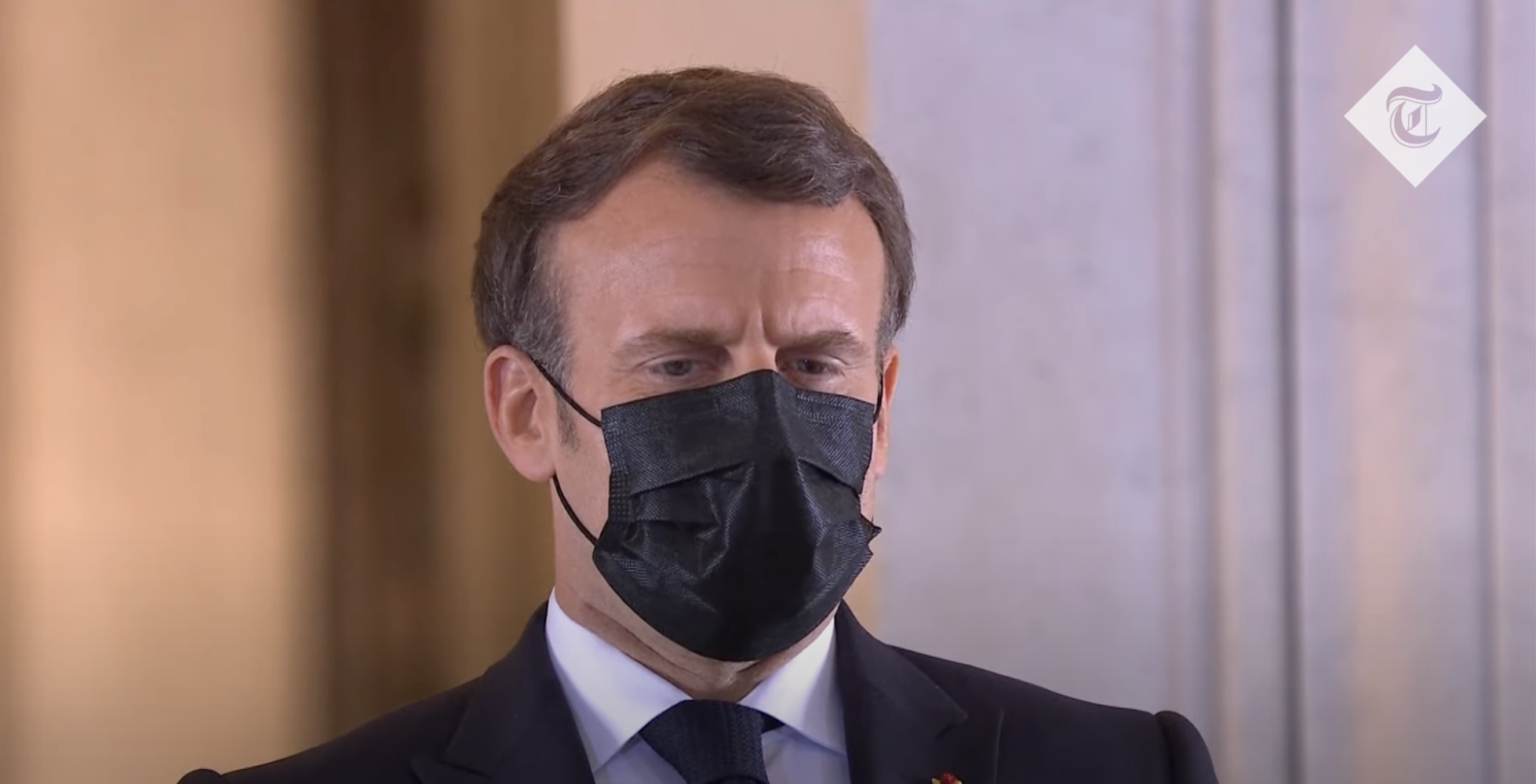 German Chancellor Angela Merkel recently joined top German political leaders to mark the passing of one of their nation’s most remarkable leaders. On April 30, they met at the lot above the location of the World War II bunker in which Adolf Hitler died by suicide 76 years before.

In her remarks, Merkel acknowledged the Nazi chancellor’s serious flaws but noted his enormous historical impact, adding that he inadvertently helped build modern Germany. Critics complained that she underplayed the enormity of his crimes, including the Holocaust.

On May 5, however, French President Emmanuel Macron did take his family and aides to place a wreath on the massive yet elegant red quartzite sarcophagus that serves as Napoleon Bonaparte’s final resting place, surrounded by monuments to his great military victories, in the Dôme des Invalides in Paris. Napoleon’s remains, which were transferred to France decades after his death, are the central feature of an entire complex celebrating the French military.

Macron’s largely laudatory remarks came as a surprise after his aides promised that he would follow a middle course to mark the emperor’s passing.

Macron visited on the bicentenary of Napoleon’s death, recorded at 5:49 p.m. on the island of St. Helena, to which he had been exiled. The French president lauded the “genius” who rose to power out of the French Revolution and crowned himself emperor while plunging all of Europe into war. The French president observed, “The destiny of the child from Ajaccio who became master of Europe shows that a man can change the course of history. We like Napoleon because his life has the taste of the possible, because it is an invitation to take risks.”

That might be true, after a fashion, though the people of France bore the greatest cost of his risk-taking. And that is a dubious standard for measuring human greatness. Hitler, too, was a geopolitical gambler, and he won most of his early bets, including the invasion of France. Of course, his attack on the Soviet Union turned out less well. Vladimir Ilyich Lenin risked all and gave the world the Bolshevik Revolution — followed by civil war, brutal repression, mass murder, party purges, international aggression, and internal stagnation. Mao Zedong’s “Long March” illustrated someone else willing to put all his chips on history’s grand roulette wheel, to the tragic detriment of his nation.

Indeed, Macron’s largely laudatory remarks came as a surprise after his aides promised that he would follow a middle course to mark the emperor’s passing. But with a difficult reelection campaign expected next year, Macron apparently was pivoting right, seeking the votes of nationalists enthralled by Napoleon’s many victories. Even today, the emperor inspires much more than any of France’s succession of largely mediocre kings, Louis XIV excepted, who came before.

Alas, Napoleon is a dubious symbol of the modern age. Macron acknowledged that Napoleon reinstated slavery, a notable stain on the record of someone long promoted as a technocratic, even liberal visionary who in between multiple military campaigns implemented the famed Napoleonic Code, which continues to be the basis of French law. Macron said the emperor’s support for slavery was a “betrayal of the spirit of the Enlightenment.”

More important, it was a terrible and tragic assault on the many people who were enslaved. Paris abolished the awful practice in 1794, after the successful revolt on the colony of Saint Domingue (present-day Haiti). Tragically, like most people in that age Napoleon did not see a problem with turning people into chattel. At that time slavery was widely accepted, including in America.

But Napoleon did more than tolerate an accepted and existing practice. He revived slavery — an action that is very difficult to spin today. The trade was not again abolished, permanently, until 1848. Over the centuries France may have turned as many as 15 million of its involuntary African subjects into abused Caribbean slaves.

This action was not Napoleon’s worst crime, however. Macron admitted that Napoleon “was never veritably concerned with human losses.” That is a very polite way to put it. The Napoleonic Wars, a name that well captures the emperor’s culpability, ran for a dozen years, from 1803 to 1815. No one knows how many people died in the seemingly perpetual conflicts — the truly endless wars of their time — but estimates range up to seven million. France, Britain, Russia, Prussia, Austria, Spain, and Portugal each lost more than 100,000 soldiers, some multiples more. Total combat deaths probably ran between 2.5 million and 3.5 million. Civilian deaths were substantial as well, but the range of estimates is far wider, from 750,000 to three million.

That was in a world with about one billion people, which means Napoleon was possibly responsible for the death of a half percent of all mankind at that time. Moreover, the comparative total death toll today would have been much higher. There are roughly eight times as many people alive now. That means the equivalent loss today from the Napoleonic Wars would be about 28 million.

Napoleon spread destruction, terror, and hardship all the way to Moscow, across the Mediterranean to Egypt, and even off America’s coasts, in the “Quasi-War” against the United States. Unwilling to accept defeat, from his first exile on the island of Elba he staged a quixotic attempt at a military comeback, sacrificing thousands more lives before being defeated at Waterloo and sent to the more distant island of St. Helena. Like other great tyrants, he demonstrated the power of the individual, the fact that one supremely talented, ambitious, and ruthless person in the wrong position and time could wreak enormous death and destruction.

Napoleon’s undoubted military genius — few military leaders in history can be considered in his league, let alone his equal — helped resurrect his reputation. France’s subsequent Bourbon kings left little mark. President and then Emperor Charles Louis Napoleon Bonaparte was but a pale imitation of his uncle and was brilliantly manipulated into war by the Prussian, and later united German, “Iron Chancellor” Otto von Bismarck. Napoleon III, as the nephew was known, then was ousted in disgrace after being captured along with his army by the Prussians in the 1870 Battle of Sedan. He died in exile in the UK three years later.

The republican leaders who followed Napoleon neveu sleepwalked into World War I, a conflict that ravaged France and cost an entire generation of young men. Paris won, but only with the aid of the United Kingdom, Russian Empire, and United States. French statesmen shared blame for the botched peace and disastrous response to Hitler’s rise.

In World War II, Germany quickly overwhelmed France and occupied much of the country for the duration of the war. In the postwar years, the republic was restored but suffered terrible and embarrassing losses in liquidating its empire, most bloodily in Algeria and Vietnam. In the former case, dissident officers even sought to stage a coup against the republic and later assassinate (on multiple occasions) President Charles de Gaulle. Paris remains a military power by the standard of Europe — only the UK similarly can and does intervene overseas — but there is little glory reflected in current French foreign policy or military action.

So Napoleon remains France’s moment of greatest military renown, and almost certainly will remain so. As they say, everything now is downhill. Some 50 generals and 25,000 other service members, including a number on active duty, recently issued a call to arms that could be interpreted as a barely veiled call for a coup.

The letter writers announced, “The hour is serious, France is in danger, several mortal dangers threaten it. We who, even in retirement, remain soldiers of France, cannot, in the current circumstances, remain indifferent to the fate of our beautiful country.” They concluded, “As we can see, it is no longer time to procrastinate otherwise, tomorrow the civil war will put an end to this growing chaos, and the deaths, for which you will bear the responsibility, will number in the thousands.”

While no one really believes that a French general will rise as Napoleon IV to reestablish the empire, almost six of 10 French citizens polled agreed with the letter’s sentiments. Moreover, while still viewed as unlikely, far-right nationalist Marine Le Pen could win next year’s presidential election. Even a close race would herald a new, and less honorable, era in French politics.

In the U.S., leftie mobs denounce historical figures for the crime of believing and acting like most everyone else at the time, reflecting the zeitgeist of the age. The purest progressives demand the ouster even of George Washington and Ulysses S. Grant from the public square for offenses that barely register on history’s scale. Anyone who fails a fastidious progressive’s modern moral sensitivity risks summary expulsion from the halls of history while the totalitarian cheerleaders of this age — Angela Davis comes to mind — are acclaimed as pioneers.

Even worse, with the ostentatious displays of Mao in Tiananmen Square and Lenin in Red Square, two of the world’s worst dictators remain celebrated, even venerated figures. Can the rehabilitation of and a Berlin mausoleum for Hitler be far behind?

Perhaps not, but we have just suffered the spectacle of the president of France, supposedly the fount of liberal revolution and government, celebrate a dictator who restored slavery to an empire and set the world aflame. And doing so was seen as a likely election boost for the centrist establishment candidate. Where are the progressives when we need them?

Maybe America’s founders aren’t so bad after all.