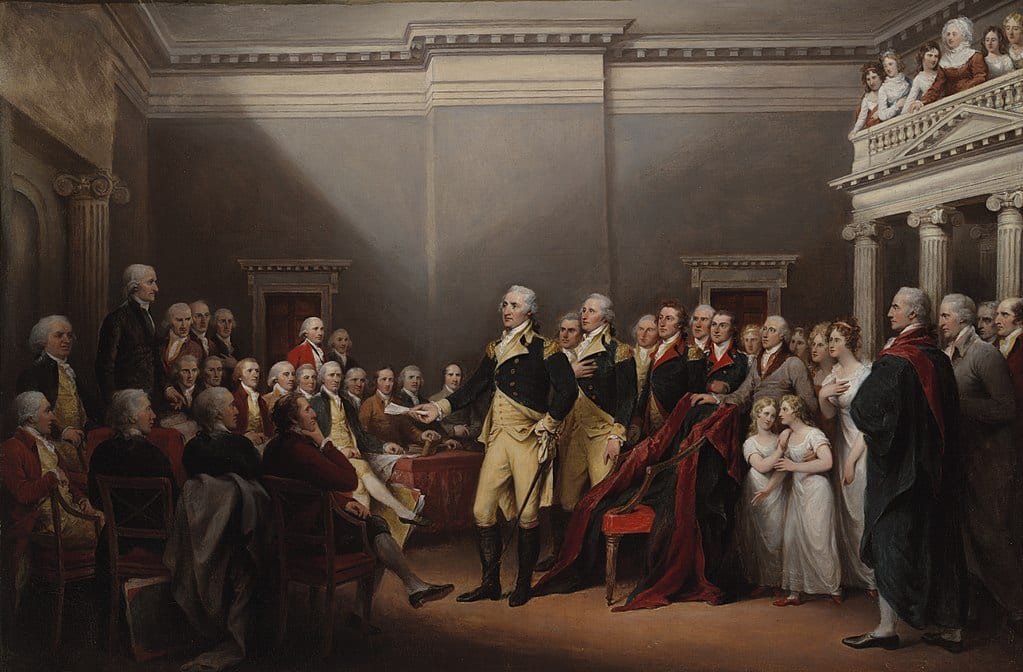 March was an important month for George Washington. He resisted the opportunity to become a military dictator in March. And he rode away from America’s presidency in March.

A man of action rather than ideas, the Virginia planter turned continental military commander turned national politician probably did more than any other person to make the United States. It was no easy task. And his most important act was perhaps the simplest: leaving office.

Looking back, we can see that his record was hardly pure. A troubled slave-owner, he disliked but did not challenge the institution. His generalship originally expected too much of poorly trained men, but his leadership helped sustain the fight. As president he underestimated the divisions among a people reluctantly living under a much-criticized Constitution. Yet he was the indispensable man, the chief executive most likely to be accepted as legitimate by all. Without him it is hard to imagine America having been born or having survived.

Yet he walked away from the pinnacle of power.

More than once Washington could have been king, in form if not title. He could have in 1783, after active hostilities had ended anger burst forth from soldiers long unpaid and taken for granted. Encamped at Newburgh, New York after the war’s effective end, they clamored for action against the Congress (serving under the Articles of Confederation). The threat was serious: Previously a memo on the subject had been sent to the legislature by several officers, warning that “any further experiments on their patience may have fatal effects.”

The national government, one in name only, had no money. Congress had no means to raise funds, instead depending on the states, which proved recalcitrant. So nothing was done, stoking soldiers’ anger. There is disagreement over whether the ultimate objective was to stage a coup or force action by appearing ready to stage a coup.

Washington forthrightly refused to direct the army against the civilian authorities. But in mid-March at Newburgh, two anonymous letters circulated advocating that an ultimatum be sent to the Congress, claiming Washington’s support and calling for a meeting of field officers. It was later learned that the documents were penned by an aide to the ambitious and vainglorious Horatio Gates, though the latter’s role is uncertain.

Washington took control, unexpectedly attending and addressing the gathering on March 15. He skillfully manipulated men hardened in battle with his famed Newburgh Address. He denounced the initial “anonymous summons” that brought the officers together: “How inconsistent with the rules of propriety, how unmilitary and how subversive of all order and discipline, let the good sense of the army decide.”

Recognizing that his leadership had been questioned, he observed, “But as I was among the first who embarked in the cause of our common country; as I have never left your side one moment, but when called from you on public duty; as I have been the constant companion and witness of your distresses, and not among the last to feel and acknowledge your merits; as I have ever considered my own military reputation as inseparably connected with that of the army; as my heart has ever expanded with joy, when I have heard its praises, and my indignation has arisen when the mouth of detraction has been opened against it, it can scarcely be supposed, at this late stage of the war, that I am indifferent to its interests.”

Then he cited the larger cause, saying, “This dreadful alternative of either deserting our country in the extremist hour of her distress, or turning our arms against it, which is the apparent object, unless Congress can be compelled into instant compliance, has something so shocking in it, that humanity revolts at the idea.” After stating his belief that the Congress would do justice to their claims, he closed with a call “to express your utmost horror and detestation of the man, who wishes, under any specious pretenses, to overturn the liberties of our country; and who wickedly attempts to open the flood-gates of civil discord, and deluge our rising empire in blood.”

He then clumsily opened a letter from a legislator to read and then pulled out his reading glasses, explaining, “Gentlemen, you will permit me to put on my spectacles, for I have not only grown gray but almost blind in the service of my country.” The incident, almost certainly choreographed, had the desired effect on the assembled crowd, many of whom were reduced to tears. After he left, it set up a committee that drafted a letter expressing “unshakeable confidence” in the Congress. At the same time, he sent the anonymous missives to legislators, who quickly approved payments for the soldiers.

After the Treaty of Paris, recognizing U.S. independence, was signed in September 1783, Washington resigned his commission and returned home, rather than ride to the capital in triumph. In this he was seen as a successor to Lucius Quinctius Cincinnatus, the legendary Roman general who in the fifth century B.C. supposedly saved his nation and, after victory, relinquished his dictatorial powers and returned to his farm. Whether the details were all true or not, the story served as an inspiration during the Roman imperium and beyond.

Washington also played an important role at the Constitutional Convention. His mere presence as the largely figurehead president gave the gathering credibility. His actions in Newburgh had communicated his commitment to a democratic political order, which likely discouraged proposals for a monarchy, even a constitutional one. His wartime aide, Alexander Hamilton, still pushed for the functional equivalent, a lifetime president: “The Supreme Executive authority of the United States to be vested in a governor to be elected to serve during good behavior.” The proposal went nowhere among revolutionaries barely a decade away from declaring independence from the king. Nevertheless, such an approach might have gained more traction if Washington had lent his support. He might have been seen as the good king, with more truncated authority.

After all, many of the delegates imagined Washington in the executive role. They would have entrusted him with more power than their more typical compatriots. If he had made the case for a more powerful official with more certain tenure, he might have transformed the debate over the new republic’s political order. State conventions would have been less likely to approve such a document — some of the victory margins were narrow as it was — but with his name more clearly attached to the resulting institution, nothing is certain. The result might have been lifelong tenure. If not, a more bitter discourse and failed ratification of a more extreme document would have left the states more divided and less cooperative.

Finally, he yielded power. This may be the supreme act of the statesman.

Washington demonstrated no lust for office, but instead answered the call of duty. If he wanted to be president, his desire was carefully concealed. As noted earlier, however, the convention delegates shaped the presidency with him in mind. Even though the Framers created a structure that dampened the impact of popular opinion, he clearly was the grassroots favorite as well. In difficult times, he was seen as the one figure who could unite contending factions. Indeed, as the overwhelming public choice for president his electoral college vote was unanimous — both in 1788 and 1792. The only genuine contest was for vice president, won by John Adams, who seemed to think more highly of the executive leadership than did Washington. (The former proposed that the latter be addressed as “His Highness, the President of the United States, and Protector of the Rights of the Same.”)

Washington chose not to run for reelection in 1796. He was tired and ready to return to his farm, like Cincinnatus. He had wearied of the bitter divisions between Federalists and Republicans. He explained his decision in his lengthy Farewell Address, largely written by Hamilton: “[B]e assured that this resolution has not been taking without a strict regard to all the considerations appertaining to the relation which binds a dutiful citizen to his country; and that in withdrawing the tender of service, which silence in my situation might imply, I am influenced by no diminution of zeal for your future interest, no deficiency of grateful respect for your past kindness, but am supported by a full conviction that the step is compatible with both.” Washington went on to offer a great deal of advice for his “beloved country.”

This was not someone consumed with a desire for power. He seemed like an exotic rarity at the time. When apprised of Washington’s intentions, King George III observed of his late enemy: “If he does that, he will be the greatest man in the world.”

Even when out of office Washington was approached to run again but declined again. In June 1799, Connecticut Gov. Jonathan Trumbull Jr., who had served as Washington’s military secretary during the war, wrote Washington urging him to run. Otherwise, opined Trumbull, “the next Election of President, I fear, will have a very illfated Issue [sic].” Washington refused, worried, among other things, of being charged “with concealed ambition.” Prudence, wrote Washington, “must arrest any attempt of the well meant, but mistaken views of my friends, to introduce me again into the Chair of Government.”

So powerful was Washington’s example that no president ran for a third term until Franklin Delano Roosevelt in 1940. And after the latter’s death, a constitutional amendment made the two-term limit the law.

The Ides of March usually brings to mind the assassination of Julius Caesar, a military conqueror turned political dictator. For Americans the Ides of March was the moment when their triumphant military commander eschewed seizing political power, dictatorial or other. Without his example, the American experiment might have foundered at the start.