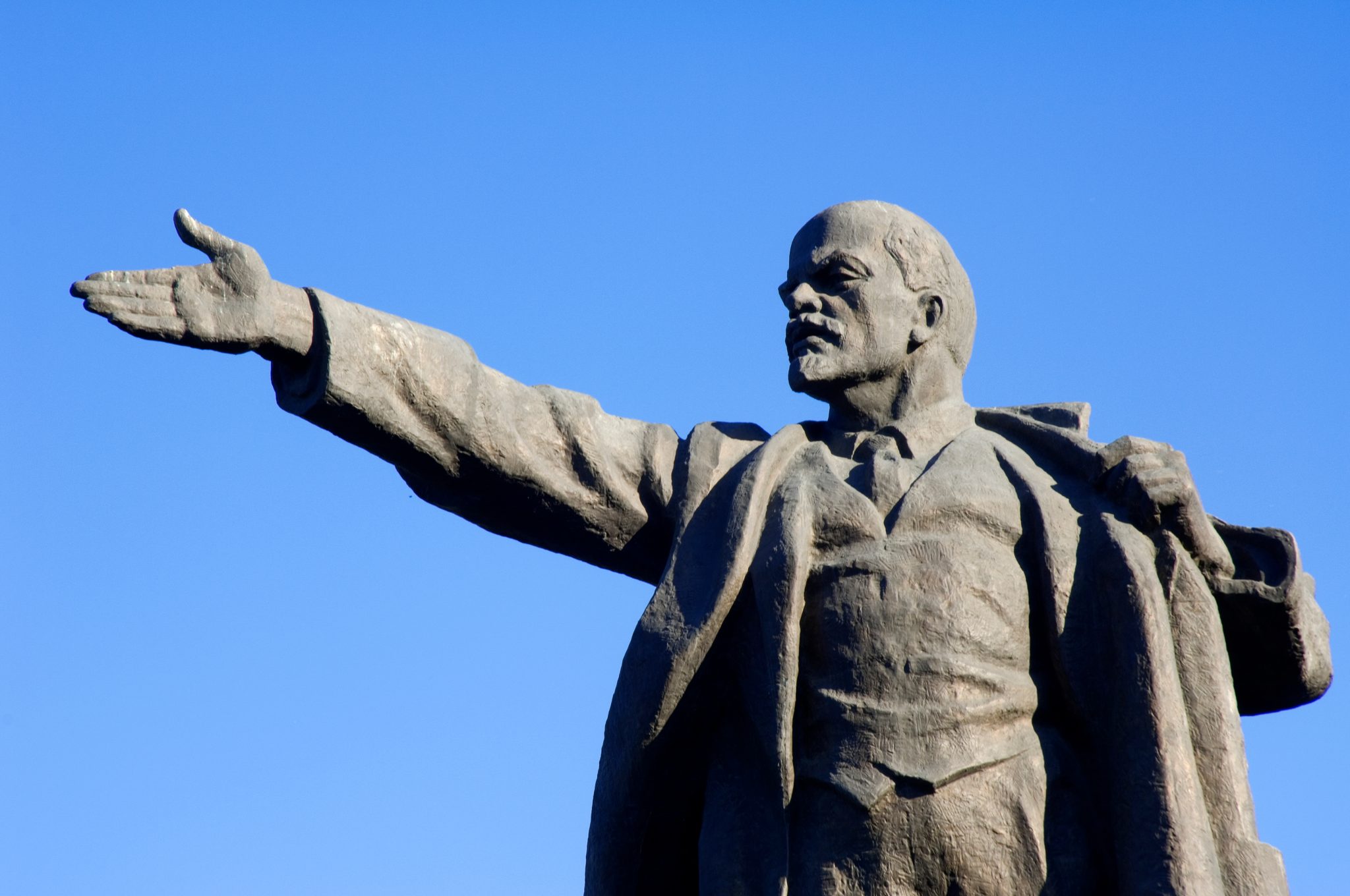 In September 1917, Russia’s collapse was imminent. Unbeknown even to the Bolsheviks, they were poised to stage the second Russian Revolution — tragically, the decisive moment that set that great land’s course for more than seven decades. Hence the birth of the Evil Empire, as Ronald Reagan later called it. And it wouldn’t have happened without the effort of one extremely determined, dangerous, and evil man, Vladimir Ilyich Ulyanov, better known by his underground nom de guerre, Lenin.

World War I was one of humanity’s great catastrophes. The war involved most of Europe as well as the U.S. and Japan, killed around 20 million people, and wasted untold wealth while spreading enormous destruction. One democracy, Italy, barely outlasted the war. Two democracies, Britain and France, were enervated for a generation. Four empires collapsed: Austro-Hungarian, German, Ottoman, and Russian. The first three disintegrated in the conflict’s aftermath. Russia, desperately ill-prepared, horribly led, and tragically divided, collapsed less than three years after the first shots were fired.

In March 1917, bread riots broke out in Petrograd, Russia’s capital — renamed at the war’s start since St. Petersburg sounded too German. Tsar Nicholas II was decent but limited, a man who dramatically fulfilled the Peter Principle. As Russia suffered on the battlefield, usually defeating even less competent Austria-Hungary, while losing much more dramatically to Germany, the tsar took over as commander-in-chief and joined the army headquarters, making the military’s failure his own.

Even more competent ministers back home could not have easily managed the ramshackle, largely rural empire. It was headed by an antiquated monarchy with diminishing legitimacy, amid widespread demands for serious political reform mingled with calls for violent revolution. As popular frustration boiled over in the capital, troops tasked with crushing the protests instead joined the people. The regime tottered, the tsar abdicated, and a provisional government arose, along with multiple workers’ and soldiers’ soviets, or councils.

At that dramatic moment the Bolsheviks were of no account. Lenin was a lifelong revolutionary whose brother, Alexander, had been executed for conspiring to murder Tsar Alexander III. Lenin was radicalized, imprisoned, and exiled. He settled in Zurich, Switzerland, where he helplessly watched the grand events from afar. His frustration was intense when revolution hit Russia, since he was stranded in the center of Europe, separated from his homeland by hundreds of miles of enemy-held territory.

However, the German government was eagerly watching events in Petrograd. The wealthy businessman Alexander Lvovich Parvus, a Russian communist who had moved to Germany and worked with German intelligence, convinced Berlin of the benefits of a rather unconventional alliance of “Prussian bayonets and Russian proletarian fists.” (After the war he wisely settled in Germany, not the Soviet Union, and died in 1924.) Lenin became Berlin’s ultimate secret weapon.

The provisional government declared its continued loyalty to the other Entente powers but was weak and the war was unpopular. Berlin provided the Bolsheviks with subsidies and Lenin, along with 31 colleagues and family members, with a train to Russia. He left on April 9, arriving at the famed Finland Station a week later.

No one would have bet on victory by the small group of radicals, least of all the Germans, who mostly hoped to stir up trouble and encourage chaos. However, the center-left provisional government launched a military offensive in late June, which collapsed after some initial success. The Bolshevik slogan, “Peace, Land, and Bread,” became increasingly popular, especially among soldiers tired of being treated like cannon fodder in a war that made no sense to them. The German army was pleased with the results of the Lenin gambit, reporting to the foreign ministry that “Lenin’s entry into Russia was a success. He is working according to your wishes.”

In early September the provisional government was roiled by an apparent far-right takeover attempt by the army commander-in-chief. The government, headed by socialist Alexander Kerensky, turned to the Left, a mix of communist and revolutionary factions, for support. The revolt collapsed on the 12th. The next day the Petrograd soviet, dominated by the Bolsheviks, demanded a government without representatives of the bourgeoisie.

The provisional government moved left, Bolshevik influence increased, the regime’s credibility dissolved, and on November 7 Lenin & Co. staged a coup. The troops in Petrograd feared being sent to the front and left the provisional government to its own devices. Kerensky fled (years later ending up at Stanford’s Hoover Institution). In the run-up to the revolution the Bolsheviks had been embarrassed by revelations of their dependence on German funds. However, the following year the victorious Lenin celebrated having made the Russian Revolution with Berlin’s money, triumphantly telling a party conference: “I would, however, like to add that we will stage a similar revolution in Germany with Russian money.”

Although communist control was far from secure — the takeover triggered a civil war that raged until 1923, drawing allied intervention, including by America, and killing as many as 12 million people, mostly civilians — Germany’s Lenin weapon had worked spectacularly. Alas, only in May 1945, when Berlin was occupied by Soviet troops and another generation of German leaders were forced to surrender to Joseph Stalin’s Soviet Union, was the full magnitude of the ill consequences of that act 28 years before fully obvious. Sending Lenin had seemed like such a good idea at the time!

The rest, as they say, is history.

Lenin well illustrates the power of a prescient, charismatic, and implacable individual at a critical moment of history. He was utterly ruthless and understood how to amass and wield power. Other Bolsheviks were capable, especially Leon Trotsky. The latter was seen in exile as an intellectual and cerebral opponent of Joseph Stalin. But Trotsky was no ivory tower theorist: he had been war minister, played a major role in defeating the “Whites” during the civil war, and led the offensive that crushed dissident sailors and others in the Kronstadt rebellion in March 1921.

Nevertheless, Lenin always seemed to best grasp political essentials. For instance, most of the Bolshevik party opposed the harsh terms set by victorious Germany in the Treaty of Brest-Litovsk. Lenin understood that it was the continuation of the war that had made the communist takeover possible. And if the Bolsheviks refused to make peace the Russian people would look to others for relief. He insisted that the party’s most important task, looming above everything else, was consolidating control.

After a series of strokes Lenin died in 1924, only 53 years old. His death triggered an extended power struggle that ended only in 1938, with the execution of the last original Bolshevik leader, Nikolai Bukharin. The latter, a “rightist” in Soviet-speak, had, like Trotsky and the rest of those around Lenin, underestimated Stalin. The latter’s crimes soon became evident to all, but many communists sought to excuse Lenin. The latter was said to have been dedicated to building a wonderful new society without all the brutality and violence that followed.

Of course, this was complete nonsense. Lenin was the consummate revolutionary, dedicated to the singular end of seizing power. His writing is filled with demands for brutal, violent action. After the revolution he sought to stiffen cadres for the hard work of oppressing the Russian people. He orchestrated Bolshevik participation in the civil war, one of unparalleled violence and horror. He probably ordered the murder of the tsar and family, who were being held in Siberia when White forces neared. Lenin established the secret police, originally called the Cheka and run by the Polish communist Felix Dzerzhinsky. Finally, Lenin elevated Stalin to party general secretary. Lenin later had second thoughts about his choice, but over Stalin’s lack of common civility rather than murderous instincts.

The Russian Revolution should teach us many things. War is far more likely to destroy than create. Ideas can be as powerful as armies. Individual actions matter. Bad decisions can have catastrophic consequences.

Perhaps most important is the lesson of the danger of believing that one can socially engineer complex peoples and nations, despite different systems, histories, religions, ethnicities, cultures, traditions, and more. Blowback is almost certain. And the unintended consequences can be devastating.

Berlin officials were too clever by half in April 1917 when they sent Lenin back to Russia. It was years before their mistake was evident to all. Tragically, humanity had to pay a hideous price until Christmas Day 1991, when the Soviet flag was lowered from the Kremlin for the last time.

Doug Bandow
Follow Their Stories:
View More
Doug Bandow is a Senior Fellow at the Cato Institute.
Most Popular
1
Biden Watch
Joe Biden Versus We the People
by Josh Hammer