This will come as no surprise to anyone who’s been on Facebook the last year, but new polling shows that liberal women are the most likely to unfriend people who disagree with them politically. 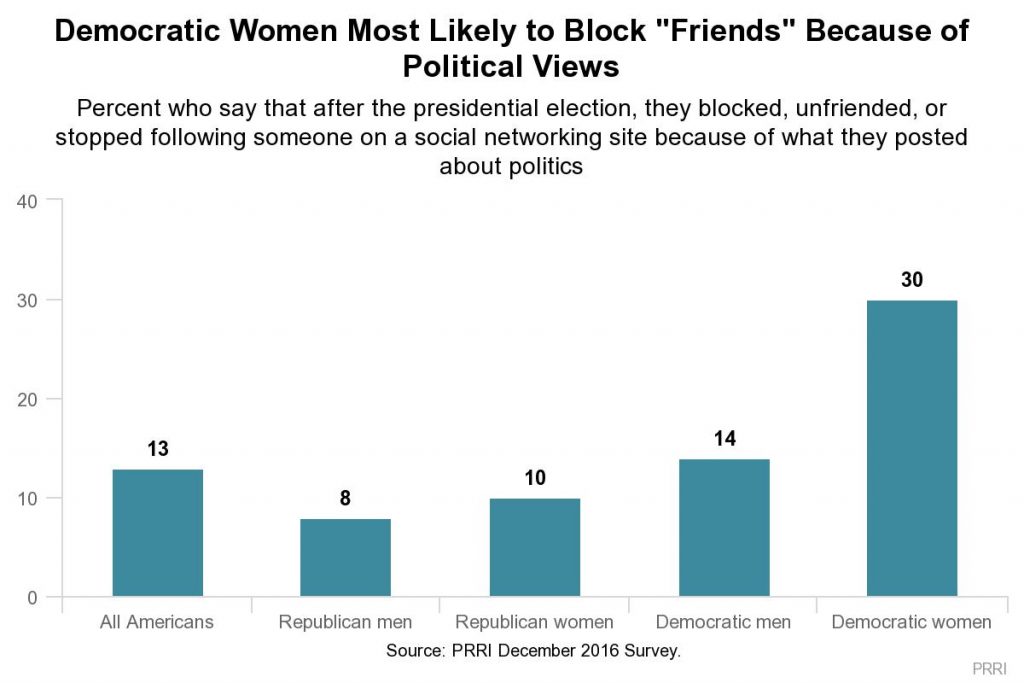 Only 13% of the public say they blocked, unfriended, or stopped following someone on social media because of what they posted about politics. Again, sharp political divisions emerged in the tendency to remove people because of the political opinions they expressed.

Nearly one-quarter (24%) of Democrats say they blocked, unfriended, or stopped following someone on social media after the election because of their political posts on social media. Fewer than one in ten Republicans (9%) and independents (9%) report eliminating people from their social media circle.

Political liberals are also far more likely than conservatives to say they removed someone from their social media circle due to what they shared online (28% vs. 8%, respectively). Eleven percent of moderates say they blocked, unfollowed, or unfriended someone due to what they posted online. [Emphasis added throughout.]

Why are political liberals generally, and liberal women in particular, so intolerant of other points of view?

In the last eight years, where conservative women and men have seen their liberal counterparts win on nearly every cultural issue from abortion to gay marriage to men dressing as women using women’s bathrooms, etc., conservatives have not unfriend their liberal, cheering counterparts.

Obamacare, the bane of conservative-libertarian existence, was passed without a single Republican vote or participation, and conservatives did not unfriend their triumphant liberal friends.

Nonsensical business decisions that could have created or kept jobs were ignored in service of environmental concerns and conservatives endured their feather-brained counterparts.

Liberals looked the other way, continue to look the other way, as the government’s agencies were politicized and investigated political enemies using the IRS, EPA, and nearly every agency as a cudgel to harm individual citizens simply for their conservative political beliefs. And even then, conservatives did not unfriend their friends and neighbors.

Now, a Republican had the temerity to get elected and Liberals, especially women, are unfriending people who simply voted differently than them. Not one policy has been pushed. Not one vote has been taken. The Republican hasn’t even taken office.

This is the tolerance of the Left. Submit to their worldview or be subjected to shunning. It’s absolutely pathetic. It’s infantile. It’s un-American. Part of being a melting pot is that we come from every race, creed, and ethnicity, with varied belief systems, and we come together despite our differences.

Bonus: Liberals crying after the election.