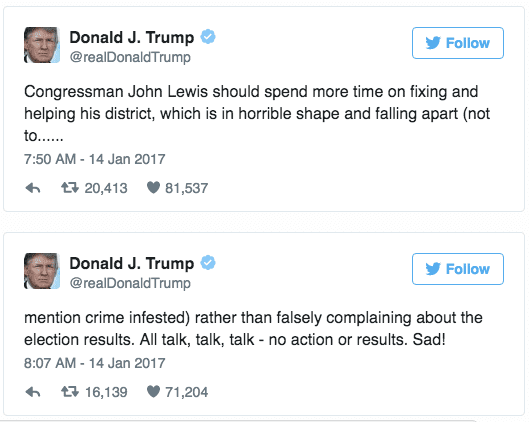 Throughout the years Rep. John Lewis has repeatedly leveled scurrilous accusations against Republicans who might resist the liberal agenda. And all along, Lewis has been shielded from retaliatory criticism by both his race and his 1960’s record of civil rights activism.

This past week began Lewis grandstanding at the Jeff Sessions confirmation hearings and ended with his pronouncement of Trump as an “illegitimate president,” drawing fire from the President-Elect.

The most refreshing thing about Donald Trump is his complete lack of deference to the restrictive speech codes of political correctness. You are not supposed to criticize the untouchable John Lewis–especially on the eve of Martin Luther King Day!

But, of course, Trump did just that:

Lewis represents the 5th House District of Georgia. Trump’s criticism of it is a bit of hyperbole. But only a bit. Consider:

-In 2016, Atlanta’s high school graduation rate was 71.5 percent. Nationally the rate is 82 percent.

–According to the Atlanta Journal and Constitution, about “1 in 6 families in the district lived in poverty in the previous year. The same dataset estimated the national rate to be about 1 family in 9.”

Lewis has been in Congress for 30 years, yet what do the voters of the 5th District have to show for it? If Lewis truly wishes to withdraw his approval of a Trump/GOP-led government, he should go beyond an Inauguration Day boycott towards a “total boycott” and promptly remove himself from Congress.