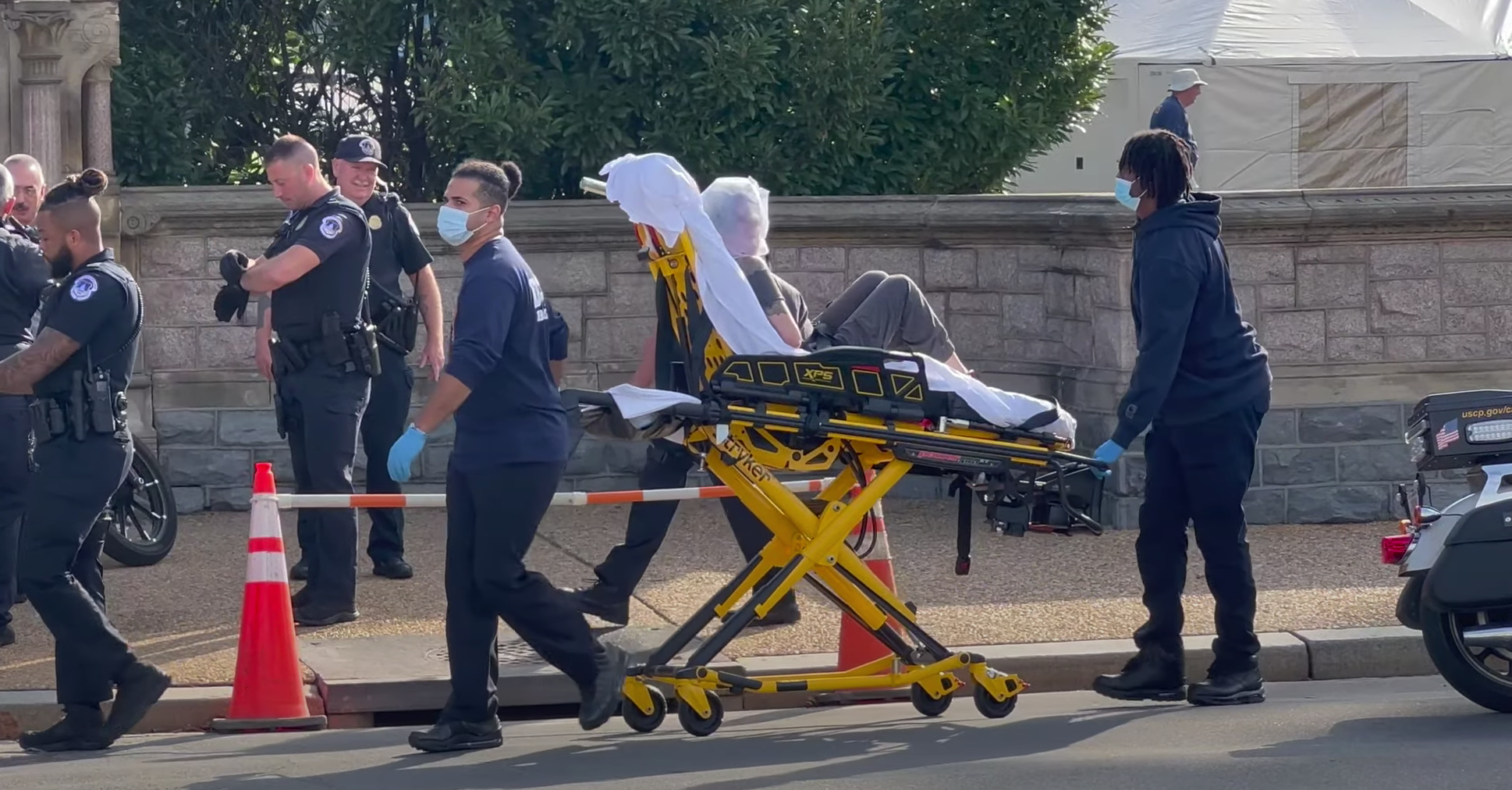 On Friday morning, U.S. Capitol Police arrested a 25-year-old woman who was brandishing a bat. During the altercation with police, the young woman allegedly bit one of the officers.

Frank Figliuzzi, a “national security expert” who regularly appears on MSNBC and is known for pushing goofy conspiracy theories, tweeted about the incident:

In the replies to the tweet, internet lefties presumed the attacker must have been a right-winger, an ivermectin injector, or even Rep. Marjorie Taylor Greene. A brief observation of the suspect makes it abundantly obvious that this was not the case. A photograph of the arrest depicts a young woman with short, brightly colored hair wearing an “End the Damn Wars” T-shirt.

“End the Damn Wars” is the name and slogan of a relatively new radical “anti-war” group. Its first event was an anti-war protest on 9/11, but it has since joined broader protests which claim that the Department of the Interior is failing to protect the environment and is harming Native Americans. On Thursday, anti-DOI protestors pushed into the department’s D.C. office and began to occupy it; police had to physically remove the protestors from the government facility. Secretary of the Interior Deb Haaland, who has ushered in unprecedented environmentalist policies and is a Native American herself, was not present during these events.

On Friday, the alleged cop biter entered the fray:

Today’s the day. Headed to #WashingtonDC to protect our Indigenious Water Protectors & allies being illegally arrested by @POTUS @JoeBiden Secret Service for peacefully protesting. This shit cannot stand. We The People are taking back our power. #GeneralStrike #RevolutionNow ✊💜 pic.twitter.com/SaTuT5toBX

Olivia “Liv” Romano, a Maryland resident, proudly proclaimed that she was headed to the protest, bat in hand. The day didn’t end the way she likely anticipated.

This is not her only recent encounter with law enforcement. On Thursday, Romano posted a video of a confrontation with a police officer who had pulled her over for a missing front license plate. When he asked for her license and registration, she told the officer that “I absolutely hate cops,” and that he was part of a “systemically racist system.” Watch here:

The rest of her Twitter is filled with other examples of far-left views and schizotypal behavior.

According to her LinkedIn profile, Romano was a state delegate candidate for the Maryland Green Party. She has a master’s degree in epidemiology and was employed as a COVID contact tracer. Not exactly the Trump voter that the mainstream media portrays those who attack government institutions as.

Articles at the Daily Beast and CNN, aside from getting the suspect’s name wrong, make zero mention of her obvious political beliefs, and frame the story around the January 6 “insurrection” and threats of right-wing extremism. “End The Wars” has stood by Romano and called for her swift release.

This incident is reminiscent of another post-January 6 event at the Capitol, one that was deadly. On April 2, 25-year-old Noah Green, a follower of the Nation of Islam, rammed his car into a Capitol barricade, killing one officer. Green brandished a knife at officers and was shot and later died. The initial assumption was that the attacker was of course a “right-wing extremist” but this was not the case.

Acts of political terrorism and violence in America are rare when compared to other crimes, and right-wing acts of terrorism are far less common than the mainstream media would have you believe. Acts from the Left are uncommon as well, but go completely ignored when they do occur. Everyone knows Brian Sicknick’s name, nobody knows who William Evans is.

This latest, somewhat ridiculous, example of a bat-wielding biter is just the latest example of political violence from the Left that is misrepresented or brushed over by the media.

Political violence and terrorism are never acceptable. Most on the Right accept this and are quick to condemn it when violence comes from their side.

The Left ignores political violence on its side, and the media plays along, creating blind spots in our national security and the safety of our citizens.