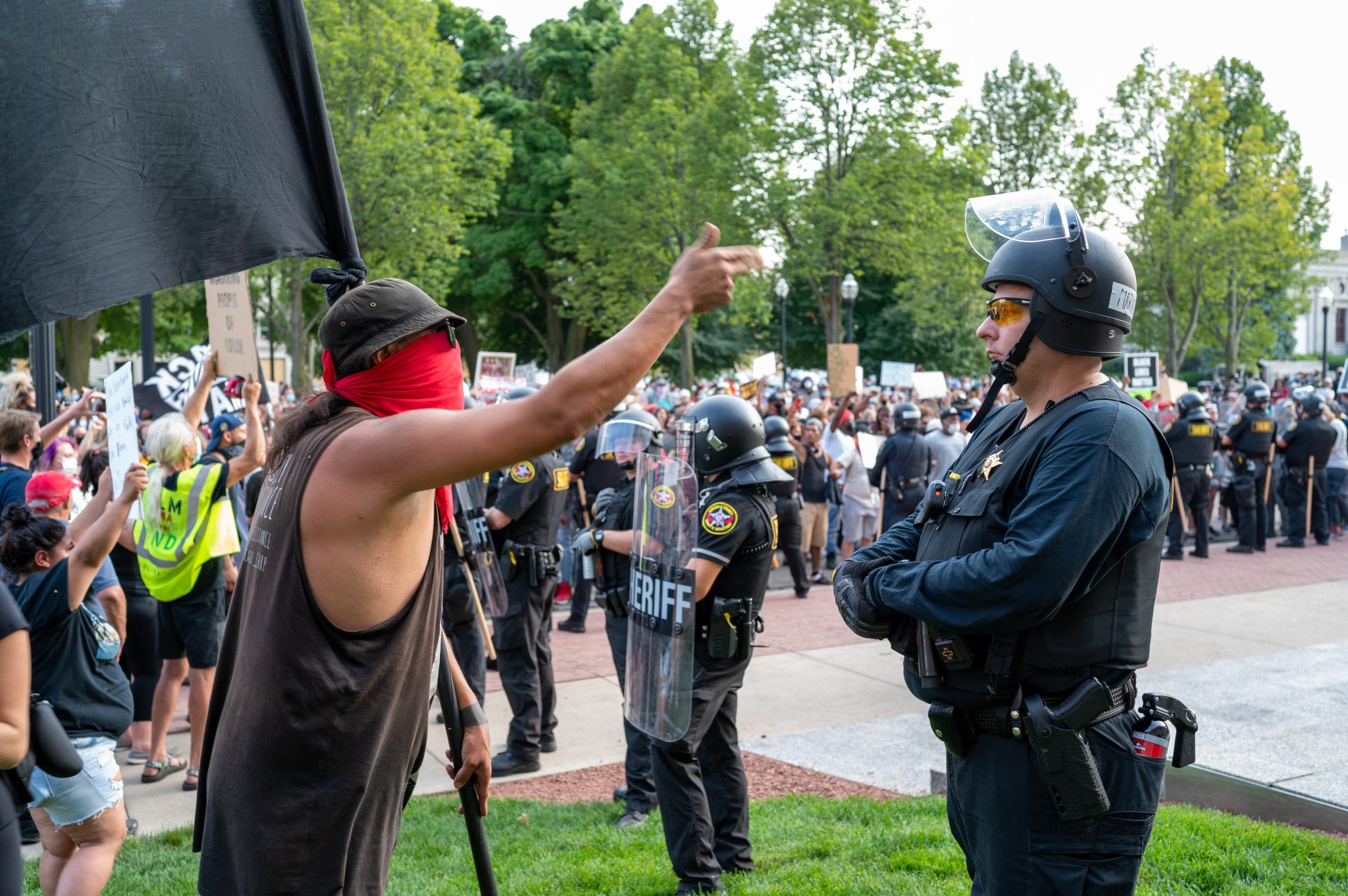 Richard J. Daley, the old-school mayor of Chicago, told the city’s superintendent during the riots that followed Martin Luther King Jr.’s assassination to “shoot to kill any arsonists” and “shoot to maim or cripple anyone looting.”

Another of President Lyndon Johnson’s staunchest allies offered a similarly sanguine prescription to the unrest taking place on campus that same month. “It would have been a wonderful thing,” longshoreman philosopher Eric Hoffer later testified before a Senate committee about the Columbia University student takeover, “if [Columbia President] Grayson Kirk got mad and got a gun and killed a few.”

They don’t make Democrats like they used to. But occasionally years, and usually not the good ones, reincarnate.

Vice President Mike Pence summed up 2020 as “this year like no other” during his Republican National Convention speech this week. But a 1968 vibe, when riots challenged a shared ethos of law, order, and patriotism, reverberates in the 2020 campaign.

The current capital of the Disunited States of America sits just short drive north from Mayor Daley’s Chicago. And now (as then), the zeitgeist seduces powerful voices to abdicate responsibility.

“We must dismantle systemic racism,” Joe Biden reacted to Kenosha. Tony Evers, speaking like a Wisconsin Ph.D. and not the governor of Wisconsin, chalked up the destruction to the “pain, anguish, and exhaustion of being black.” Lt. Gov. Mandela Barnes told the public that Jacob Blake, the man shot after resisting arrest, really attempted to “deescalate” a tense situation. “This wasn’t bad police work,” he said Monday night. “This felt like some sort of vendetta taken out on a member of our community.”

The fire called for water. The politicians brought gasoline.

The rhetorical accelerant spread very real destruction, even if CNN managed to place a chyron reading “Fiery But Mostly Peaceful Protests After Police Shooting” under a reporter wearing protective gear in front a scene from Escape From New York meets Towering Inferno.

When the Antifa hits the fan, everybody wants law and order.

Two “peaceful” protesters died in Kenosha on Tuesday night, a third lost a huge chunk of meat from his arm, and a 17-year-old, from several towns away in Illinois, now sits in jail on charges that he “murdered” two men who first used deadly force against him — all the result of a peculiar legal taxonomy, white-on-white crime. In addition to mud runs and farmer’s markets, stuff white people like includes show-offy intrusions into other people’s causes in the name of some platitude masquerading as a principle. This describes all parties, who though they differ in outlook share an enthusiasm for the most powerful narcotic of all: self-righteousness. We now know four heretofore anonymous people for the worst moments of their lives because they imagined themselves as doing good. Bad things happen after curfew.

It lacks the plaintive pull of “I can’t breathe.” But this is 2020, when “peaceful protest” encompasses Molotov cocktails, “civil rights” means depriving others of theirs, and “activists” loudly issue racial slurs rather than take offense to them.

An aggressive white man in Kenosha, Wisconsin, allegedly seen on video hurling a fiery item at a white teenager moments before the cornered, scared youngster shot him in the head, repeatedly yelled that racial slur in the presence of unruffled African Americans at a Black Lives Matter gathering near a used-car lot. The teenager, along with other armed men, impeded, at least temporarily, the mob from its ambition of torching some of the small businessman’s inventory, which really enlightened people understand as a First Amendment–protected expression of anti-racism but everyone else regards as just, well, incendiary.

The shooter initially checks on the 36-year-old man he shot. The mob descends on him. He raises his hands in a surrendering motion. The mob chases the self-defender. Pursuers yell, “Get his ass,” “Get ’em,” “Get that dude,” and other verbal cues indicating that the critics of police brutality do not so much dislike the “brutality” part as they do the “police.” As the gunman flees the mob, he endures a punch from one individual. Another, who smashes him over the head with a skateboard, endures a lethal bullet wound to the chest. Another vigilante pursuer stops his chase mere feet from the downed gunman after hearing a shot and then again approaches, which results in a bullet taking out a massive chunk of his arm.

We know this happened because the real media, in this case Elijah Schaffer (the Andy Ngo of Kenosha), Richie McGinniss, and others, documented what the fake media tries to distort. We see with our own eyes that a man throws a fiery projectile at the 17-year-old before he shoots his pursuer and that another adult slams a skateboard over the head of the kid who shoots him. The facts really complicate the narrative. None dare call that justifiable homicide, at least none in the beleaguered criminal justice system in Southeastern Wisconsin. A jury likely does.

When the Antifa hits the fan, everybody wants law and order. Even Kenosha’s activist-arsonists shouted, “Call the cops,” when comrades took bullets. That’s how anarchy always ends, with a dose, and hopefully not an overdose, of law and order. In 1968, Americans ended the lawlessness by voting for Richard Nixon and Spiro Agnew. Fifty-two years later, Donald Trump and Mike Pence, at their re-coronating convention, offered disincentives rather than rewards to the rioters, looters, and arsonists.

More than a half century ago, some Democrats warned against the destructive political path of patting destructive types on the back.

“Senator [Abraham] Ribicoff displayed historical illiteracy when he accused Mayor Daley and the Chicago police of being Gestapo,” Eric Hoffer explained in the aftermath of the riots in Chicago during 1968’s Democratic National Convention. “It was precisely because the Weimar Republic had no Daleys and no Chicago police to fight in battles in Germany’s cities during the 1920s that the Nazis and their Gestapo came to power.”

Joe Biden needs to pick what Democrat he wants to be, the Richard Daley and Eric Hoffer type or the Abraham Ribicoff and George McGovern type.

One either learns from history or becomes it.