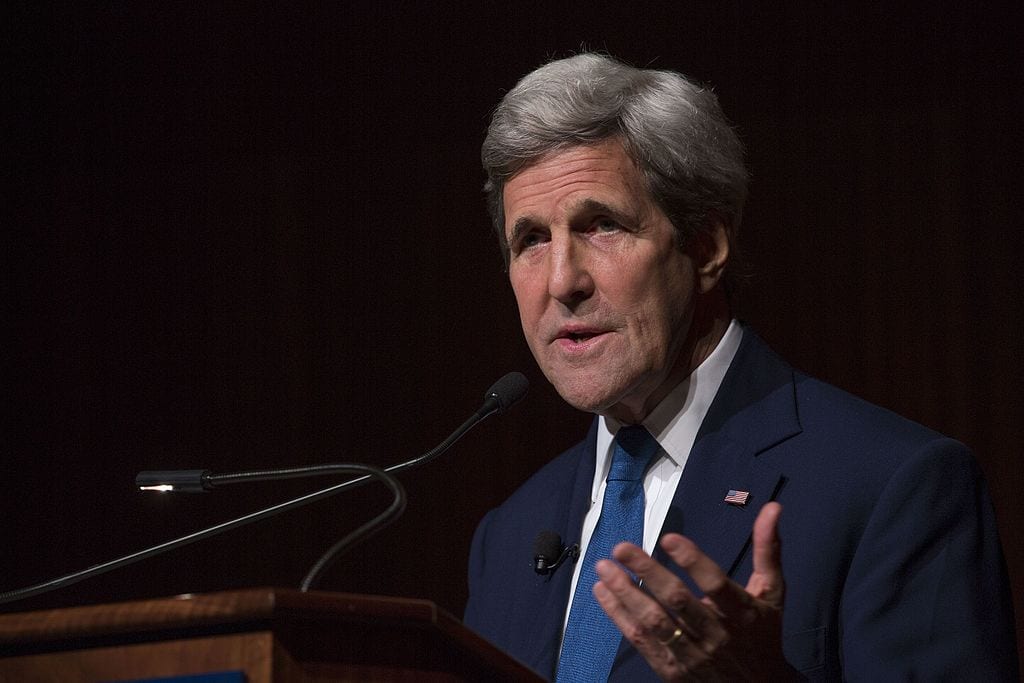 Many people — including the president of the United States — want to know if Kerry’s actions constitute a violation of the Logan Act. It’s a question I’m frequently asked about Kennedy. The short answer, in both cases, is that I’m not the source to provide the answer. Congress is. The Democratic Congress in the 1980s didn’t hesitate to launch criminal proceedings against President Ronald Reagan and his staff (many of them fine men of great integrity) in a militant pursuit for impeachment over “Iran-Contra.” Liberal Democrats did so while turning a blind eye as their leader — House Speaker Jim Wright — buddied up to Sandinista dictator Daniel Ortega in his own negotiations.

And Wright wasn’t secretary of state, just as John Kerry wasn’t secretary of state when he conferred with Iranian officials in secret meetings in New York. In what the Boston Globe described as a “rare move” of “unusual shadow diplomacy,” Kerry met with the Iranian foreign minister (among other high-level foreign officials) “to discuss ways of preserving the pact limiting Iran’s nuclear weapons program. It was the second time in about two months that the two had met to strategize over salvaging a deal they spent years negotiating during the Obama administration, according to a person briefed on the meetings.”

And that’s hardly the only Kerry outrage. No, this is old-hat. I’d like to remind all of Kerry’s affront decades ago. The date was April 22, 1971, 47 years to almost the exact day that Kerry met with the Iranians.

That moment, too, included yet another unsavory role by Ted Kennedy. Senator Kennedy helped arrange for the young Kerry, a Vietnam vet, to testify before the Senate Foreign Relations Committee, courtesy of Senator J. William Fulbright, hero to a young Bill Clinton, another vocal Vietnam War opponent. There, Kerry spoke of “war crimes committed in Southeast Asia” by American troops — war crimes that were “not isolated incidents but crimes committed on a day-to-day basis with the full awareness of officers at all levels of command.” He charged that U.S. soldiers had “personally raped, cut off ears, cut off heads, taped wires from portable telephones to human genitals and turned up the power, cut off limbs, blown up bodies, randomly shot at civilians, razed villages in fashion reminiscent of Genghis Khan, shot cattle and dogs for fun, poisoned food stocks, and generally ravaged the countryside of South Vietnam….”

Kerry’s blistering testimony went on and on, filling two hours. The Senate room was packed with reporters and cameras. The testimony scandalized America and its soldiers.

Kerry claimed to speak on behalf of not simply the “small” group called Vietnam Veterans Against the War, of which he was the only representative to testify, but on behalf “of a very much larger group of veterans in this country.” And most damaging, his testimony came amid at least seven pending legislative proposals relating to the war; continued funding hung in the balance. That funding would signal whether the United States tried to win or opted for withdrawal, and whether the boys in the rice paddies got the weapons to defend themselves.

Kerry’s statement hit Vietnam vets like verbal napalm. His analogy to Genghis Khan, widely considered one of history’s worst beasts, was a damning indictment. His words made headlines worldwide. Overnight, his face was everywhere. He was inundated with media requests, an instant celebrity. He was discussed at the highest echelons of the Nixon White House, where the president dismissed him as a “phony.”

And speaking of phony, John Kerry’s testimony would be vigorously disputed from the outset.

One of the most dramatic such confrontations was a heated debate between Kerry and John O’Neill on the Dick Cavett Show on June 30, 1971. O’Neill had taken command of PCF 94, John Kerry’s Swift Boat, after Kerry’s departure. So incensed was O’Neill that over 30 years later he would co-author a bestselling book, Unfit for Command: Swift Boat Veterans Speak Out Against John Kerry, laying out why he and other Swift Boat veterans judged Kerry “a liar and a fraud, unfit to be the commander in chief of the United States of America.” O’Neill and a group of roughly 200 “Swift Boat Veterans for Truth” called a press conference in Washington on May 4, 2004. The group wasted no time with an extraordinary ad campaign that arguably cost John Kerry the presidency. He lost the presidency less in November 2004 than in April 1971.

As to the actual origins of Kerry’s information, that is likewise a controversy. One source disputes Kerry’s claim with a bracing suggestion — namely, that the origins were not American, or Vietnamese, but Russian.

The Kremlin, primarily under Yuri Andropov’s lead at the KGB, had a nasty campaign of disinformation aimed at American servicemen. An eyewitness was Lt. Gen. Ion Mihai Pacepa, who later became the highest-ranking intelligence official to defect from the Soviet bloc. Pacepa spoke to Kerry’s testimony of brutal U.S. “war crimes”:

The exact sources of that assertion should be tracked down. Kerry also ought to be asked who, exactly, told him any such thing, and what it was, exactly, that they said they did in Vietnam. Statutes of limitation now protect these individuals from prosecution for any such admissions. Or did Senator Kerry merely hear allegations of that sort as hearsay bandied about by members of antiwar groups (much of which has since been discredited)?

To me, this assertion sounds exactly like the disinformation line that the Soviets were sowing worldwide throughout the Vietnam era. KGB priority number one at that time was to damage American power, judgment, and credibility. One of its favorite tools was the fabrication of such evidence as photographs and “news reports” about invented American war atrocities. These tales were purveyed in KGB-operated magazines that would then flack them to reputable news organizations. Often enough, they would be picked up. News organizations are notoriously sloppy about verifying their sources. All in all, it was amazingly easy for Soviet-bloc spy organizations to fake many such reports and spread them around the free world.

As a spy chief and a general in the former Soviet satellite of Romania, I produced the very same vitriol Kerry repeated to the U.S. Congress almost word for word and planted it in leftist movements throughout Europe.

Pointing to “peace” organizations that the KGB saturated with dubious anti-American propaganda, Pacepa stated: “The quote from Senator Kerry is unmistakable Soviet-style sloganeering from this period. I believe it is very likely a direct quote from one of these organizations’ propaganda sheets.”

Andropov would proudly tell Pacepa that the KGB’s Vietnam campaign had been “our most significant success.” Thanks to the manipulation of the American peace movement.

One can debate where and when John Kerry got his information. What is undeniable, however, was its value to America’s enemy: the Viet Cong.

In Unfit for Command, John O’Neill recalls the experience of one his band of brothers, Bill Lupetti, a Navy corpsman who had treated injured Swift Boat soldiers. Lupetti was stationed at An Thoi, where both O’Neill and Kerry had served. For Memorial Day 2004, Lupetti returned to Vietnam, painfully visiting Ho Chi Minh City, wandering through the streets earnestly looking to find out whether certain Vietnamese friends had survived the merciless communist takeover enabled by the American withdrawal.

Lupetti happened upon the War Remnants Museum. Inside, he came to an exhibit dedicated to “heroes” who had helped the communists win the war. A wall plaque at the head of the exhibit stated: “We would like to thank the communist parties and working class countries of the world.” This included the “wholehearted support” of various “progressive human beings.”

Among those progressives represented in pictures, Lupetti glimpsed American campus radicals from the 1960s. (In fact, Jane Fonda’s smiling face was captured in a photo in a separate Women’s Museum in Ho Chi Minh City, standing aside Madame Binh.) And there, Lupetti was staggered by the sight of a photo of John Kerry — the Democratic Party’s presidential nominee that year. There he was, John Kerry, in a special exhibit honoring those whose “heroic” contributions had helped the Viet Cong defeat the United States.

The communist Vietnamese never forgot John Kerry’s testimony in 1971. It had been a great help. And perhaps today, in Iran, Kerry’s words are again being heralded, this time by the world’s worst theocratic terror state. Perhaps if the nuclear deal gets resurrected, Kerry’s mug will find a frame on the wall of a “heroes” exhibit somewhere in Tehran one day: Another testimony to him saving America’s adversaries from the Republican in the White House.

Paul Kengor is professor of political science at Grove City College. His books include A Pope and a President: John Paul II, Ronald Reagan, and the Extraordinary Untold Story of the 20thCentury; Dupes: How America’s Adversaries Have Manipulated Progressives for a Century; and The Politically Incorrect Guide to Communism.