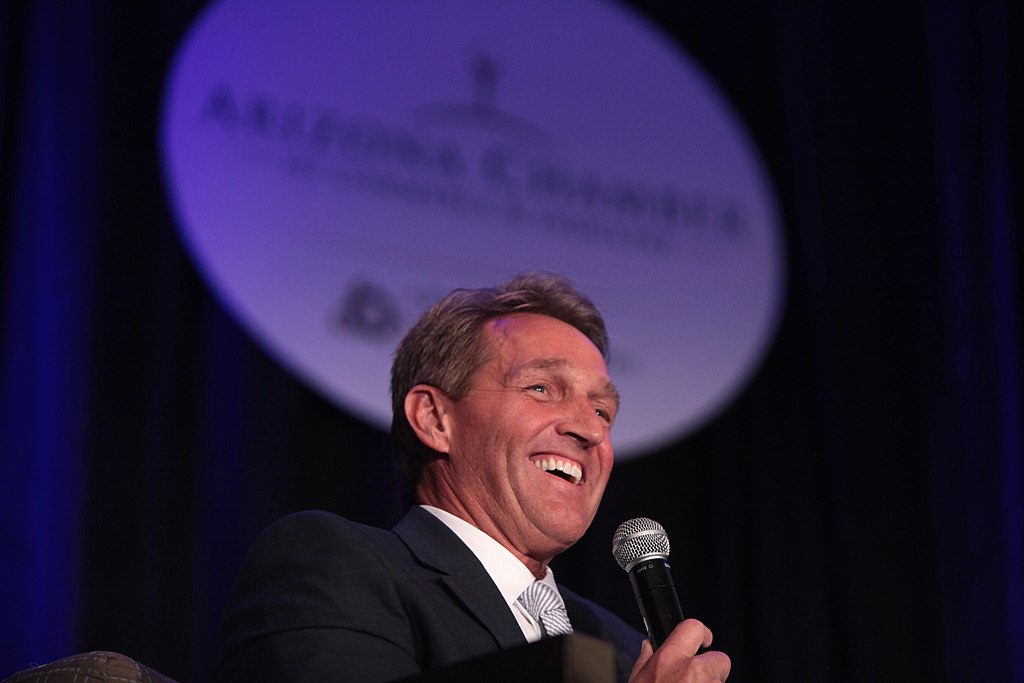 Senator Jeff Flake (R-AZ) is a “great conservative.” Or, at least that’s what Senator Dick Durbin (D-IL) argued on his way out of the Senate Judiciary Committee yesterday. The reason for this bizarre (and inaccurate) praise? Senator Flake opted to turn what should have been a simple “yes” vote in favor of Judge Brett Kavanaugh’s confirmation to the Supreme Court of the United States into a disaster for America’s democracy. In other words, a rousing success for the Democratic Party, handed to the Left by “conservative” Flake.

At present, the Supreme Court is set to resume hearing cases on October 1. Thanks to the antics of Senator Flake, who insisted that Kavanaugh’s confirmation process be complete (by having a final vote on the Senate floor) only after the FBI conducts a weeklong investigation into Judge Kavanaugh’s background, Kavanaugh will not be eligible to preside over the next round of Supreme Court cases. The FBI background investigation will do little to assuage Kavanaugh’s critics. It will only buy them time. With little more than a month before the midterms, time is precisely what the Left (and some #NeverTrump Republicans) need.

Had the Senate Republicans behaved in a competent manner befitting the majority party (there’s a thought), Kavanaugh would have been pushed through the confirmation process in just three days. Instead, the public character assassination of Brett Kavanaugh was allowed to go on for ten days before the final round of hearings for the Senate Judiciary Committee commenced. When those proceedings ended, the Senate Judiciary Committee voted to allow Kavanaugh’s confirmation vote to move to the Senate floor. But, thanks to Flake, there will now be more needless delay.

The only reason that the Democrats have been able to slow this inexorable confirmation process has been due to the public claims of sexual assault by Judge Kavanaugh from a woman purporting to be a former high school friend of Kavanaugh’s, Stanford psychology professor, Dr. Christine Blasey Ford. Understand that Dr. Ford’s claims against Kavanaugh are completely unsubstantiated and would not stand up in a court of law.

Thankfully for the desperate Democrats, the confirmation process is not a legal proceeding (the Left makes similar arguments regarding the similarly unsubstantiated accusations of collusion between the Trump Campaign in 2016 and Russian intelligence). And, thanks to Senator Flake’s poison pill decision today on the Senate Judiciary Committee, the outgoing Arizona “conservative” has given much-needed cover for ill-intentioned Democrats and spineless elected Republicans everywhere.

Mind you, Senator Flake is a captain in the #NeverTrump resistance movement from within the Republican Party and he is leaving the Senate this year. So, this is Flake’s last hurrah. Rather than stamping out Flake’s last attempt at relevance in American politics, the Senate Republicans heeled to his demands. Naturally, the FBI background check is a waste of taxpayer dollars. It will not yield any new findings in substantiating the illicit accusations made against Judge Kavanaugh regarding sexual assault.

Earlier, when Judge Kavanaugh responded to his accusers, he lamented how the shambolic Democratic attempt to stymie his nomination to the Supreme Court will damage America’s revered institutions for at least a generation. I think Kavanaugh was understating his case. Angelo Codevilla and Michael Walsh (as well as several other intellectuals on the Right), have worried that the United States is in the midst of a “cold civil war.” I believe they are correct. What the country is experiencing right now is a war for America’s soul; a fight for the future of the United States itself. This is the Right’s last chance to stop the country from going totally for the democratic socialist line. The Democrats are understandably throwing everything it can at the Right. Unsurprisingly, the Republican Party seems content to take the hits and hope they can get just some of their policies through.

Essentially, Jeff Flake just gave cover to the enemy. Any unnecessary delay — even for a day — is a victory for the Democratic Party, who just need a little bit more time before the midterm elections take place in November. Make no mistake: once the FBI investigation finds nothing new about Kavanaugh next week (he’s had six FBI background investigations over the course of his 25-year legal career), the Democrats will demand another delay.

And, if not Flake, then some other weak Republican, like Senator Lisa Murkowski (R-AS), will embrace the Left’s calls. All to get Trump. All to defeat the Right.

If I were Senator Mitch McConnell (R-KY), I’d have told Senator Flake to retire quietly and quit embarrassing himself. I’d have pushed for the vote within 24 hours of the end Senate Judiciary Committee’s confirmation hearing.

But, that’s just me: someone who likes to win. If the GOP doesn’t get Kavanaugh confirmed, it’s over the for GOP. These are the stakes.