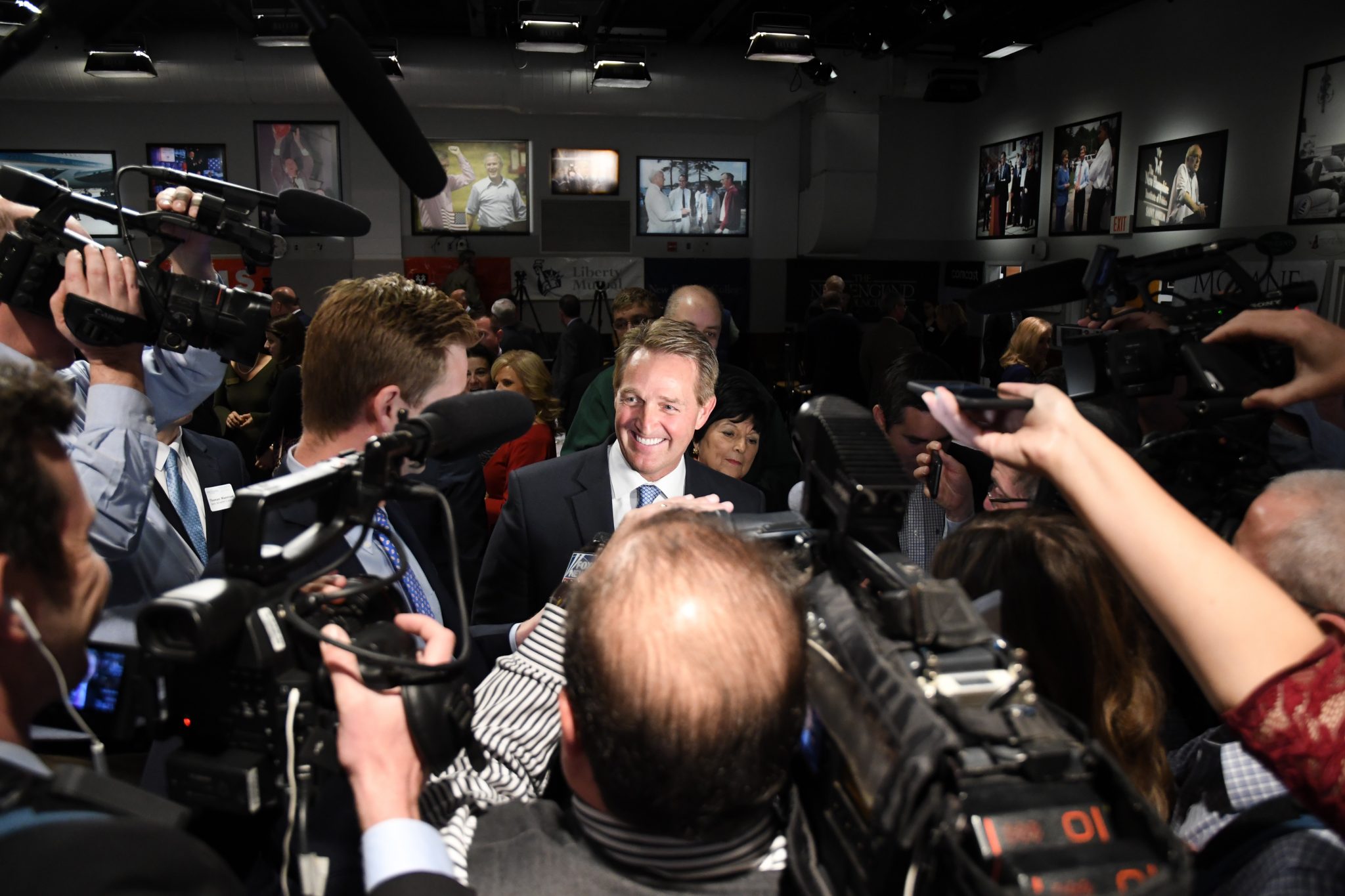 Was ever a politician more aptly and descriptively named than Jeff Flake? This title used to belong to former California Gov. Gray Davis, who was about as gray as one can be and still have a pulse.

But now our Jeff, the former Arizona senator who is about as orthodox a Republican as Clueless Joe Biden is a staunch Catholic, has settled this competition, probably for all time. Jeff, who in the distant past actually supported conservative principles until he “grew in office,” has joined an expanding list of forgotten Republican formers (Republican in registration at least) who’ve gained a bit of screen time by endorsing Joe Biden for president. (Of the United States — can you feature it? Hell, I’d vote for the guy for president of the Downtown Wilmington Kiwanis Club. But 1600?)

The former Arizona senator, who as far as we know is still a registered Republican, though nothing much Republican registers with him anymore, is the same flake who wrote an op-ed for the Washington Post supporting President Trump’s impeachment for asking Ukrainian President Volodymyr Zelensky to look into Biden’s son Hunter, who was paid major bucks to serve on the board of Burisma, an energy company doing business in Ukraine, even though young Hunter knows as much about Ukraine or the energy business as your sheltered Aunt Eunice. Hunter does have a convenient last name, however, as VP Joe Biden at the time was in charge of diplomatic relations with Ukraine. Both Bidens have insisted that there’s nothing wrong with any of this, though any reasonable person can see that there is a great deal wrong with it.

Trump’s actions, Flake claims, were intolerable enough to remove a president from office. And he is now endorsing the man who Trump has claimed pressured Ukraine to halt a corruption investigation of Burisma. Connect those dots if you can.

In England they call them “wets.” These are members of the Conservative Party in Parliament who speak out against conservative policies and conservative officeholders. Prime Minister Margaret Thatcher was much hectored and pestered by these as she pulled Britain back out of the toilet it was fast descending into.

Democrats now are trotting out a list of our wets, mostly long-forgotten former officeholders who were never quite comfortable with an “R” after their names and who’ve come out in favor of the most left-wing Democratic ticket and party in American history. In addition to the Arizona flake, the list includes, but is not limited to, the cringe-inducing John Kasich of Ohio, who never misses an opportunity to put what he considers to be his very superior soul on display. There’s former New York Congresswoman Susan Molinari of New York, less than a conservative hard charger in her three terms in Congress representing Staten Island. Don’t forget, as almost everyone else has, former Republican U.S. Senator from New Hampshire Gordon Humphrey. Gordon’s claims to fame include urging Republicans in August 2016 to replace Donald Trump with a candidate “of sound mind.” He endorsed the above mentioned Saint Kasich for president in 2016 and has been supportive of “whistleblower” Edward Snowden.

Of course no list of convenient (to Democrats) political cross-dressers would be complete without the stately Gen. Colin Powell. The general continues to be described as a Republican in news accounts. But is there anyone with a long enough memory or sufficient time to do the exhaustive (and exhausting) research it would take to identify the last Republican candidate the general voted for? Powell is often trotted out so that Democrats can describe some crackpot policy or off-the-wall candidate as “bipartisan.” The general has taken over this role now that Lowell Weicker has retired from political and public life. (Young readers of The American Spectator may have to look this last guy up. Try under “Watergate Hearings.”)

A personal note on Kasich. I was press secretary to a Central Florida congressman when Kasich was first elected to Congress. He and my guy were friends, and John would pop into the office from time to time. Mostly dealing with an obstreperous press back in the congressional district, I paid little mind to this friendly but unremarkable fellow who was underfoot from time to time. In fact, I thought he had come to fix the office copier, which seemed to always be on the fritz. He might have been more useful to the republic had he chosen this line of work.

As for our Jeff, he was born in 1962 in Snowflake, Arizona, making him one of the Snowflake Flakes. You can’t make this stuff up. Of course he had no control over what his last name is, or where he was born. These quirks he can be absolved of. But his political quirks of recent years are all on him.

The Republican convention got underway last night. So we can say goodbye to the Democrats’ sonorous but vaporous clichés and non sequiturs. And we can say goodbye to this collection of forgettables, who will soon sink back into their well-earned obscurity. (Some, I understand, are answers to questions in the advanced edition of Trivial Pursuit.) My guess is they will have made about the impression on the American public as did their political careers. The voting public and the cosmos will have taken no notice. But you may be sure that whoever the Republican nominee is in 2024, the Democrats will haul out the usual dreary suspects again.