by Ellie Gardey
Police Chief James Craig speaks about the firm stance he is taking against violent protesters in the George Floyd protests in Detroit, Michigan, May 2020: “I will not stand by and let a small minority of criminals come in here, attack our officers, and make our community unsafe.” (WXYZ-TV Detroit/Channel 7/YouTube screenshot)

Detroit’s no-nonsense former police chief James Craig is positioning himself to wage a challenge to Michigan Gov. Gretchen Whitmer in 2022.

Craig is a frequent guest on Fox News and just came out as a conservative on May 10, the day he announced his retirement from the police force. The 65-year-old said that he has identified with the Republican Party for at least a decade and later added that there was no reason for him to reveal his political affiliation while he was serving the public as chief of police.

Anonymous sources close to Craig have told the Detroit News that Craig intends to launch a campaign as a Republican to unseat Whitmer from her governorship, but Craig has not yet announced that he will do so. 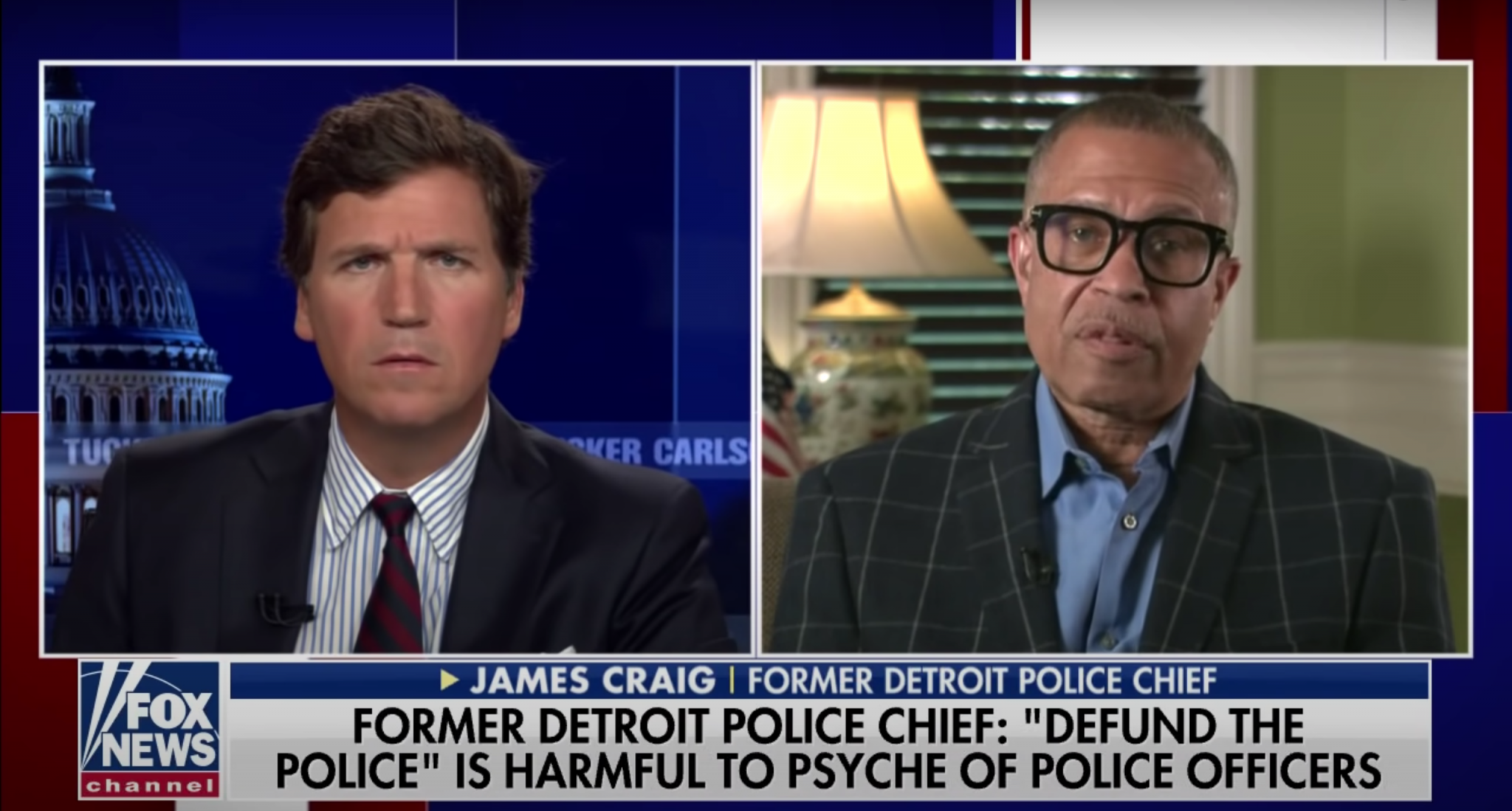 Republican strategists are understandably thrilled with the potential of running Craig, a black Detroiter with deep connections to the city and bipartisan renown.

A huge stumbling block for Republicans looking to ascend to governor of Michigan is the Democratic voting block concentrated in Detroit. Time and time again, would-be Republican politicians have failed to ascend to statewide office in Michigan because they were unable to attract significant support in Detroit.

Of course, running an African American candidate in Michigan does not guarantee that the party will be able to generate significant black support.

The last time Republicans ran an African American candidate in a gubernatorial election — Bill Lucas in 1986 — he lost because the vote margins in Detroit were so lopsided.

And in 2018 and 2020, Republicans ran African American businessman John James for the Senate, but James failed to win a seat both times. The vote margins in Detroit remained entirely lopsided — James only captured 30.2 percent support in Wayne County, where Detroit is located, in 2020.

But strategists think Craig could be different because of his deep connections to Detroit. He was born in the city in 1956 and grew up experiencing the race riots that consumed Detroit in 1967, resulting in 43 deaths and an exodus from the city that still leaves it struggling today.

And Craig retains close relationships to prominent Democrats in Detroit, including Mayor Michael Duggan, who appointed Craig deputy mayor in 2016. Additionally, State Rep. Tenisha Yancy, the Democratic chair of the Detroit caucus, recently told Fox 2 Detroit that she has a “great relationship” with Craig, adding that she has a better relationship with Craig than with Whitmer.

“I know that I can pick up the phone right now and call the chief and he is going to answer,” Yancy said.

During his eight-year stint as chief of police in Detroit, Craig was tough on crime and did not adopt any progressive efforts to transform policing. Instead, he has rebuked progressive policies implemented by other police departments, such as the Chicago Police Department’s announcement that police will not pursue criminals who have committed Class A misdemeanors or lesser offenses.

Craig bolstered his national reputation through his response to the Black Lives Matter protests in the summer of 2020. Craig was one of the few police chiefs of a major city who took a strong stance against rioting, violence, and looting. As a result, Detroit was spared from much of the lawlessness that gripped American cities last summer.

Craig also began to make frequent appearances on Fox News last summer, including on Tucker Carlson Tonight, as an advocate for a hardline response to lawlessness and to denounce the progressive direction many police departments are heading.

There are still questions that remain unanswered about Craig, however. Since he kept his political persuasion out of public knowledge until last month, he has not publicly commented on issues other than ones that directly touch upon policing. That leaves Craig as a political outsider who can craft his policy positions and strategically reveal them throughout the course of his campaign. At the same time, it could also raise doubts about his ability to handle economic issues.

But no leader has experience in every area, and Craig is highly respected in Michigan for his executive acumen and leadership in directing Detroit’s 2,200-strong police force.

Craig alluded that he will run on his demonstrated leadership in an interview with Politico June 4: “I tell you what’s sorely lacking today in many elected seats is the absence of leadership, bold leadership, courageous leadership.”

It’s clear that Craig’s strongest asset in a potential gubernatorial campaign would be his ability to garner support, admiration, and trust from people of many political persuasions.

Defeating Whitmer will be a difficult task. Democrats would be totally embarrassed if Whitmer, the vice-chair of the Democratic National Committee, were to be unseated, so her campaign will have huge amounts of cash. Additionally, an incumbent Michigan governor has not lost reelection since 1990.

Whitmer’s approval rate in the most recent poll, released June 7, stands at 50 percent, but this is actually a drop from her extremely high approval numbers during the pandemic. In a similar poll conducted in February, Whitmer received 58 percent approval, and 38 percent disapproved.

Former Michigan Gov. Rick Snyder was reelected by 4 points in 2014 after his approval rate peaked at 50 percent during his first term. And Whitmer defeated her Republican opponent in 2018 by 9 percentage points.

But Craig’s ability to unite people of all persuasions could mount a strong challenge to Whitmer by lowering her margin of support in Detroit.