by Scott McKay
Outside the Capitol on Jan. 6, 2021 (Tyler Merbler/Wikimedia Commons) 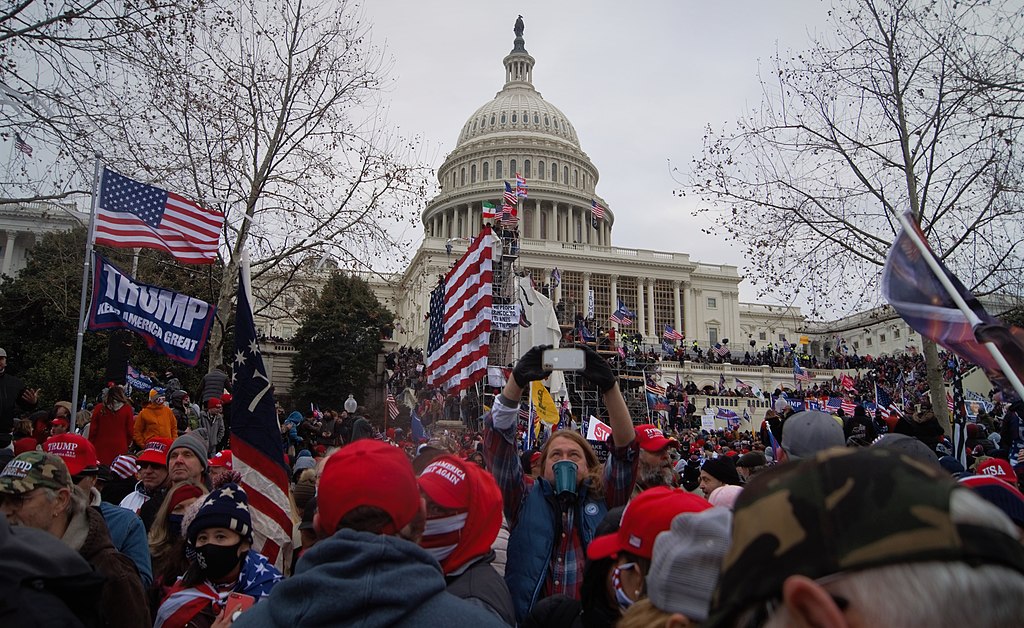 I keep saying it will take strong men and sane women to create the American revival.

Neither are present in the Democrat party. At all. A party strong and sane would have had the discipline not to embark on the dollar-store Spanish Inquisition which is the January 6 Committee.

Or if it had, a strong and sane party would have pulled back from the brink before the public recognized just what a waste of government credibility and tax dollars that committee has obviously devolved into.

For example, late last week Harvard University released a study of the attendees of the “Stop the Steal” rally in Washington, D.C. on January 6, 2021, a mass protest by Trump supporters and others disturbed by the irregularities of the 2020 presidential election. The study wasn’t a representative sample of the “Stop the Steal” protesters. Instead, it was of those who participated in the disturbance inside the Capitol which led to the killing, by a Capitol Police lieutenant, of a protester named Ashli Babbitt. The study reviewed court documents of the 417 people charged with federal crimes arising from the Jan. 6 disturbance.

In other words, these were the people castigated as “insurrectionists” by House Speaker Nancy Pelosi and her Democrat minions, not to mention outcast Republicans Liz Cheney and Adam Kinzinger.

But the numbers in the study indicate an entirely different set of circumstances than the weak men and insane women in charge of our government have promoted to the public.

In the most comprehensive study to date of what motivated the Trump supporters to attack the Capitol, Shorenstein Center researchers found that 20.6 percent of the rioters, a plurality, were motivated to take part in the riot because they supported Trump. Another 20.6 percent of the rioters cited Trump’s fraudulent claims that the 2020 presidential election was rigged as their primary reason for participating in the Jan. 6 riot.…

The third most common reason for attacking the Capitol: a desire to start a civil war or an armed revolution, according to the study. Almost 8 percent of defendants indicated it was their main motivation.

In an interview, Fagan said she was surprised by how frequently support for Trump and concerns about the election were cited as primary motivations for joining the Jan. 6 attack on the Capitol.

So of the most hard-core people involved in the events of Jan. 6, 2021, only eight percent were legitimate “insurrectionists.” Just under half of the rest were either primarily passionate Trump supporters or people who believed the election was conducted by fraudulent means, with others citing a desire to be on hand for an important historical event and an appetite for peaceful protest. Only four percent were Q Anon devotees.

“The documents show that Trump and his allies convinced an unquantifiable number of Americans that representative democracy in the United States was not only in decline, but in imminent, existential danger,” the study said. “This belief translated into a widespread fear of democratic and societal breakdown, which, in turn, motivated hundreds of Americans to travel to DC from far corners of the country in what they were convinced was the nation’s most desperate hour.”

And the response to American citizens rising up to defend what they saw was a constitutional order in crisis, in the aftermath of an election like none conducted in American history, with victory claimed by a man clearly in mental decline and incapable of conducting a real political campaign, the vote-counting in which contained irregularities which to the untrained eye (and perhaps even the trained one) looked for all the world like a banana republic rigged election, was what?

Jailing Americans without bail or trial for more than 18 months now, in many cases. For nonviolent crimes — trespassing, mostly. When leftist protesters have entered the Capitol countless times to disrupt Congress’ activities and have almost always walked away with a ticket and nothing more.

Ringing the Capitol with razor wire fencing and stationing thousands of National Guardsmen as an occupying army.

Convening a kangaroo court with no representation for the opposition party, no cross-examination of witnesses, no impartial trier of fact and no respect for the constitutional procedures.

Prosecuting Trump officials for their refusal to cooperate with the kangaroo court.

The smell is beginning to grow. Jonathan Turley is, for example, no doctrinaire conservative or particular Trump aficionado, but his reaction to the study was damning of the committee…

The study found that a plurality of the 417 federally charged defendants were motivated by the “lies about election fraud and enthusiasm for his re-election.” It concluded that “[t]he documents show that Trump and his allies convinced an unquantifiable number of Americans that representative democracy in the United States was not only in decline, but in imminent, existential danger.”

The study also found that belief in QAnon “was one of the [defendants’] lesser motives.” The study was hardly pro-Trump and one author even expressed surprise with the results since conspiracy theories “were so prominently displayed in much of the [riot’s] visual imagery.”

Once again, none of this exonerates or excuses those who rioted on January 6th or those who fueled the riot. However, the use of “insurrection” by the politicians, pundits, and the press is not an accurate characterization of the motivation of most of the people who went to the Capitol on that day. It was clear that this was a protest that became a riot.

There is no question that there were people who came prepared for such a riot, including some who are extremists who likely would have welcomed a civil war. Yet, the vast majority of people on that day were clearly present to protest the certification and wanted Republicans to join those planning to challenge the election.

One of the key reasons for the resulting damage was the collapse of security at the Hill. The J6 Committee steadfastly refused to address the myriad of questions of why the Congress was not better prepared despite the obvious dangers of a riot (including warnings before January 6th).

The scenes of that day are seared in the memory of many of us. I publicly condemned Trump’s speech while it was being given and I called for a bipartisan vote of censure over his responsibility in the riots. However, there has been an unrelenting effort to make “insurrection” a litmus test for anyone speaking about January 6th. If one does not use that term (and, worse yet, expresses doubts about its accuracy), you run the risk of immediate condemnation as someone excusing or supporting insurrection. This framing also reduces the need to address the question of how this riot was allowed to spiral out of control.

It is possible to express revulsion about what happened on Jan. 6th without claiming that this was an insurrection and attempt to overthrow the nation. This was a collective tragedy for the entire nation, a desecration of our constitutional process. The effort to mandate “insurrection” as the only acceptable description prevents the country from speaking with a unified voice. It clearly serves political purposes but only makes a national resolution more difficult as we approach a new presidential election.

This column isn’t a defense of what happened on Jan. 6, 2021. Just after the riot, I said that it was, essentially, a political trap that Team Trump fell into. Jan. 6 allowed the Democrat party to claim false legitimacy for its irregular election activities, which it later bragged about in a Molly Ball Time magazine article. It corrupted local elections offices in heavily Democrat jurisdictions with Big Tech money, repurposing them into get-out-the-vote centers for the Biden campaign, and it used a network of nonprofits and political operatives to take advantage of COVID-certified opportunities to do illegal ballot harvesting and subverting election integrity.

The official narrative is that even if these things happened they didn’t move enough votes to change the outcome of the election.

Maybe that’s true. Or maybe it’s not. Either way it’s no excuse. The Jan. 6 protesters saw the way the Democrat party “fortified” the election, and they concluded that a stolen election breaks the republic.

Nothing the Biden regime and the Democrats in Congress have done since Jan. 6, 2021 has served to dispel the concerns of the 417 people arrested for entering the Capitol, the hundreds of thousands of men and women who attended the Stop the Steal rally, or the scores of millions of Americans deeply disturbed by the 2020 presidential election.

Team Biden would have been wise to call it a day long before now. But Team Biden is not wise. Team Biden is comprised of weak men and insane women incapable of changing course on Jan. 6 or any other activity they’ve set in motion.

And the wrath of Americans disgusted by the antics of the Jan. 6 committee, and of other things of which this regime is guilty, is coming.

The question is whether the Republicans set to benefit from the reckoning the voters will impose on Biden, Nancy Pelosi, Chuck Schumer, Bennie Thompson, Liz Cheney, and the rest will keep the faith with the voters and insure two things: first, that there are consequences for the violations of constitutional rights this Democrat inquisition has perpetrated, and second, that nothing like this can ever happen again.

You’re free to scoff at their fortitude for such a task, or lack thereof. But the mandate for it, by the time the Jan. 6 committee has finished disgracing itself, will be clear.