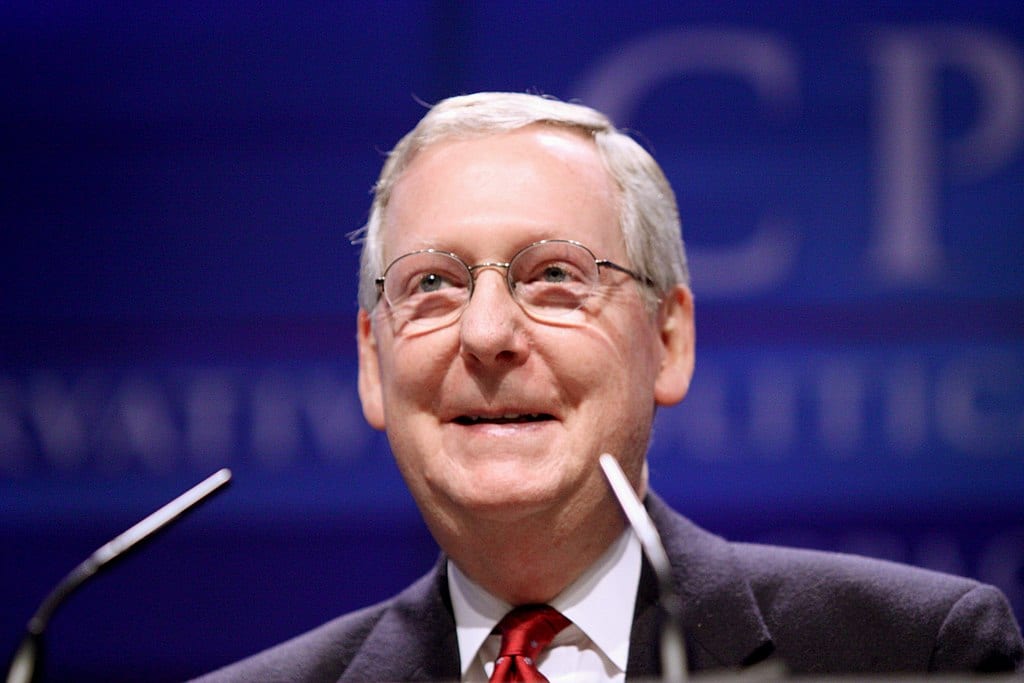 He wants to legalize industrial hemp, a highly versatile derivative of the cannabis plant, and that’s great news for consumers and entrepreneurs. He’s been joined in the fight by his fellow Kentuckian Sen. Rand Paul and top Democratic leaders Sen. Mark Warner and Sen. Tim Kaine, both of Virginia.

They’ve been approached by farmers in their home states who see the economic potential that would come with legalizing the crop. Hemp can produce fibers made useful for rope, textiles, clothing, and more. George Washington once cultivated it.

The problem? Hemp, though it contains little-to-no tetrahydrocannabinol (THC) — the main ingredient in cannabis that has psychoactive effects — is still considered marijuana, a narcotic, under federal law.

Though THC is the most vilified compound, it is only one of 113 cannabinoids found in a typical cannabis plant, most of which do not produce the “high” feeling brought on by THC.

Once such compound is cannabidiol, known as CBD, which is in hemp. It has been found by researchers to alleviate anxiety, stress, addiction, and inflammation in the patients that ingested it. “It would take a hemp joint the size of a telephone pole to get someone high,” said former Texas Congressman and Republican Presidential Candidate Ron Paul. He was right.

A narcotic without being one

The 2014 Farm Bill allowed small-scale research and production of hemp, but the Drug Enforcement Agency and some state health and agricultural agencies have stayed firm on it remaining illegal, particularly CBD. And the courts have thus far agreed.

In a judgment handed down on April 30, the U.S. Court of Appeals, Ninth Circuit ruled against the Hemp Industries Association in their application to the DEA to declassify non-THC cannabis extracts as narcotics. That means the cultivation of hemp remains illegal, whether or not it contains THC.

Predictably, this is not an issue in states that have fully legalized cannabis, such as Colorado and Washington, where consumers are able to purchase products of all kinds that contain both CBD and THC.

That leaves states where cannabis is still illegal in a precarious position. Should they allow hemp production and risk raids by the DEA? Thus far, 17 states have laws that allow hemp with CBD, as long as has only trace elements of THC. But that could rapidly change.

States like Texas are moving to completely outlaw CBD products, even though they have been legal since 2015.

The benefits of CBD to health and to hemp for industrial use is something that has clearly been demonstrated, and top Senate and House Republicans agree. Now it’s up to them to convince their colleagues and President Donald Trump.

In this, Republicans can easily find common ground with Democrats by making the economic case for hemp. They can go back to their constituents this fall and tell them they changed the law to help small businesses. Economic opportunity is coming.

On the same hand, Democrats can tell their constituents they’re opening up legal and safe medicinal use of non-psychoactive cannabis. Thousands of creative entrepreneurs will be able to sell hemp-based products and millions of consumers will benefit. It’s a win-win-win.

Attorney General Jeff Sessions, no fan of cannabis, will likely push President Trump to keep hemp illegal if the bill ever made it to his desk. That’s the real threat in this scenario. The Justice Department, the DEA, and state health and agriculture agencies will need to understand that hemp provides a myriad of benefits that have nothing to do with getting high.

If Republicans can do that, they have laid claim to a real win in this Congress. They’d be smart to open up the market for industrial hemp and CBD and to finally let business people and consumers enjoy the product in the free market.