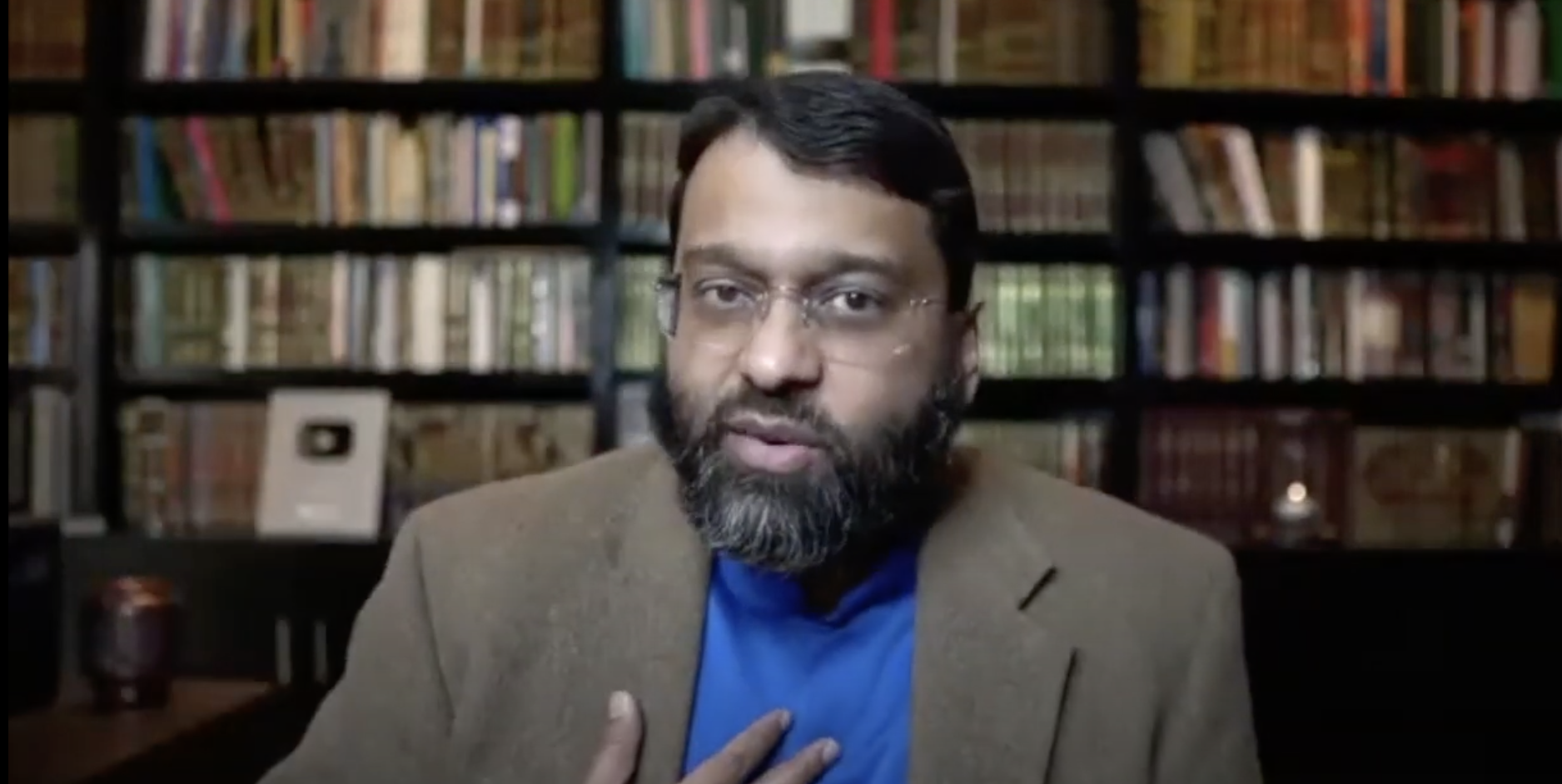 More Politics
Sign Up to receive Our Latest Updates!
Register
Hot Off
The Press
Flynn Files
In This House, We Believe Science Is Real
by Daniel J. Flynn
Hither and Yon
Is the Right Winning on Critical Race Theory?
by Scott McKay
Constitutional Opinions
SCOTUS Rules 9–0 for Catholic Adoption Agency
by Tom Raabe
The Nation’s Pulse
State Sovereignty Still Matters
by Robert Stacy McCain
Euro Watch
Biden Is Wrong: Europeans Should Focus on Europe, Not Asia
by Doug Bandow

The “historical reality” of blasphemy restrictions exists “across all schools of mainstream law, Sunni and Shia,” admitted leading hardline Pakistani-American Islamist cleric Yasir Qadhi during a March 11 webinar, “The Question of Blasphemy in Islam: Between the Sacred and the Profane.” Notwithstanding some politically correct myths, he and his fellow panelists offered some refreshingly critical thinking on the harsh realities surrounding the often deadly issue of blasphemy against Islam while exposing the limits of Qadhi’s self-proclaimed reformism.

Qadhi, dean of academic affairs at the Islamic Seminary of America, candidly noted the existence of authoritatively sanctioned, historical speech restrictions in Muslim societies. This “shouldn’t come as any surprise … in a pre-modern world, in which no society allowed unconditional free speech.” Nonetheless, his culturally relativistic assessment that the “diversity of human cultures” made this “right for them for the time and place” is highly dubious. Tellingly, he condemned French defenses of speech criticizing Islam following the October 16, 2020, Paris beheading of Samuel Paty.

Any contrary, liberal-minded “radical theological revisionism” of an Islamic “utopic past” baffled Qadhi. “I am not sympathetic to grandiose claims of some modern reformers to have miraculously discovered the true intent, and the exclusively correct interpretation of the sacred law, after 14 centuries of misinformation and misinterpretation,” he declared. “Within the enclaves of Western academia,” he added, the “correct interpretations of the ancient Arabic texts just so happened to coincide with notions espoused by Voltaire and Locke and John Stuart Mill.”

The classically trained fatwa author Qadhi was more knowledgeable about traditional Islam than his interlocutor Muqtedar Khan, a University of Delaware political scientist with a “soft spot for Sufism” and muddled ideas about Islamic “reform.” “In the primary sources of Islam, the Quran and the Hadith, there is no way you can conclude that somebody who commits blasphemy should be killed,” he concluded, conveniently ignoring verses like Quran 5:32-33. He cited “profound disagreements and diversity” among Muslims globally as refutation of any consistent standards for defining blasphemy.

While Qadhi noted a historic ijma or consensus among Muslim scholars on prohibiting blasphemy, Khan retorted that “there is no ijma about ijma,” for the group that formed the consensus remains undefined. “You had a medieval conference,” for example, “so what, that doesn’t mean that we have to forever follow that consensus.” Pressing for reform, Khan said that Muslims must “understand the Quran, and live according to it in our time and in our place.”

Nevertheless, both Khan and Qadhi recognized the latter’s observation that the webinar participants “are elitist in our own circles” whose ideas are “not translating to the streets” of popular Muslim culture worldwide. Qadhi noted the “sobering facts” of the 2011 assassination of Pakistan’s Punjab governor Salman Taseer, whose murderer achieved national celebrity by killing a man who questioned Pakistan’s blasphemy law. In response to Qadhi’s earlier references to Islam’s Sunni mainstream, the free-speech advocate Khan quipped that in Pakistan, “your friendly normative Sunni Muslims might come and burn my house down or kill me.”

Yet Qadhi dispassionately stressed that “far more tangible change” among Muslim masses would result from reformers who slowly “work from within the system” of traditional Islamic scholarship. He offered as a glimmer of hope that “many aspects of our classical tradition have been successfully renegotiated by the entirety of the scholarly class,” such as the abandoned jizya poll-tax that oppressed non-Muslims. He would not “copy and paste the past into the present,” as modernity “is so radically different from pre-modern societies” and reveals “fundamental incompatibility of the nation state with certain notions of the sharia.”

By contrast, Fordham University Associate Professor of Modern Islam Sarah Eltantawi, a former communications director for the Islamist Muslim Public Affairs Committee (MPAC), expressed frustration at Qadhi’s methodical incrementalism. She charged it failed to address the urgency of Islamic civilization’s current crisis, as “Muslims are falling behind in every conceivable measure of freedom and democracy and dignity,” ushering in the Muslim “equivalent of the Dark Ages.” Some Muslims even “come to the West, and they want to reproduce the same problems that destroyed those societies that they came from. Enough is enough.”

Eltantawi remarked on the jihadist who murdered Paty on a Paris street after the schoolteacher showed students caricatures of Islam’s prophet Muhammad as part of a free speech lesson. “As a Muslim,” she said, “I find this behavior outrageous.” She continued, “There is no excuse for killing someone in the 21st century for blasphemy” and “we don’t have Islamic empires anymore.”

Although worried about being dismissed as an “irrelevant progressive” (does this include her support, and Khan’s, of boycotting Israel, or her whitewashing of Islamic anti-Semitism?), Eltantawi demanded radical measures. “I don’t really believe that it is scholars tinkering with things that create social change,” she said, but rather Muslim clerics simply “going in the pulpit and preaching something different.” Recent Islamic State faith-based atrocities like sex slavery prompted her to demand, “When does this become an emergency situation that we need to think outside the box?”

Yet to Eltantawi’s horror at widespread Islamist movements, Qadhi responded with stale polemics about Islamic dangers resulting from the Western imperialism of countries like the United States: “Bizarre understanding of Islam” exists “not because of the Quran, it’s not because of our tradition,” but rather from “social political factors, the majority of which emanate from the very lands we happen to live in.” Thus “authoritarian regimes across the Muslim world … propped up by our own country,” are the “cause of religious fanaticism,” he said.

In response, Eltantawi innovatively critiqued the hackneyed “academic orthodoxy for 30 years” that the “only reason we have the rise of Islamist movements is because of the military dictatorships that radicalized the Islamist movements.” She observed “actually a dynamic relationship” of action and reaction, as most Islamists “ultimately want to take over the state,” a subversion that prompts government repression. Meanwhile, on a grassroots level, in Nigeria and Egypt, the places she studies, “most people do not want sharia” and reject Islamism.

Qadhi, who claims to have embraced “post-Salafi” thought, was the cultural laggard in what was otherwise a bracingly realistic panel concerning Islamic authoritarianism, particularly with respect to free speech. While he is right to reject Khan’s ahistorical, free-spirited hermeneutic as too fanciful, Qadhi’s diagnosis of spiritual diseases ailing modern Muslims substitutes anti-Western myths for critical Muslim self-reflection. By comparison, Eltantawi’s acknowledgment that Islamism has no role in modern societies marks a significant advance over the all-too-typical apologias for radicalism that tarnish contemporary Middle East studies. One still awaits a similar rethinking of their hostility to Israel.

Andrew E. Harrod is a Campus Watch Fellow, freelance researcher, and writer who holds a Ph.D. from the Fletcher School of Law and Diplomacy at Tufts University and a J.D. from George Washington University Law School. He is a fellow with the Lawfare Project. Follow him on Twitter at @AEHarrod.