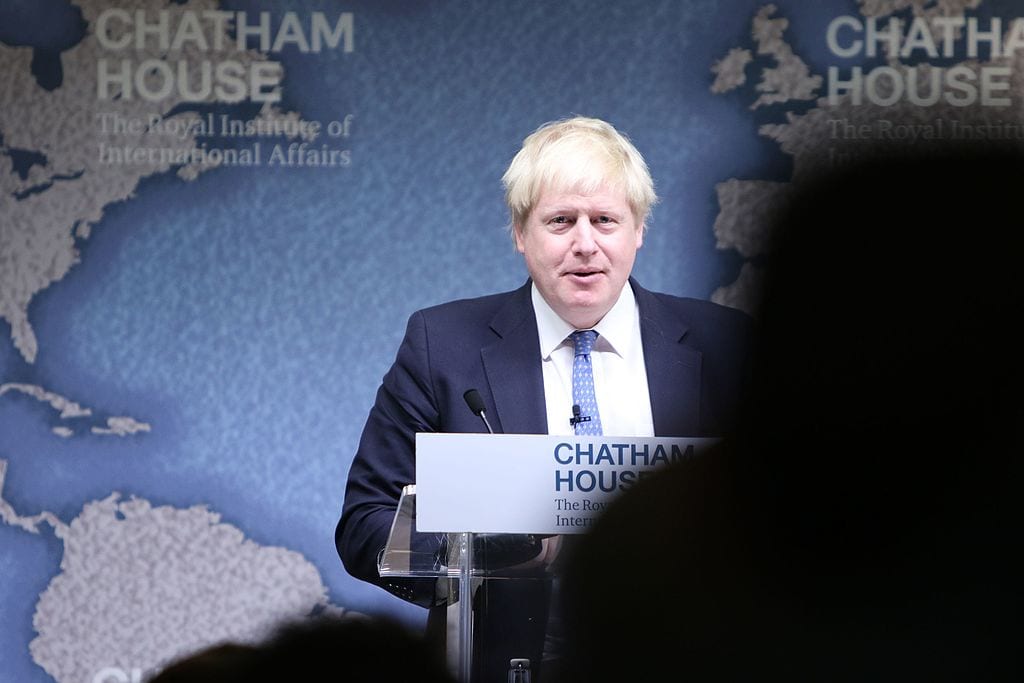 A British politician who lived by his pen, enjoyed a chequered reputation attracting supporters and detractors, warned of an existential threat to his nation, while boasting American antecedents? Many will answer “Winston Churchill.” Full marks, though, for taking a contemporary turn and replying “Boris Johnson.”

Churchill’s dogged leadership during World War II and foresight in its aftermath, when, at Fulton, Missouri, he warned of the Soviet “iron curtain” descending over Eastern Europe, won him heroic status in America — not to mention the rare privilege of becoming an honorary U.S. citizen. His mother was Brooklyn heiress Jennie Jerome (Mr. Johnson, meanwhile, was born in New York City).

Movie audiences of Darkest Hour glimpsed Churchill’s early days as Prime Minister, as he struggled to rescue an army surrounded at Dunkirk and to convince fellow Conservatives and a hostile Commons to fight against German aggression instead of submitting to German terms. Britons would “fight on the beaches… never surrender,” and hold out for, “in one word, victory.”

Britain’s battle today is bureaucratic, but no less existential. There can be no comparison with the Nazis, but Britain contends against a European Union formed initially for the mutual benefits of trade and prosperity. Instead, Eurocrats pursued Continental centralization, ever-closer union, diminution of the nation-state, and the accumulation of regulatory power.

As the EU expanded its remit, Britain faced a return to the sclerotic 1970s and the “winter of discontent.” Leviathan had to be stopped. “We have not successfully rolled back the frontiers of the state in Britain,” Margaret Thatcher said at Bruges in 1988, “only to see them re-imposed at a European level with a European super-state exercising a new dominance from Brussels.”

As the London Telegraph’s correspondent covering the EU beat in the early 1990s, Mr. Johnson had a front row seat. His wires back to London were a catalogue of the political sins of Europe’s new ruling class, just beginning to feel their oats.

The Brexit referendum was long-suffering Britain’s reply, with a majority voting in June 2016 to exit the EU and reclaim freedom. It was, as Mr. Johnson said, their “Independence Day.” Which turned out to be the high water mark of optimism. Theresa May’s supplicating ministry has compromised the Brexit promise.

“If MPs vote for this deal, we are bowing our neck to the yoke,” warns Mr. Johnson. Not disheartened, he sets out how to salvage Brexit. Not all of Ireland’s DFA is rubbish, whose good parts should be used as a basis for a renegotiation strategy. The Irish question is a tempest-in-a-teapot, blown out of all proportion by mischievous mandarins, and must be binned. As must the idea of giving away £39 billion for nothing; offer Brussels half now, the remainder to be paid upon signing a trade agreement.

Mr. Johnson exhorts Britons to shake off despondency — a requisite skill in any leader to rouse a people to greatness. “We should insist that our government finally gets behind Brexit and shows some basic confidence and enthusiasm and belief in this great project,” he writes.

This great project to secure, once more, fundamental rights and liberties. Many keystones of Western civilization are aligned with this British identity: rule of law, free trade, democratic institutions, and a rich cultural heritage.

Yet all these are at stake, insidiously or fundamentally, by the Government’s about-turn on its pledge that “Brexit means Brexit,” by surrendering its trade rules to EU jurisdiction, and abrogating the will of the British people in 2016 to abandon the diktat of Brussels bureaucrats.

As Britons prepared in 1940 for a war of unknown duration and doubtful success, Churchill inspired hope amidst dire prospects. “Victory” was their goal, he told the Commons, “however long and hard the road may be, for without victory there is no survival.”

In our time, Boris Johnson encourages Britons tired of EU subjugation and dispirited by innumerable setbacks hobbling the Brexit cause. Be of good cheer, he signals; we face our exit travails as “a challenge to be overcome, not as an inevitable disaster.” Is BoJo the leader for Brexit’s darkest hour?