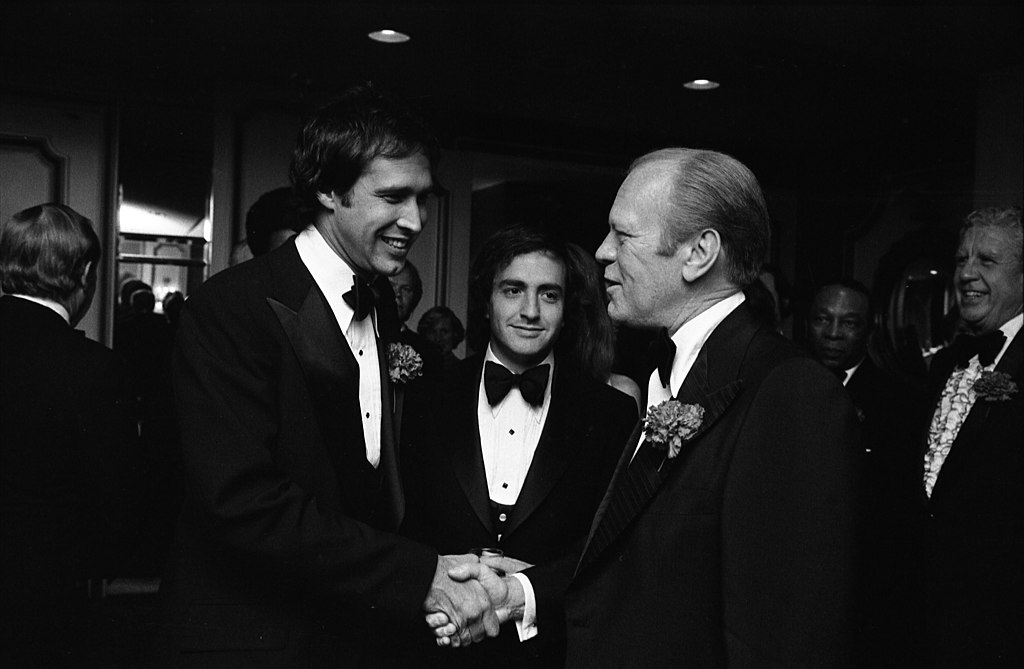 I’m creating a new television series called The Woke Zone. Every episode will be based on a cultural true story that could never happen in a sensible country and, if it ever did, would be the subject of relentless mockery by our comedy mini-stars. These depict incidents so ridiculous that comic purists like Johnny Carson, Conan O’Brien, and a pre-woke Jay Leno would have had a field night with them, but which get totally ignored by their cringeworthy successors: Colbert, Kimmel, Fallon, et al.

Once upon a time, Chevy Chase became a superstar on Saturday Night Live, most memorably by doing pratfalls imitating President Gerald Ford, a former college athlete who had a couple of awkward tumbles before the 1976 election. Chase admitted much later that his intention was as much political as comical. “Obviously my leanings were Democratic, and I wanted [Jimmy] Carter in and I wanted Ford out,” Chase told CNN. “And I figured look, we’re reaching millions of people every weekend, why not do it.”

Yet when a ludicrously masked Joe Biden trips three times while boarding Air Force One last March, then executes an undignified salute by the plane door, not a single comedian exploits it. They don’t want to diminish our real-life President Clouseau. The Chase exception is now the Hollywoke rule, hence a perfect opportunity for a program like The Woke Zone.

I envision a half-hour dramedy (a nonexistent inside Hollywoke buzzword) in the style of Rod Serling’s The Twilight Zone, only factually inspired. A suave, dashing auteur host — say, me — will stentoriously introduce each episode, which fine actors and directors would interpret. The hook is every plot must be inspired by a recent act of leftist lunacy. And fortunately for the show, if unfortunately for American society, there’s no dearth of material to develop. Last week alone proved a treasure trove.

It’s standard practice in the television industry to pitch a show via a series “bible,” containing loglines and elements of potential stories. Here are mine for the first five episodes of The Woke Zone:

Logline: A university professor shows his Shakespeare class the acclaimed 1964 film version of Othello starring the greatest actor of the 20th century, Laurence Olivier, only to be fired because Olivier played the part in blackface to emulate the title Moor.

Concluding Narration: Professor Jones thought he would educate his students on the genius of William Shakespeare’s Othello. Instead, it was he who learned his lesson from the Bard, albeit another play, A Midsummer Night’s Dream. “What fools these mortals be”— especially in the Woke Zone.

Logline: Depressed by the emasculation of his favorite heroes, a boy seeks comfort in the original Superman comic books, only to discover that the son of Clark Kent and Lois Lane is the bisexual new Superman and, worse, a climate change activist.

Concluding Narration: And so they all changed — Timmy’s heroes — from masculine champions to confused wimps. He thought Superman would be invulnerable to this strange sickness — then he kissed a boy instead of a cute girl, turning Timmy’s refuge, his Fortress of Solitude, into Bizarro World — another name for the Woke Zone.

Concluding Narration: Bob Carter believed he could control his depravity by glimpsing sensuous women in an iconic, semi-respectable magazine. But its latest cover told him what the publishers knew him to be — a self-deceived pervert, and permanent denizen of the Woke Zone.

Logline: A biracial sportscaster gets suspended from her ESPN job for questioning why biracial former president Obama only identifies as uni-racial — black.

Concluding Narration: For years, Jenny Carter defied ideological gravity at her uber-liberal sports network by virtue of being a half-black woman. Until her reasonable observation about an equally biracial former president identifying as uni-racial canceled her double-minority pass, expelling her into the Woke Zone.

Logline: The CEO of a major airline who imposed a staff vaccine mandate suffers a mass employee shortage that forces almost 2,000 flight cancellations, then blames it on the weather.

Concluding Narration: Frank Jenkins knew most of his pilots were ex-military men, yet still thought he could make them comply with an illogical, invasive order. He found out too late those men were more than a match not only for him, but for the senile, demented president of the Woke Zone.