When the Bureau of Labor Statistics reported that inflation had risen at an annual rate of 8.3 percent in April, the White House and many news outlets made much of the minuscule decrease from the 8.5 percent rate reported for March. President Biden issued a statement, for example, that called the infinitesimal decline “heartening.” CNN ran a story titled, “US inflation slowed last month for the first time since August.” This wasn’t terribly comforting, however, considering that the inflation rate has nearly doubled since last April while real wages declined by 2.6 percent.

Nor is it “heartening” to see that Biden is still in denial about the role his administration’s spending has played in igniting inflation. Here’s a typically delusional claim he made last week in response to a reporter’s question concerning how much responsibility he accepts for the inflation spike: “I think our policies help, not hurt.… Economists think that this is going to be a real tough problem to solve, but it’s not because of spending.” That claim conflicts with the opinions of most economists, including progressives like Obama economic advisor Steven Rattner, who wrote the following in the New York Times during November of 2021:

The original sin was the $1.9 trillion American Rescue Plan, passed in March. The bill — almost completely unfunded — sought to counter the effects of the Covid pandemic by focusing on demand-side stimulus rather than on investment. That has contributed materially to today’s inflation levels.… So the administration should come clean with voters about the impact of its spending plans on inflation.

Biden’s preposterous response to April’s inflation figures suggests that he is unlikely to do that. He still insists, for example, that high inflation in our country is symptomatic of a global trend. However, as my American Spectator colleague Daniel J. Flynn recently pointed out, this is fiction. A rational president would have stopped peddling this whopper months ago, when the Federal Reserve compared the core inflation rate in the U.S. to the rates experienced in other OECD nations and concluded, “The United States is experiencing higher rates of inflation than other advanced economies.” The chart below tells you all you need to know: 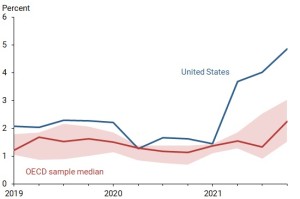 As out of touch as Biden is about the causes of inflation, his plan to fix the problem is even more delusional. Predictably, one of its major features involves tax increases. Biden takes credit for last year’s modest decrease in the federal deficit, and maintains that making corporations and the wealthy “pay their fair share” will reduce it further. But the Wall Street Journal reveals the dirty little secret about that reduction — it happened because Americans are already paying more in taxes: “Federal receipts through April rose an astonishing $843 billion from a year earlier, or 39% … Individual income taxes rose $698 billion, or 68%.”

A large part of that spike in individual income taxes is the result of illusory wage increases caused by inflation. Nominal wages have indeed increased but, as noted above, real wages have declined. Consequently, millions of individuals have incurred higher tax liabilities during the past year because their nominal incomes have gone up enough to trigger “bracket creep.” The IRS couldn’t care less if the buying power of your paycheck is lower than it was last year before you got your fake salary increase. If your “higher” salary pushed you into a more extortionate tax bracket, tough. But hey, the deficit might decrease a little. Feel better now? No?

What about Biden’s plan to lower gas prices? It’s obvious that he has no plan to ameliorate America’s pain at the pump — and the public knows it. A recent Rasmussen poll found that most voters (76 percent of Republicans, 54 percent of Independents, and 24 percent of Democrats) blame Biden for high gas prices. Yet, last week he was still insinuating that the problem is oil company price-gouging: “The fact is the average cost of a barrel of oil has been steady for weeks. So why do gas prices keep going up so high?” This question betrays Biden’s reality-challenged notion of how the oil market works. As another Federal Reserve report explains:

In other words, Big Oil doesn’t set the amount Americans pay at the pump. The prices you are paying for gasoline today are the result of blunders Biden committed in early 2021. He declared war on fossil fuels on his first day in office. By killing the Keystone XL pipeline and restricting access to oil and gas sources like ANWR, he incentivized energy producers to be very cautious about new investments in exploration and production. As recently as last week, his administration canceled the sale of oil and gas leases in Alaska and the Gulf of Mexico, thus signaling producers that they are still operating in a hostile political environment.

Biden says inflation is now his “top priority.” That’s exactly what Jimmy Carter said the last time skyrocketing prices endangered the economy. As the New York Times reported on April 11, 1978: “President Carter’s speech today elevated the fight on inflation to top priority on his list of economic problems.” At that time, the rate stood at 6.6 percent. When the voters fired Carter in November of 1980, it had risen to 12.6 percent. Biden can’t be voted out yet, so the only way to control his delusional economic policies is to fire his congressional enablers in November. He can’t spend the country into bankruptcy if the loyal opposition controls Congress.