Under God Bible,Freedom,Freedom of Religion,Liberty,Reagan The Divine Importance of Preserving Freedom - The American Spectator | USA News and Politics
Menu
Under God
The Divine Importance of Preserving Freedom
Reagan understood it well, and so should we this Independence Day weekend.
by Shmuel Klatzkin
Ronald Reagan in the White House, 1986 (mark reinstein/Shutterstock) 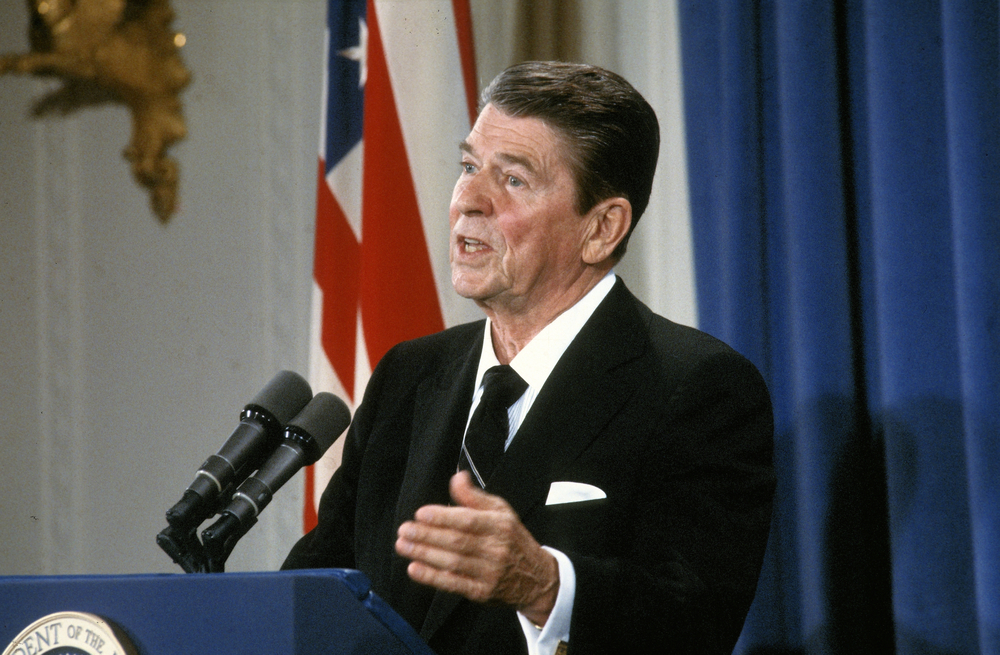 In one of his most moving speeches, President Ronald Reagan declared: “Freedom is never more than one generation from extinction. We didn’t pass it to our children in the bloodstream. It must be fought for, protected and handed on for them to do the same, or one day we will spend our sunset years telling our children and our children’s children what it was once like in the United States where men were free.”

One might think that if the basics that underlie our freedom are self-evident and unalienable, then everyone agrees with political freedom and it can never be taken away.

In a certain sense, that is true. Natan Sharansky related how, when he was taunted by his KGB jailers that his imprisonment gave the lie to his belief in the triumph of freedom, Sharansky declared that he was freer than they were. They laughed at him, but Sharansky had proof that stopped them in their tracks. He began to loudly deride and mock the current Soviet leader, then said to his captors, “You see, I can say that and you can’t!”

As president of the most powerful nation on Earth, Reagan was saying something different. He was saying that it is up to us make sure freedom-lovers are not jailed. Sharansky spoke the truth, but in his case, the only freedom that remains is that of a political prisoner winning a verbal battle with people who remain his captors. Reagan’s point was rather that in order to live in a world in which everyone is able to enjoy freedom as the self-evidently best way to live, and in order for human rights to remain unalienable, we need to be willing to fight for it the way that Sharansky did.

We like to think of our world as stable and secure. Our civilization has achieved stunning triumphs. It has accumulated and widely distributed wealth to a degree that few ever imagined possible. It has established civil rights and political freedoms that would be the envy of almost anyone at almost any time in our long history. How shattering to think that such achievements could be evanescent.

But words of the Jewish liturgy, dating back well more than a millennium at the least, express another and deeper take on the reality of our world. That liturgy praises God as “the One who renews each day continuously the work of creation.” Not only are the peak civilizational achievements of humankind in need of constant rededication, but the very nature of Nature itself is compared to the world of a computer screen — the moment the plug is pulled, the whole world the screen had been showing vanishes into nothing.

That view of the world accurately reflects some of the deepest insights of the biblical tradition. Genesis speaks of a primordial world like an all-encompassing sea, ever in flux, with no solidity. It was a world of tohu vavohu, a chaos rather than a world. The world was fashioned, Isaiah later reminded us, to be settled; it was not meant to be returned to chaos.

That was a prophetic teaching, a message directed to the people, who have an indispensable role in seeing that this will be so. We have a job of continuously engaging with the creation in which we have been placed and for which we have been given responsibility. We become aware of the precariousness of a world “suspended on nothing,” as the ancient liturgist put it, in which we have a role in infusing stability and structure.

Yet the great despots of history constantly justify their claim to power by saying that their tyranny is exactly what is necessary to keep chaos at bay. Stalin endlessly insisted that his empire of terror was necessary to establish the orderly and eternal workers’ paradise. Hitler justified his terror as what was necessary to halt the forces that had so chaotically disrupted the natural order that invincible Germany had been defeated in World War I.

The mere imposition of order is not enough to bring about a good and stable world. Some expressions of order are even more destructive than mere chaos: “Mr. Gorbachev, tear down this wall!”

Reagan had a significant exchange of letters with Rabbi Menachem M. Schneerson, the great Jewish leader and naturalized American citizen known often simply as the Rebbe, the anniversary of whose passing is marked this weekend. The Rebbe spoke of the necessity of chaos as making creativity possible, for were it not what the world emerges from, the freedom to act meaningfully would be non-existent, a mere illusion.

Yet the emotional passion that lies behind creativity (for emotions are what move us beyond contemplation to action) easily becomes dismissive of every other reality. Artists and creative people are more subject than most to an imperiousness that flows from their own grasp of the power that is truly in our hands to create.

What is needed then is a fusion, an integration of passionate creativity with a humble sense of orderliness that balances the imperious excesses of the creative character and assures that our human creation will be harmonious with the universal and transcendent purpose that has put the power to act in our hands.

We are at a particularly chaotic period in our American politics and in the politics of the world. Our time offers a further illustration of Yeats’ words: “The worst are full of passionate intensity.” Political creativity is seen by far too many as an exercise in uncontrolled emotion. With that all-consuming passion, such things as reasoned discussion, constitutional traditions, and civility are useless burdens. History, tradition, civilizational norms of every sort, language — all are heated up until they dissolve into plasma. Human beings who dare to object or criticize are subject to the same treatment.

Yet the answer to mindless, chaotic passion is not simply a deadening, obtuse order. The answer is showing that order and creativity can and must be melded together. Our lives and our communities must be living examples of freedom that is responsible and aware of history and of others. A freedom that takes upon itself the responsibility to continuously renew itself in a way ever faithful to the constant and eternal character of the good.

It was the genius of the American Founding Fathers to realize that politics and government is not the proper instrument for forging this deep internal integration. Politics is a practical exercise of power that thrives on reducing issues to the form that they will gain powerful backing. Political power is a blunt instrument, singularly unsuited to mix up with the deepest of levels of consciousness. (READ MORE: How Conservatives Transcend Ideology)

And so the first and chief of the amendments of the Bill of Rights secures the freedom of religion, even as it secures the freedom to speak and write. Before we come to politics, this is something we have to get straight. We have to realize that only order will choke all creativity and thought while only chaos will destroy any possibility of a world that is sustainably inhabitable.

A constant renewal of an ever-fresh creation that we mold anew each day to reflect the stable unity that enables all things to cohere into a reality about which its Maker affirms that “It is good” — this is the mindset behind Genesis. And what characterizes the Bible’s beginning characterizes its ongoing teachings.

You who read this are most likely one of those who, by temperament or by exposure to the right teachers, understand the value of conserving the great civilizational accomplishments manifest in our Constitution and the free society it has nurtured and guided. We have the responsibility to show by example how our commitments are not frozen into irrelevance. The only way we can do that is through embracing the engagement with the ever-present source that enables creativity — the underlying tohu that makes our works of conservation necessary, meaningful, and alive.

This is what was behind that persuasively sincere optimism of Reagan’s “Morning in America” outlook. In its protean religious form, that was what was behind the positivity bias and creative passion of the Rebbe. It is rooted in our deepest words and teachings about the nature of the world and our place in it. Because of this unitary and uniting vision, it has survived the centuries.

This long weekend includes both a day of reflection on the Rebbe’s life and a day of celebration of America’s independence. It is a great time to contemplate, to feel, and to act upon this positive message. Embrace the act of reaching into the chaos of creativity to build a stable and orderly life that is free, beneficent, and inspiring. Freedom demands nothing less.