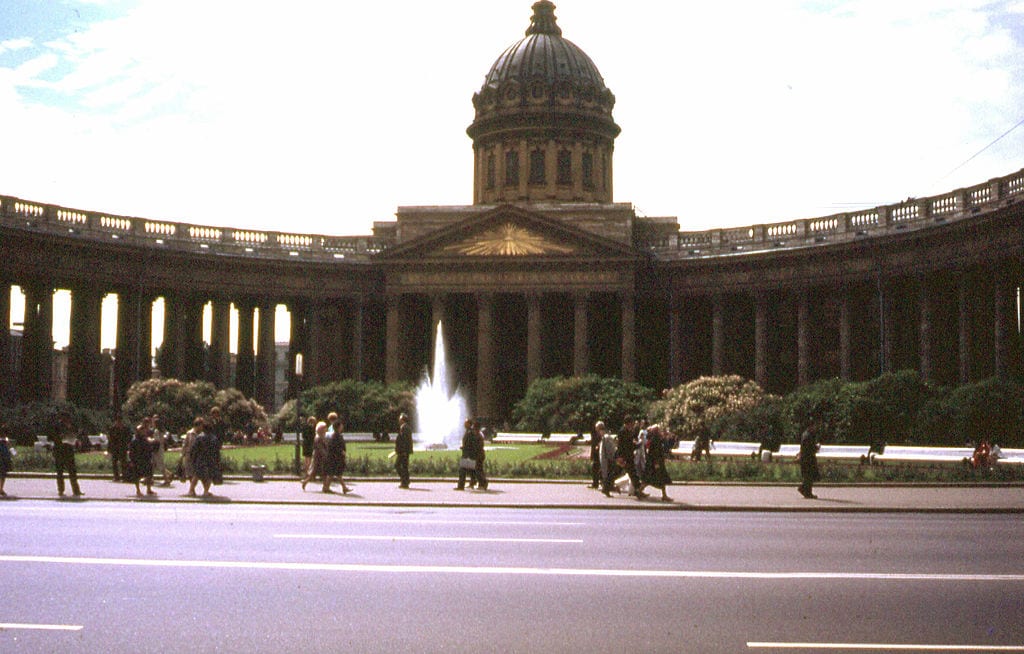 In 1972, Charles Cole was a 20-something American embarking on an ideological odyssey: a tour of duty through the USSR as a Russian-speaking guide for a cultural-exchange exhibit sponsored by the U.S. Information Agency. Trained at the Defense Language Institute in Monterey, Cole jumped at the chance to serve his nation abroad with his skills. These exhibits were powerful in educating Soviet citizens about the freedoms in America that their totalitarian government lied about unceasingly. As for the U.S. government’s investment in this program, William F. Buckley Jr. wrote that he couldn’t imagine a “better-leveraged” use of tax dollars.

Now in his 70s, and alarmed by the perverse sympathies toward communism and socialism he’s seeing in our new America, especially among Millennials, Cole in 2017 marked the centenary of communism by writing a memoir of his six surreal months in the USSR, in hopes of not only preserving that history but begging Americans to pay heed to the lessons of the failed communist experiment. He hopes to offer truth as an antidote to “mind-numbing propaganda,” then and still today.

Cole’s account is titled In Russian Wonderland, an engaging journey through unique remembrances of everything from Russia’s laughable but scary “Aeroflot” airlines, to the Russian people’s shocking abuse of “oceans of vodka,” to the omnipresence of state surveillance, to the grim behavior of Soviet workers from waitresses and waiters to hotel maids, to the diabolical annihilation of religion — from what the Kremlin called its approved “working churches” to the desecration and conversion of great holy places like Leningrad’s Kazan Cathedral into the Museum of the History of Religion and Atheism.

On and on it went, this strange life in the worker’s paradise. Truly, it was a Wonderland, at times more bizarre than the oddest scenes from Lewis Carroll’s classic. Indeed, Alice might have found herself less confused in her weird Wonderland than this baffling Bolshevik rendition drawn up in Russian.

Among Cole’s many telling anecdotes, here are a few that beg our attention and remembrance:

At one exhibit in Kazan, which, as usual, was monitored by heckling KGB hacks pretending to be passersby, an elderly gentleman discreetly brought Charles a bag of freshly picked apples. He asked Charles to accept it as a gift from an old Russian who admired the United States. Before walking away, he winked at Charles and whispered, “The sweetest of these apples are toward the bottom of the bag.”

Charles later retrieved from the bottom a piece of paper folded into a tiny cube. He opened it to find this note from the old timer: “We have a totalitarian regime. If we had a democratic republic, we would have progressed further and achieved more. Nowadays the psychiatric hospitals are filled with dissidents. All the positive comments in your comments book are immediately torn out by the KGB. You should take pride in having such a democratic country and not be overly tolerant in the face of those who have been blinded and deceived by propaganda.”

The KGB plants were stationed at every exhibit — watching, staring, brooding. As soon as the American representative would strike up a conversation with curious Russians, the plants would start up with their canned litany of harassing questions, badgering the American about his country being rife with racism, sexism, unemployment, homelessness, excoriating U.S. foreign policy, especially in Vietnam, and on and on (what we’d call liberal talking points). “But you discriminate against black people.” “Why is your government killing babies in Vietnam?”

In one case, something tragic ensued that remains seared in Charles’ memory: During most Q&A sessions at the exhibits, everyday Russians quickly clamped up when the KGB plants started their antics and barrage of mendacity. They didn’t want trouble. One day in Leningrad, however, a young man couldn’t contain his rage at the masquerade of lies dished by the government propagandist. He responded, and then the plant responded, and back and forth it went. Fact vs. falsehood, fact vs. falsehood. The young man would not back down. The crowd watched nervously. The young man’s wife pleaded with him to stop, tugging at his coat to leave. She knew the danger, but the young man couldn’t help himself. This was too unjust. In short order, says Cole, a group of “dour-looking guys in black leather jackets” suddenly materialized, as did a black van at the rear door. A goon in the van got out, signaled to the thugs, and they seized the young man, speeding away.

Charles many times has wondered what happened to that poor kid — hauled off by scoundrels serving their police state.

And if that image doesn’t shake you, picture this scenario reported by Charles when finally departing commie wonderland as his train approached Finland: The locomotive came to an unexpected full stop on an elevated trestle. From the window, Charles and friends glimpsed a powerful searchlight from somewhere below the railroad bridge. It turned out that this was standard procedure for Soviet border guards. They fixed their beaming lights under the train cars to see if any desperate soul had somehow clung himself to the bottom of the locomotive to escape utopia. Wow.

And yet, amid all these frightening scenes, maybe the most unsettling of Cole’s recollections is an anecdote so painful because it applies less to Bolshevik Russia than to higher education in America.

During a stopover in Moscow, Charles and his fellow guides went to dinner at the Hotel Ukraina. While waiting to be seated, they were approached by four black men who asked if they were Americans. The group decided to have dinner together. These English-speaking black men were from Africa. Charles innocently asked if their country sent a lot of exchange students to Moscow. “Oh, yes,” replied one, “we send all of them here to the Soviet Union.” He explained why: “We used to send quite a few of our students to Princeton, Columbia, and Berkeley, but they all came back Marxists. Now we send them here, and after three or four years in the USSR, they all return dedicated anti-communists.”

It’s a lesson that American parents still haven’t learned. They send their kids to Princeton, Columbia, Berkeley, and other universities, and they come back as radical leftists, and, yes, some of them flat-out Marxists.

And that’s really the enduring historical tragedy of Charles Cole’s account. We won the battle against communism and socialism abroad, but we continue to lose it in the classroom at home.

Here in America, the tenured radicals thrive on their campus commie wonderlands. In some cases, the bias is blatant, such as the year-long birthday bash for Karl Marx celebrated at Carnegie Mellon University throughout 2018, the bicentennial of “the great man,” as CMU’s dean of the Dietrich School describes old Uncle Karl. But for most of today’s university front, the collectivist gruel spoon-fed to the kiddies is more carefully served: noxious cultural-Marxist rotgut made more palatable by silly labels like “Critical Theory” and “intersectionality.” A case in point is the alma mater of our President of Fundamental Transformation, one Barack Obama, whose intrepid Occidental College touts a Department of Critical Theory and Social Justice, which unashamedly bills itself a center of “Marxism, psychoanalysis, the Frankfurt School, deconstruction, critical race studies, queer theory, feminist theory, postcolonial theory, and intersectionality.”

What’s going on at Occidental for a staggering $67,806 per student annually — or at Carnegie Mellon for an unconscionable $70,579 — has been standard fare for decades at “elite” colleges. And amid this commie wonderland, perhaps the greatest wonder are the oblivious parents marching their children and lifesavings into these indoctrination mills at enormous expense both financial and moral. Our academic asylums are ruining us, and parents pay for the ruination. Mom and dad blithely grease the ideological skids; they’re the dupes exploited as supple prey by the academic left.

All of it makes one almost prefer the Russian Wonderland, where at least the inhabitants of the ideological asylum that Charles Cole encountered in the 1970s knew they were being scammed.