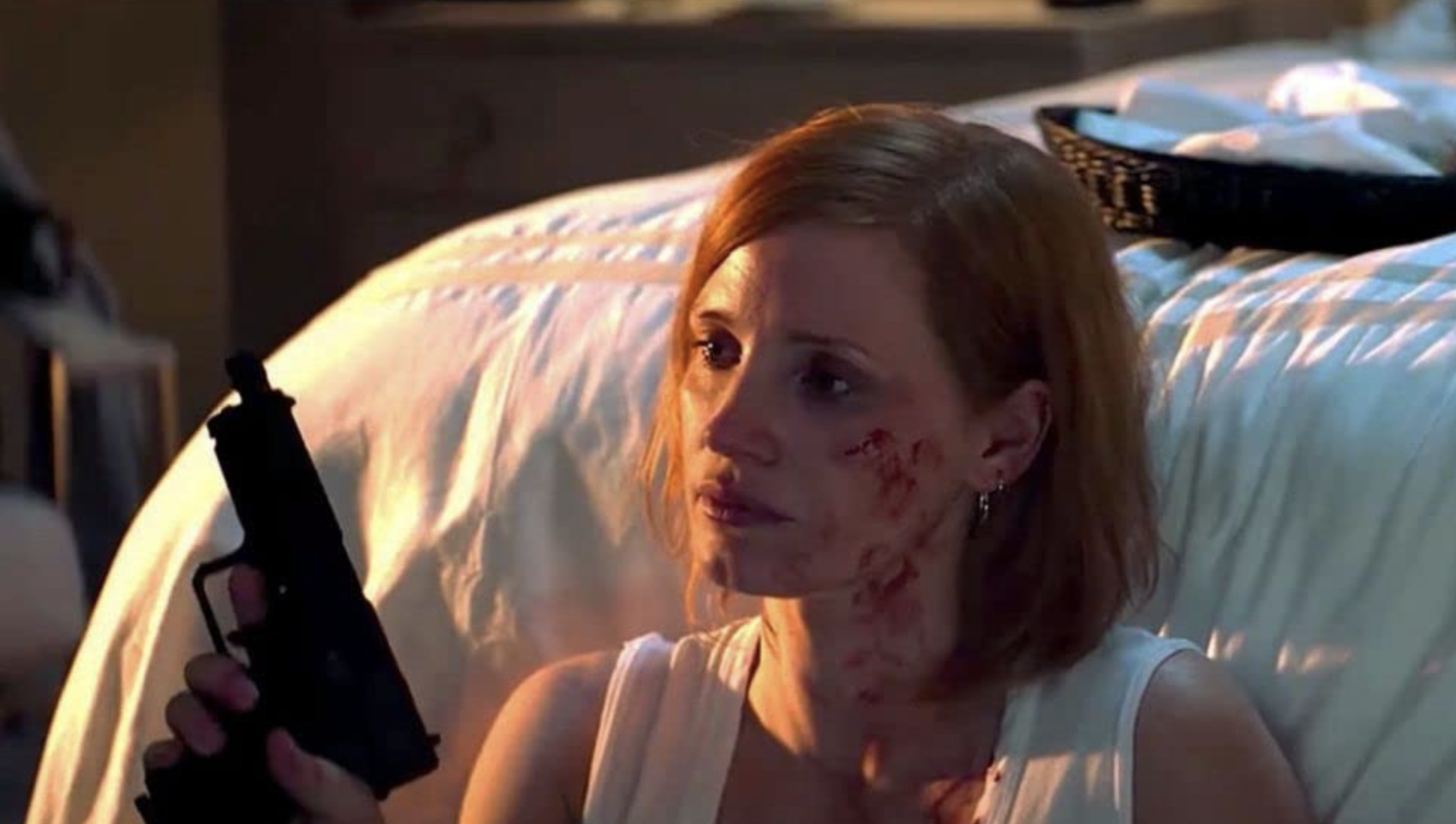 Sherlock Holmes may have deduced where we would be a hundred years later:

“Good old Watson. You’re the one fixed point in a changing age. There’s an east wind coming all the same, such a wind as never blew on England yet. It will be cold and bitter, Watson, and a good many of us may wither before its blast. But it’s God’s own wind nonetheless, and a cleaner, better, stronger land will lie in the sunshine when the storm has cleared.”

The chilling yet touching exchange between Holmes and Dr. Watson at the end of the final Holmes story in the canon, “His Last Bow,” could well describe how the China virus would devastate the Western world. But as America begins to recover, justifying Holmes’s optimism, its once-great entertainment industry appears doomed. Empty movie houses can of course be partly blamed on the pandemic, but not entirely. Box-office receipts hit a twenty-five-year low in 2017. It picked up a little last year thanks to Disney keeping it afloat with and without the Marvel Comics Universe, but almost everything else faltered. For Hollywood was diseased long before the virus left Wuhan.

The disease, progressivism, afflicts the mind instead of the body, and the only cure is common sense. But those infected would rather spread the malady like latter-day Typhoid Marys than take the red-pill vaccine. What they don’t realize is that their elitist bubble can be quarantined from the outside as well as within — by the entertainment-starved masses that reject everything they stand for. And the most self-destructive thing they stand for is man-hatred.

The erasure of strong male role models from the screen has been quite remarkable, and greatly accelerated in the two years since my first column for this magazine. In it, I used the tenth anniversary of the hit action movie Taken to explain why it would not have been made in 2018, due to such archaic precepts as a paternal hero rescuing his comely teen daughter from Islamic white slavers. Back then it was merely awkward. Today, a white man saving a helpless girl from the brown-skinned villains sexually abusing her would trigger every executive suite in Hollywood. They would not only condemn the story, they’d apologize for it having been produced by one of them in the first place. That regular folks would welcome a similar film today carries no weight with them. Progressivism has warped their brains.

Oh, they’ll still make Taken-style action films, all right — the formula works fine — but only with a Jessica Chastain as the star instead of a Liam Neeson. Of course they’ll lose millions when the fantasy of the gender-constrained Chastain as a deadly assassin outfighting dozens of burly men gets laughed off the screen by the few normal viewers, but that’s a small price to pay for peer approval.

Thus the unintended travesty film Ava came to be. Dilbert cartoonist and best-selling persuasion books author Scott Adams made an invaluable observation on the picture in a recent episode of his popular podcast, Coffee with Scott Adams:

It’s one of these action movies in which the hero, in this case played by Jessica Chastain, kills lots and lots of bad guys from the beginning to the end…. In what other situation do you get a person from one demographic group, in this case a woman, who can slay an unlimited number of people from another demographic group, in this case men, and that’s okay?… Has there ever been a movie in which a male hero violently dispatches dozens and dozens, if not hundreds, of female characters? No…. And so I ask you this: What is the impact on our youth of watching a female character killing unlimited male characters but never the reverse?… I feel like it’s devaluing men, and sufficiently so that we probably ought to ban those movies. I think if we’ve gone so far … with this political correctness, you either have to make everything okay, say, “All right, anybody can kill anybody,” … or you have to say … “I find that unacceptable.” And I will boycott any movie that has a female character who is killing exclusively … male characters as entertainment. Because I’m not sure that’s entertainment.

Clearly a large number of viewers would agree with Adams, and are individually boycotting the current anti-male, anti-normal entertainment fare. To which Hollywood mavens respond, “To hell with them if they can’t take a woke.” They not only dismiss the enormous potential audience, they detest it as a group of Trump-voting rubes. Which they canonly do because they have communist China financially watching their backs and supporting their left-wing idiocy.

The fact that regular people will avoid such Warner products like the progressivism plague is of secondary value to virtue-signaling.

An industry that long celebrated manly virtue in the face of eternal challenges — love, war, family, crime, business, politics, achievement — now demeans masculinity as toxic and masculine dreams as banal. So a gelatinous Hollywood fool like Seth Rogen can unabashedly blast the American spirit that President Trump tapped into — specifically our desire to boldly go where no man has gone before, into space, the final frontier. Rogen tweeted his contempt for Trump’s space program with the standard laptop tough-guy profanity that would stick in his throat if he ever came face to face with a conservative man: “Who in the f**k gives a flying f**k about putting motherf**kers on The Moon and Mars?”

Former liberal hero John F. Kennedy did, as does every man inspired by Jules Verne, Arthur C. Clarke, Robert Heinlein, the Mercury Seven, and Captain Kirk. But for Seth Rogen and his ilk, that was a long time ago in a galaxy far, far away — otherwise known as the United States of America. Hollywood used to be part of it but is no longer. It is now an actual No Man’s Land. For instance, Warner Brothers just signed Patrisse Cullors, a co-founder of the openly Marxist group Black Lives Matter, to a multi-year deal across all of its programming platforms. A once-stated goal of BLM in their since omitted “What We Believe” page is the destruction of the traditional family with men as traditional heads of households: “We disrupt the Western-prescribed nuclear family structure by supporting each other as extended families and ‘villages’ that collectively care for one another, especially our children.” According to the Warner press release, the Cullors deal “encompasses scripted and unscripted series, longform series, animated and kids programming.” They have to start brainwashing children early, teaching them what a rotten, racist patriarchy this country is. The fact that regular people will avoid such Warner products like the progressivism plague is of secondary value to virtue-signaling.

For most of its history, the men who ran Hollywood clearly delineated the natural order of humanity — men as hunter-gatherers to the point of savagery (gangsters and gunfighters) and women as nourishers and tamers of male excess who brought them back from the brink. But those moguls are no more.

There remain a few biologically male decision-makers in Hollywood, but only the lowest form of the species — male feminists, who have no qualms about humiliating themselves. In a nauseating October video, eunuchoid actor Mark Ruffalo went naked along with Sarah Silverman, Amy Schumer, Tiffany Haddish, and other unattractive semi-celebrity women to urge people to vote. They certainly encouraged my vote — for Trump and against these losers.

While it’s too late to save Hollywood, it helps to recognize the class of men who helped build it. I recently came across a picture of four of them — Clark Gable, Van Heflin, Gary Cooper, and James Stewart — at a white-tie New Year’s Eve party circa 1956–57. Gable, Cooper, and Stewart are legends. Heflin (Shane, 3:10 to Yuma) was one of the most dependable character actors ever. A decade earlier, Gable, Heflin, and Stewart had abandoned their cushy stardom to risk their lives in World War II combat. Coop tried to enlist but was rejected on medical grounds. Of course there’s always ninety-year-old Clint Eastwood, who also served in the Army and celebrates it in his films (Heartbreak Ridge, American Sniper, The 15:17 to Paris), triggering the younger punks in his business. 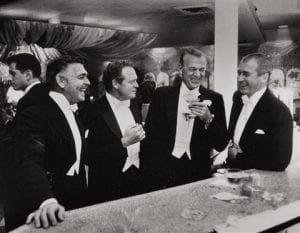 So when you see the likes of Rogen, Ruffalo, and other emasculated actors lecturing to the rest of us, compare them to their predecessors and laugh at them while avoiding their films. Soon, better men outside the Tinseltown quarantine, immune to progressivity, will take their place. And they will have great stories to choose from that Hollywood left on the table — such as about male heroes and romantic heroines. Then, when the storm has cleared, a cleaner, stronger movieland will lie in the sunshine.

Lou Aguilar is a published novelist, produced screenwriter, and arts culture essayist. His new novel, The Christmas Spirit — a Yuletide romantic ghost story — was intended as the perfect traditionalist Christmas gift, and is available at Amazon, Barnes & Noble, and great American bookstores.