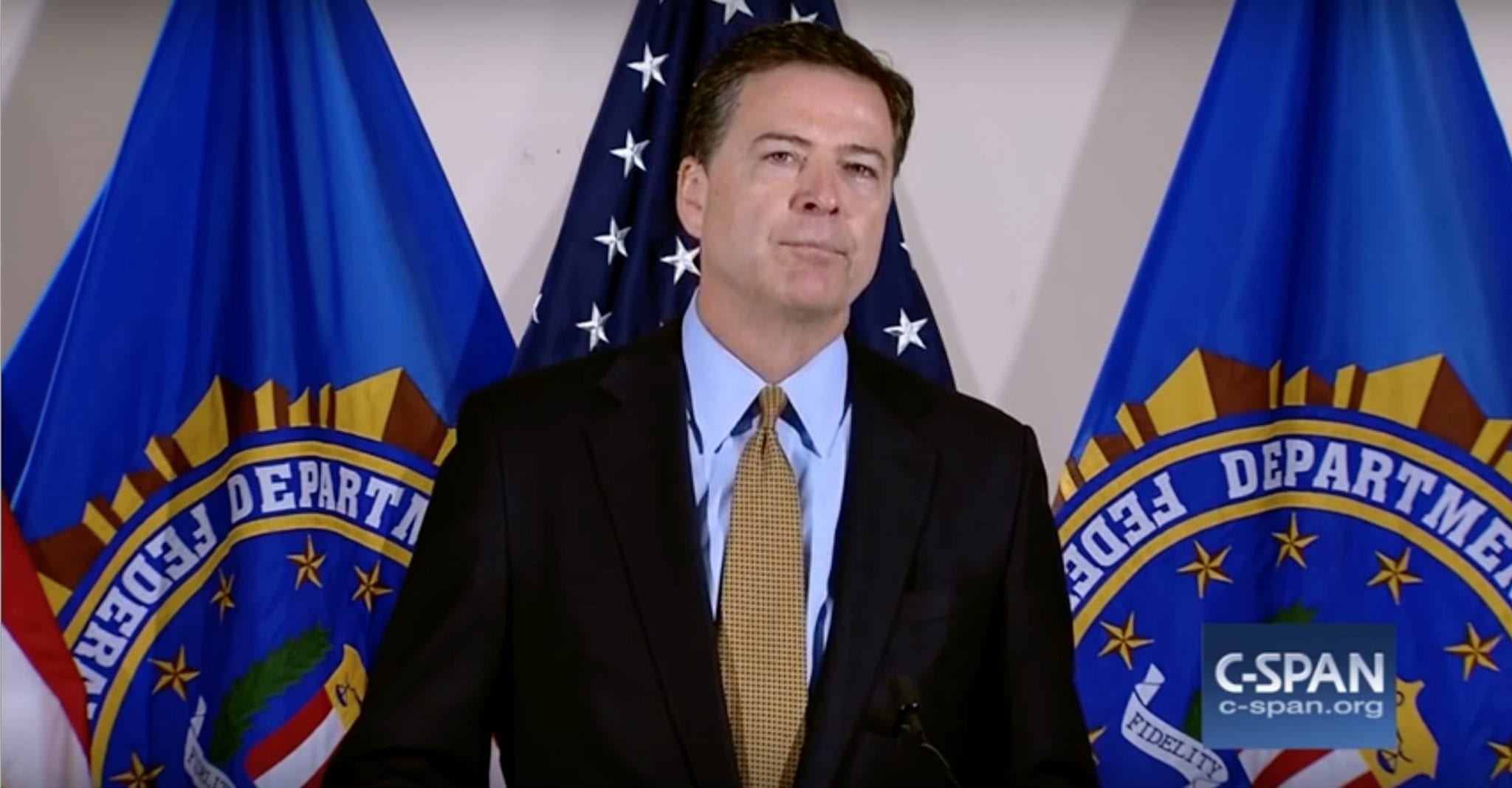 In his bestselling The Russia Hoax: The Illicit Scheme to Clear Hillary Clinton and Frame Donald Trump, Fox News legal and political analyst Gregg Jarrett captures the very heart of a very, very big scandal — arguably the biggest scandal in all of American history. And that’s saying something.

Right off the bat, in a preface titled “An Insidious Abuse of Power,” Jarrett launches on the beginning of a very detailed, decidedly specific recounting of the cunning game played by powerful government elites determined to stop the election of Donald Trump — and when that failed, to undermine his presidency with the goal of abruptly ending it.

The story is chilling. Among other things Jarrett writes lines like these:

* “Armed with immense power, Comey and other top officials at the FBI became the law unto themselves. The end would justify the means…”

* For “reporters and anchors…their bias against Trump was so impassioned and pervasive that it became impervious to the facts.”

* Fired FBI Director James Comey “admitted pilfering government memorandums… for the sole purpose of triggering a special counsel who just happened to be his longtime friend and ally, Robert Mueller.”

* “…the FBI, as well as the Department of Justice, had become cesspools of corruption that played a direct hand in attempting to influence the election and subvert the democratic process.”

Accustomed as I am to reading books with the ever ready yellow highlighter, in reading The Russia Hoax I quickly realized I was coloring every page of the book.

The very first sentence of the first chapter is short and directly to the point:

“This is a story of corruption.”

Indeed it is, and what a stunning story it is. As Jarrett says, this is a “cautionary annal of the damage wrought when those who serve in government seek to undermine it.” And but of course the story begins with… shocker I know… Hillary Clinton.

The Clinton part of this tale is told in pointed detail. Gregg Jarrett is, among other things, a lawyer. Thus his recounting of what the new Secretary of State did in terms of playing a game with her infamous emails is matched with the exact cites of which federal laws were being so brazenly violated.

He points out, for example, that when “a government official creates or obtains a record during the course and scope of his or her employment, the Federal Records Act and the Foreign Affairs Manual require that it be captured and preserved by the agency.” (Italics by the author.)

Jarrett follows with the specific legal citation that should have been used because Hillary Clinton “should have been charged with stealing government documents.” Jarrett notes this, pointedly and specifically citing “18 U.S.C. 641,” which reads as follows:

Whoever embezzles, steals, purloins, or knowingly converts to his use or the use of another, or without authority, sells, conveys or disposes of any record, voucher, money, or thing of value of the United States or of any department or agency thereof… or whoever receives, conceals, or retains the same with intent to convert it to his use or gain, knowing it to have been embezzled, stolen, purloined or converted… shall be fined under this title or imprisoned not more than ten years, or both.

This description is followed by this Jarrett question: “Isn’t this precisely what Clinton did? She converted government documents for her use on a private server in her home.” Indeed. And more… oh so much more.

Jarrett points to “18 U.S.C. 2071 (b)” — which prohibits a government employee from “willfully and unlawfully” doing the following. If said employee “conceals, removes, mutilates, obliterates, falsifies, or destroys the same shall be fined under this title or imprisoned not more than three years, or both.”

Safe to say, Clinton’s directive that her thousands of emails be deleted and having her server wiped clean more than meets the “legal requirements of these crimes.”

Of course, while Hillary Clinton’s corruption was the starting point for all of this, it is far from alone in being a driving factor in The Russia Hoax.

Considering all the “deep doo-doo” Hillary was in (to borrow a favorite phrase of the late President George H.W. Bush), she needed serious bureaucratic help. And that help was forthcoming — from FBI Director James Comey.

Jarrett, again in precise detail, tells the tale of Comey’s infamous July 5, 2016 press conference that had the FBI Director clearing Clinton. If anything, Jarrett understates when he describes this jewel of Establishment Insider backscratching as “one of the most bizarre, bewildering, and incomprehensible explanations of a legal case in modern American history.” Even I, a humble non-lawyer, watched that event unfold, listening to Comey read what Jarrett describes correctly as “a lengthy statement that presented a compelling case of how Clinton repeatedly violated the law.” And after doing so, I listened, astonished, as Comey suddenly said:

“Although there is evidence of potential violations of the statutes regarding the handling of classified information, our judgment is that no reasonable prosecutor would bring such a case.”

Say what? Say what???? It’s almost as if James Comey wanted to give a gift to Gregg Jarrett’s book. Gift accepted — and Gregg is off and running in his detailed fashion to vividly illustrate exactly what Comey was about.

There is an explanation of Comey’s “criminal ‘intent’ canard” used “in his quest to exonerate Clinton of any wrongdoing.” By focusing on Clinton’s “intent,” Comey could pretend that the law demands “that a defendant must have intended to break the law in order to be charged or found guilty.” The problem, says lawyer Jarrett: Nowhere in “18 U.S.C. 793 (f) of the Espionage Act,” which governs the law on this problem, does it state that the defendant must, as noted, “have intended” to violate the law. Thus, Comey “either misinterpreted the law or chose to rewrite it.”

There is more in this part of the Hillary tale, oh so much more in detail. Which then leads to the next chapter (literally and figuratively) about “The Fix” that was in to exonerate Clinton. Now comes clear the rest of the starring and supporting cast in this would-be, silent coup d’état. Here is Comey’s Deputy FBI Director, the now fired and referred for criminal investigation Andrew McCabe. Here are found the star-crossed secret lovers, the FBI Counterespionage Section chief Peter Strzok and FBI lawyer Lisa Page. (Strzok, like his bosses McCabe and Comey, now fired, with Page resigning from the Bureau.)

After zeroing in on Clinton and her dealings with the Uranium One “gravy train” — another adventure in detail — Jarrett gets to what is effectively Part Two of this prospective coup: “The Fraudulent Case Against Donald Trump.”

Which is to say, this part of the tale is the reason for the first part. There was such antipathy to Donald Trump from the entire (bipartisan) Washington “Swamp” and the Old Order that runs it — not to mention from Hillary Clinton herself — that all the players involved had one goal in mind. To borrow the line from the Clint Eastwood Secret Service thriller In the Line of Fire, that line is: “Take the subject out.”

And thus the no-holds barred and decidedly “fraudulent” case against Donald Trump.” Designed to take first the Trump candidacy, and then when that failed, the Trump presidency… out.

Jarrett shines in telling this startling tale. This is a detailed recounting of the effort to construct a knowingly false legal case of “collusion” between Trump and the Russians to steal the American presidency. The late Tom Clancy and Ian Fleming (respectively the creators of fictional spies Jack Ryan and James Bond) could not possibly have conjured a more elaborate conspiracy tale that compares to the real life accounting of what all these bureaucrats and Washington Insiders were about.

Out come the parade of players and shenanigans with names like then-CIA Director John Brennan, ex-British spy Christopher Steele, the opposition research firm Fusion GPS and its founder, one-time investigative reporter Glenn Simpson. Here one will find the tale of the “dossier” that alleged all kinds of unverified and frankly bizarre behavior to Trump — with zero proof beyond a laughably fertile imagination. There is senior Justice Department official Bruce Ohr, whose wife Nellie — lo and behold! — was “a paid employee of Fusion GPS who wrote extensively about Russian topics.”

It is just astounding to read this book and realize the scope and intensity that went into not only the writing of the book but the actual doing of all the events described in The Russia Hoax.

Gregg Jarrett has done a masterful job of pulling all the information out there together in one place — and doing the hard digging of details, particularly the legal references, that illustrate exactly just how disturbing this episode in American history has been.

As this is written this story is a long, long way from resolution. The charge of Trump-Russia collusion to steal a presidential election has turned out to be a farce, turning now to, no kidding, allegations of campaign finance law violations.

Long after this episode of disturbing history is in the historical rear-view mirror, Gregg Jarrett’s The Russia Hoax will be a classic of the Trump era. It is a detailed recounting of the players and the plays by a furious Washington Establishment designed to upend the freely elected winner of the 2016 presidential election. Not unlike the Woodward and Bernstein investigation of Watergate in their bestselling Nixon tale, All the President’s Men, no history of the Trump presidency will be complete without The Russia Hoax.

Most importantly, the Russia Hoax will serve as a warning to future generations of Americans that, as President Ronald Reagan once said:

“Freedom is never more than one generation away from extinction. We didn’t pass it on to our children in the bloodstream. It must be fought for, protected, and handed on for them to do the same, or one day we will spend our sunset years telling our children and our children’s children what it was once like in the United States where men were free.”