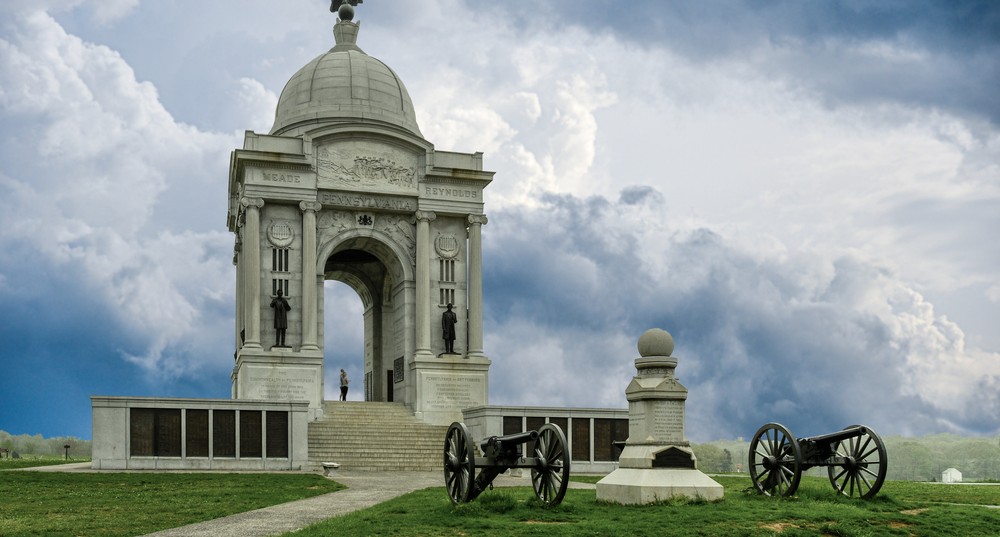 One hundred fifty-eight years ago, on July 1, 2, and 3, Union and Confederate armies clashed at the small south-central Pennsylvania town of Gettysburg, located a few miles north of the Maryland border. Over those three days, courageous soldiers on both sides fought a battle of biblical proportions. As President Lincoln would later remark, both sides in the Civil War read the same Bible and prayed to the same God, and each invoked God’s aid against the enemy, “but the prayers of both could not be answered.”

In the King James Bible’s Judges 5:20-21, the Israelites win a great battle against the Canaanites and their captain Sisera. Deborah, a prophetess and judge, sings praise to the Lord for delivering the victory: “They fought from heaven; the stars in their courses fought against Sisera. The river of Kishon swept them away, that ancient river, the river Kishon. O my soul, thou hast trodden down strength.”

Shelby Foote, the great novelist, lecturer, playwright and historian, wrote the best history of the American Civil War, titled simply The Civil War: A Narrative. Walker Percy called Foote’s three-volume work “an unparalleled achievement, an American Iliad.” In 1994, the Modern Library published Foote’s narrative of the Gettysburg campaign under the title Stars in Their Courses. Foote understood that Gettysburg was an epic campaign — the largest battle of the war; indeed, the largest battle ever fought on the North American continent.

Foote begins his Gettysburg narrative with Confederate Gen. Robert E. Lee’s fateful plan to move north into Pennsylvania, following his great victory over the Union Army at Chancellorsville in May 1863. Foote writes of Lee, “He would march without delay into Pennsylvania, deep in Washington’s rear, where a victory might well prove decisive, not only in his year-long contest with the Army of the Potomac, in which he had never lost a major battle, but also in the war.” When Lee outlined his bold plan to President Jefferson Davis and his Cabinet, all but one member supported the invasion of the North.

Lee had reorganized the Army of Northern Virginia in the wake of Stonewall Jackson’s death at Chancellorsville. Now his corps commanders were James Longstreet, Richard Ewell, and A.P. Hill, all good commanders but none of whom had Jackson’s daring. When Lee heard of Jackson’s death, he remarked, “I know not how to replace him.” Foote again writes of Lee, “Always in his mind was the missing Jackson.” Lee hoped to position his army between the Army of the Potomac and Washington, Philadelphia, and Baltimore, and on ground of his own choosing force the Union Army to attack him as they did at Fredericksburg in December 1862. Jackson’s absence and J.E.B. Stuart’s failure to remain in daily communication with Lee (Stuart’s cavalry was the “eyes and ears” of Lee’s army) would prove costly when the armies met at Gettysburg.

Late in June, President Lincoln sacked “fighting” Joe Hooker, who was defeated at Chancellorsville, and replaced him with Gen. George Meade. Meade’s army was divided into six corps headed by generals Reynolds, Hancock, Sickles, Sykes, Sedgwick, Howard, and Slocum. The Army of the Potomac outnumbered Lee’s army by some 30,000 troops, but Lee had overcome even greater odds in previous battles. Meade’s plan — outlined in the “Pipe Creek Circular” that he issued just days before the battle — was to have Lee attack him along a defensive position along Pipe Creek, near Westminster, Maryland.

As so often happens in war, the plans of generals dissolve when contact is made with the enemy — it is what Carl von Clausewitz called the “friction” of war. Union Gen. John Buford spotted Lee’s army on the march near Cashtown, just a few miles west of Gettysburg. Confederate Gen. Henry Heath’s division moved cautiously toward Gettysburg in search of supplies. Buford surveyed the ground and decided to make a stand on the ridges outside the town of Gettysburg. Buford’s dismounted cavalry fired the first shots of the battle early on July 1, 1863. As Heath’s infantry moved forward, Burford’s men bought precious time for Gen. John Reynolds’ infantry to arrive on the field. There were clashes at Willoughby Run and McPherson’s Ridge, an unfinished railroad cut, and a wooded area where Reynolds directed the Iron Brigade to wade into the enemy and was killed by a Confederate sniper.

Meanwhile, Confederate troops entered the battlefield from the north and advanced towards Oak Hill. By late afternoon, Union forces began to crumble and retreat across Seminary Ridge and through the town. Regiment by regiment, Union forces gathered on Cemetery Hill and Culp’s Hill. “These two hills,” Foote noted, “their summits a hundred feet above the town … afforded the [Union forces] a strong position — indeed a natural fortress.” Lee instructed Gen. Ewell (Jackson’s replacement) to take Cemetery Hill “if practicable.” Ewell hesitated where Jackson would have attacked. The Army of Northern Virginia had won the day, but Union forces occupied the high ground on Culp’s Hill and along Cemetery Ridge, which included Cemetery Hill at one end and Big and Little Round Top at the other end.

July 2 was the bloodiest day of the battle. Lee, against the advice of Gen. Longstreet, attacked all along the Union line. The fighting was fierce at the Peach Orchard, the Wheatfield, Devil’s Den, Little Round Top, and later on Cemetery Hill. At several moments, it appeared that the Union line would be pierced, but heroics on Little Round Top and at the center of the Union line (where 262 troops of the First Minnesota attacked more than 1600 Confederate troops to buy precious time for reinforcements) saved the day for the Union Army, and perhaps for the nation. By nightfall, Foote writes, “moonlight glistened eerily on the corpse-strewn valleys and hillsides, its refulgence no longer broken by the fitful and ubiquitous pinkish-yellow stabs of muzzle flashes.”

On July 3, there was morning fighting on Culp’s Hill, but the real show began in the afternoon, when 140 Confederate guns opened up on Cemetery Ridge. It was, writes Foote, “the greatest concentration of artillery ever assembled for a single purpose on the continent.” After the cannonade ceased, some 15,000 Confederate troops marched toward the Union line in what historians later called “Pickett’s Charge.” Foote described it as follows:

They came on at a steady rate of about one hundred yards a minute, and before they had been three minutes in the open … the Union batteries, as if in quick recovery from the shock of seeing them appear thus, massed for slaughter, began to roar. The gray lines dribbled rag-doll shapes, each of which left a gap where it had been while still in motion. Flags plunged with sudden flutters in the windless air, only to be taken up at once as the fallen color-bearers were replaced.

A few Confederate troops under the command of Gen. Lewis Armistead briefly breached the center of the Union line, but they were killed or captured. It was a Confederate disaster. Lee knew it and placed all the blame on himself.

The Battle of Gettysburg produced some 50,000 casualties (dead, wounded, and missing). Lee’s second invasion of the North (Antietam was the first) had failed. The fortunes of war undid Lee’s plan. Foote concluded, “Fortuity itself, as the deadly game unfolded move by move, appeared to conform to a pattern of hard luck; so much so, indeed, that in time men would say of Lee, as Jael had said of Sisera … that the stars in their courses had fought against him.”