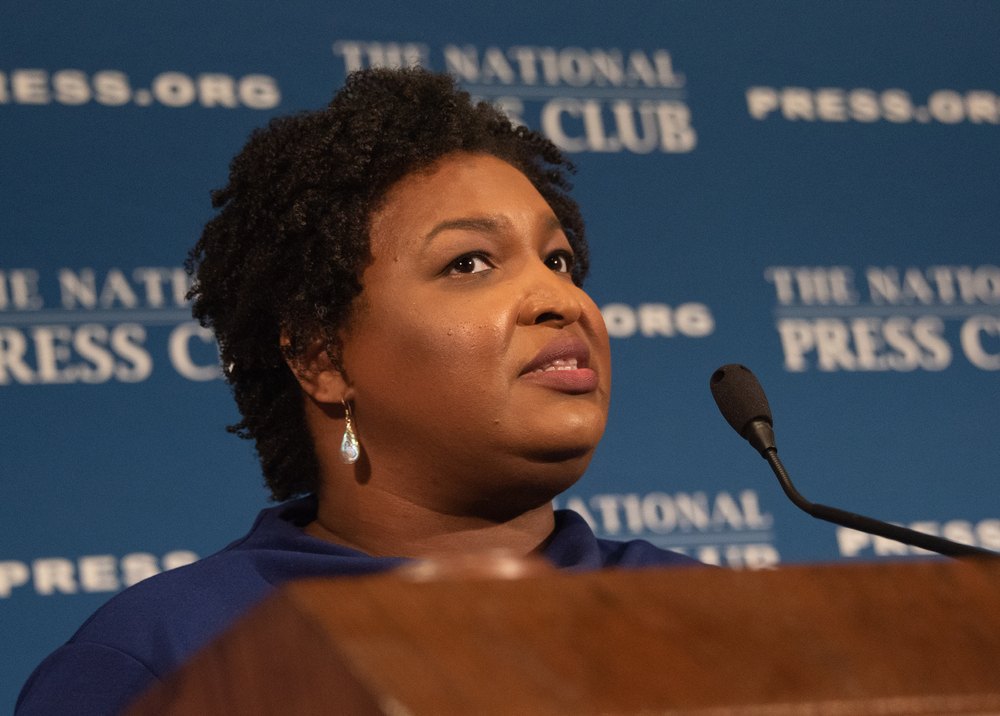 NEW YORK — Georgia Republicans reportedly are less than gung-ho about wading through molten glass to reach the polls on Tuesday. They all know that control of the U.S. Senate and, potentially, all of Washington, D.C. rides on the re-election of GOP senator Kelly Loeffler or David Perdue — and ideally both. Despite the Himalayan stakes of this runoff, a cohort of Republicans seems to believe that there is little point in casting their ballots for Loeffler and Perdue. They fear that their votes will not count. So, they reckon, why bother lining up to vote if their genuine ballots simply will be neutralized by fraudulent ones, physically thrown away, or electronically erased?

“With over 70 percent of Republicans, according to recent polling, now believing that November’s presidential election was not ‘free and fair,’” The Guardian of London reported, “there are concerns that a collapse in trust in electoral processes could cost conservatives dearly at the ballot box.”

“On social media platforms Twitter and Parler, hashtags such as #StoptheSteal show what appear to be Republican voters suggesting they will not cast a ballot in the upcoming runoffs because of a distrust in the election system,” wrote VOA News’ Matt Haines.

This perspective, unfortunately, puts things perfectly upside down: Each and every Peach State Republican, pro-freedom independent, and thinking Democrat needs to vote on Tuesday for Loeffler and Perdue. They are unlikely to win if they just squeeze by. Instead, their margins of victory must exceed the margin of fraud. A squeaker will not suffice. A tsunami of pro-Loeffler/Perdue votes will secure these priceless seats.

While this ho-hum attitude is unfortunate and potentially fatal, it’s hardly surprising. Since November 3, pro-Trump Georgians have had every right to feel a blend of resignation and rage. The evidence of rampant fraud must have them catatonic to the point of being unable to reach their polling stations on January 5. Peach State election integrity is the pits.

Here is a quick tour of just a few ways that fraud — or, less broadly, incompetencies, irregularities, and illegalities — marred the presidential election in Georgia.

Republican Secretary of State Brad Raffensperger let himself get crushed beneath the weight of Democrat activist Stacy Abrams’ relentlessness. He agreed to a consent decree that granted Abrams many demands, among them: looser rules regarding absentee ballots, unsupervised ballot drop-off boxes on unguarded sidewalks, and lower signature-verification standards on mail-in ballots.

Despite Raffensperger’s maddening appeasement of Abrams, he nonetheless announced a probe of 250 cases of possible vote fraud. Affidavits by numerous eyewitnesses confirm suspicious-to-criminal behavior before, during, and after Election Day.

As Jordan Davidson explained in The Federalist, a lawsuit by President Donald J. Trump and the Georgia Republicans identified “voting irregularities and fraud sufficient in scale to place the election result in doubt,” as state GOP chairman David Shafer announced as the litigation was filed. These shenanigans included:

Assuming no overlaps, these 386,570 votes alone are almost 33 times Biden’s 11,779-vote margin of “victory.” Absent these bogus ballots, President Trump would have breezed to triumph in Georgia.

Georgians who believe in magic should love one particular aspect of their state’s experience with absentee ballots. As detailed December 7 on page 23 of State of Texas v. Commonwealth of Pennsylvania, State of Georgia, State of Michigan, and State of Wisconsin:

In other words, despite the number of absentee ballots increasing 613 percent in 2020, the rejection rate for erroneous absentee ballots, compared to 2016, plunged 94 percent.

On November 14, Susan Voyles audited the recount at Atlanta’s Georgia World Congress Center. “Most of the ballots had already been handled; they had been written on by people, and the edges were worn,” stated her sworn, signed, and notarized affidavit. “However, one batch stood out. It was pristine. There was a difference in the texture of the paper — it was as if they were intended for absentee use but had not been used for that purpose. There was a difference in the feel.”

“In my 20 years’ of experience of handling ballots, I observed that the markings for the candidates on these ballots were unusually uniform, perhaps even with a ballot-marking device…approximately 98% constituted votes for Joseph Biden. I only observed two of these ballots as votes for President Donald J. Trump.”

Voyles declared that recount “operations were sloppy and led me, in the case of at least one box I reviewed, to believe that additional absentee ballots had been added in a fraudulent manner.”

“I am a registered Democrat,” Carlos E. Silva said in his November 17 affidavit. On November 15, he observed DeKalb County’s recount at a precinct in Stonecrest, Georgia. He watched two women count ballots at a table. “I noticed that they all had a perfect black bubble and were all Biden select. I was able to observe the perfect bubble for a few minutes before they made me move away from the table.” Silva added, “I heard them go through the stack and call out Biden’s name over 500 times in a row.”

“I also saw absentee ballots for Trump inserted into Biden’s stack and were counted as Biden votes,” Silva wrote. “I also observed throughout my three days in Atlanta, not once did anyone verify signatures on these ballots. In fact, there was no authentication process in place and no envelopes were observed or allowed to be observed.”

“I have reached the conclusion that in the counties I have observed, there is widespread fraud favoring candidate Biden only,” Silva judged. “There were thousands of ballots that just had the perfect bubble marked for Biden and no other markings in the rest of the ballot.”

“I am a registered Democrat,” Mayra L. Romera wrote in her November 17 affidavit. Like Silva, she observed Cobb County’s recount in Marietta on November 16. She saw that “hundreds of these ballots seemed impeccable, with no folds or creases. The bubble selections were perfectly made (all within the circle), only observed selections in black ink, and all happened to be selections for Biden.” She continued: “…signatures were not being verified and there were no corresponding envelopes seen in site.” Romera decided “under penalty of perjury”… “I believe there was fraud was [sic] committed in the presidential election…”

“The November 3, 2020 election was chaotic and the results cannot be trusted,” according to the December 17 Chairman’s Report of the Election Law Study Subcommittee of Georgia’s State Senate. This chilling, 15-page, single-spaced document confirms 13 different categories of election anomalies, abnormalities, and abuses.

At a December 3 State Senate hearing, the report explains, “Witnesses testified to hostility to Republican poll workers during the recount…doors were locked, and Republican poll watchers were sent home early or given menial assignments.” Also, throughout the state, election monitors “were often kept at an unreasonably long distance” and “blocked from having the visual ability to see what was written on the ballots or to have any meaningful way to check the counting or to double-check that what was counted was actually assigned to the right candidate.”

“The Secretary of State’s Office,” the report concludes, “has turned a blind eye to fraud to the point that it ought to be considered gross negligence.”

Republican Governor Brian Kemp’s invertebrate non-reaction to these and multifarious other outrages at the Peach State’s polls makes 40-watt Jeb Bush look like President Trump on Five Hour Energy Drink. Kemp maintained an eerie near-silence throughout this slow-motion execution of democracy. He also refused to call a special session of the GOP-controlled state legislature to disable at least some of the machinery in Democrats’ vote-fraud factory: Improved signature checks on absentee ballots, guaranteed access for observers in vote-counting rooms, stricter penalties against those who impede their work, removal of unwatched ballot drop boxes, cleanup of obsolete registration records that allowed 10,315 dead people to vote, enfranchised 66,247 voters under 18 years of age, empowered 305,701 voters who requested absentee ballots before or after the relevant legal deadlines, and much more. These 382,263 illegal votes alone equal 3,245 percent of Biden’s 11,779-vote margin of “victory.”

Georgia Republicans and conservatives have every reason to be redder than Snappy Tom with rage over all of this and more. However, taking it out on the blameless Loeffler and Perdue would chop off one’s head to spite one’s freckle. Some Peach State Republicans might enjoy a warm, runny feeling on Election Night if Loeffler and Perdue lose and, somehow, that sticks it to Kemp, Raffensperger, and Supreme Court Justice John Roberts and his colleagues (whose refusal to hear the aforementioned Texas case was akin to derelict umpires who declined to call a Game Seven, ninth-inning, World Series-hinging, throw to home plate).

Whatever odd joy such self-sabotage might inspire soon would be replaced with seller’s remorse, as Senate Majority Leader Chuck Schumer (D – New York) connived with House Speaker Nancy Pelosi of California to pass radical, far-Left bills to pack the Senate with four new Democrat members from the 51st and 52nd states of Washington, D.C. and Puerto Rico, rocket taxes skyward, install the Green New Deal, enact Medicare for All, balloon taxpayer dollars for abortions, pop the balloon on police funds, and pack the Supreme Court, to bless this mess.

And forget about the Senate conducting hearings on the Crime of the Century: Democrats’ theft of the White House on and about November 3, 2020.

Republicans and conservatives from coast to coast are relying on their brothers and sisters in Georgia to rescue our beloved nation from this horror show. The best revenge against the vote fraudsters is a tidal wave of genuine, honest votes for Kelly Loeffler and David Perdue. Their victory will set the vote thieves on their heels. And, once re-elected, Loeffler and Perdue can demand that a Republican Senate inspect every corner of the country for every speck of evidence of the Crime of the Century. A GOP Senate can drag these crooks onto Capitol Hill, bring them before the relevant committees, and expose them beneath the bright lights of legislative oversight.

Sunshine is the best disinfectant. And Kelly Loeffler and David Perdue are the twin suns whose rays will help expose and correct the evil that oozed from their state and others on Election Day 2020.

Deroy Murdock is a Manhattan-based Fox News Contributor, a contributing editor with National Review Online, and a senior fellow with the London Center for Policy Research. Bucknell University’s Michael Malarkey contributed research to this opinion piece.