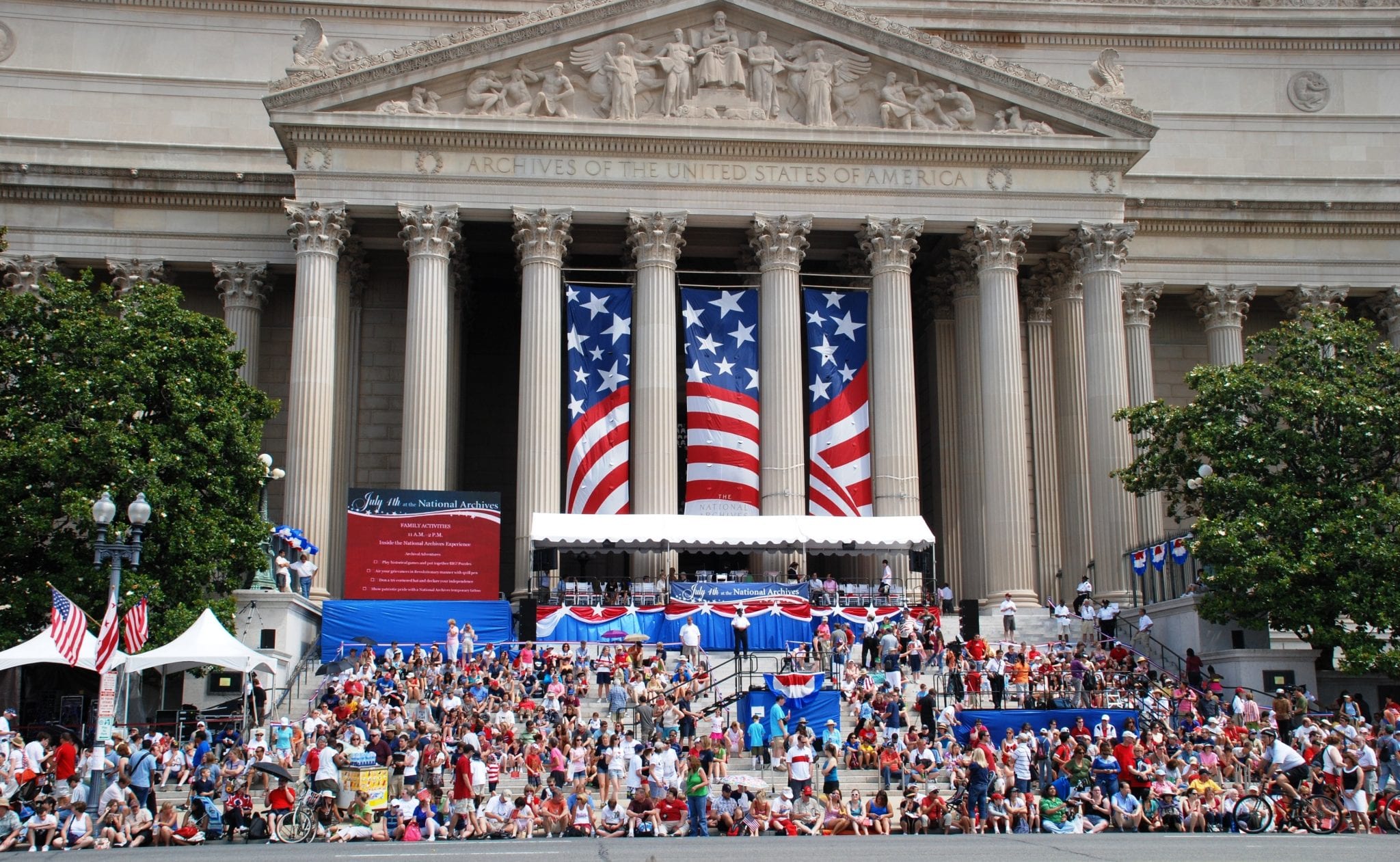 It was a parade — a big, Washington-style parade.

As reported here by C-SPAN in June of 1991, the National Victory Celebration Parade — reviewed by a proud President George H. W. Bush, who wore a tie decorated with American flags — was described this way, bold print for emphasis supplied:

Bands played, troops marched, flags flew, and military weaponry and equipment rolled down Constitution Avenue during the $12 million National Victory Celebration Parade in Washington, D.C. The parade, marching before a reviewing stand where the president, vice-president, members of the Cabinet, and their spouses watched the proceedings, was the main event in the National Victory Celebration marking the victory of the Persian Gulf war. Stealth bombers, Patriot missiles, tanks, and other military hardware were featured in the parade, as were hundreds of troops from the war. A huge crowd applauded the weapons and troops as they passed down Constitution Avenue. Narration was provided for the parade by Major General Streeter, commanding general for the military district of Washington, and Willard Scott, weatherman and television personality.

Earlier Monday, the D.C. Council reiterated its opposition to driving tanks on the city’s streets, tweeting, “We have said it before, and we’ll say it again: Tanks, but no tanks.” In the tweet, the council posted the image of a March 8, 2018, memo in which the Pentagon cautioned against using tanks in the military parade Trump had envisioned, saying, “Consideration must be given to minimize damage to local infrastructure.”

Rep. Don Beyer (D-Va.) tweeted that the administration was ignoring the views of local residents: “Risking damage to local infrastructure and dumping huge piles of taxpayer money onto the never-ending bonfire of Donald Trump’s vanity. My constituents and the other people who live here overwhelmingly do NOT want this.”

No idea where all these D.C. politicians, Congressman Beyer, and all his constituents were in June of 1991 as those “Patriot missiles, tanks, and other military hardware” rolled along Constitution Avenue while the sky over Washington swarmed with military helicopters, Stealth bombers, F-16s, and other military aircraft. But it was a massive military parade — and I distinctly recall being in attendance. It was terrific.

In short, as pointed out a few weeks ago in this space, the appearance of a president at the center of a Fourth of July celebration is hardly new. And as the C-SPAN video of the Bush parade demonstrates vividly, the use of military in a parade has in fact been done before.

But the bald-faced, um, untruths keep coming. Take this whopper from longtime Clinton ally and ex-Virginia Governor Terry McAuliffe. Said he in that Post story:

The Clintons did not take over a decades-, century-old celebration of the nation and insert themselves in the middle of it.

This is laughably not true. As was pointed out in this space:

In 1996, Clinton was busy “inserting himself” into a Fourth of July celebration that took place at Goose Creek Bridge in Maryland. With the TV cameras trained on him, the president — like Ford twenty years earlier, running for reelection — was there to emphasize his environmental agenda by releasing a bald eagle into the wild.

In 2000, there was Clinton “inserting himself” into Fourth of July ceremonies yet again, this time in the middle of New York Harbor aboard the USS Hue City. As the television cameras rolled, according to the official records of “Operation Sail” or “OpSail,” Clinton “reviewed a 17-mile-long formation of imposing, gray-hulled titans — the frigates and destroyers of navies around the world, each man-of-war firing a one-gun salute as the president passed.” Got that? Not only was Clinton reviewing all those ships in front of cameras, but each “man-of-war” that passed him fired “a one-gun salute” to celebrate his presence.

And over on Twitter there was Never Trumper and ex-Bush 43 aide David Frum tweeting:

The U.S. military is a cadre of highly committed professionals with huge responsibilities all over the world. Like all busy professionals, they resent make-work projects that waste time and money.

So. In the revision of history we now learn from David Frum that the Bush parade of 1991 was a “waste of time and money.” Who knew? One can believe that the late president went to his grave passionately believing the opposite.

In sum, what really is all this crock of criticism about the use of the military in a Washington parade, not to mention the appearance of the President of the United States at the center of Fourth of July ceremonies?

It is nothing more than the latest in Trump Derangement Syndrome propaganda.

And, as usual, there isn’t a word of truth in it.