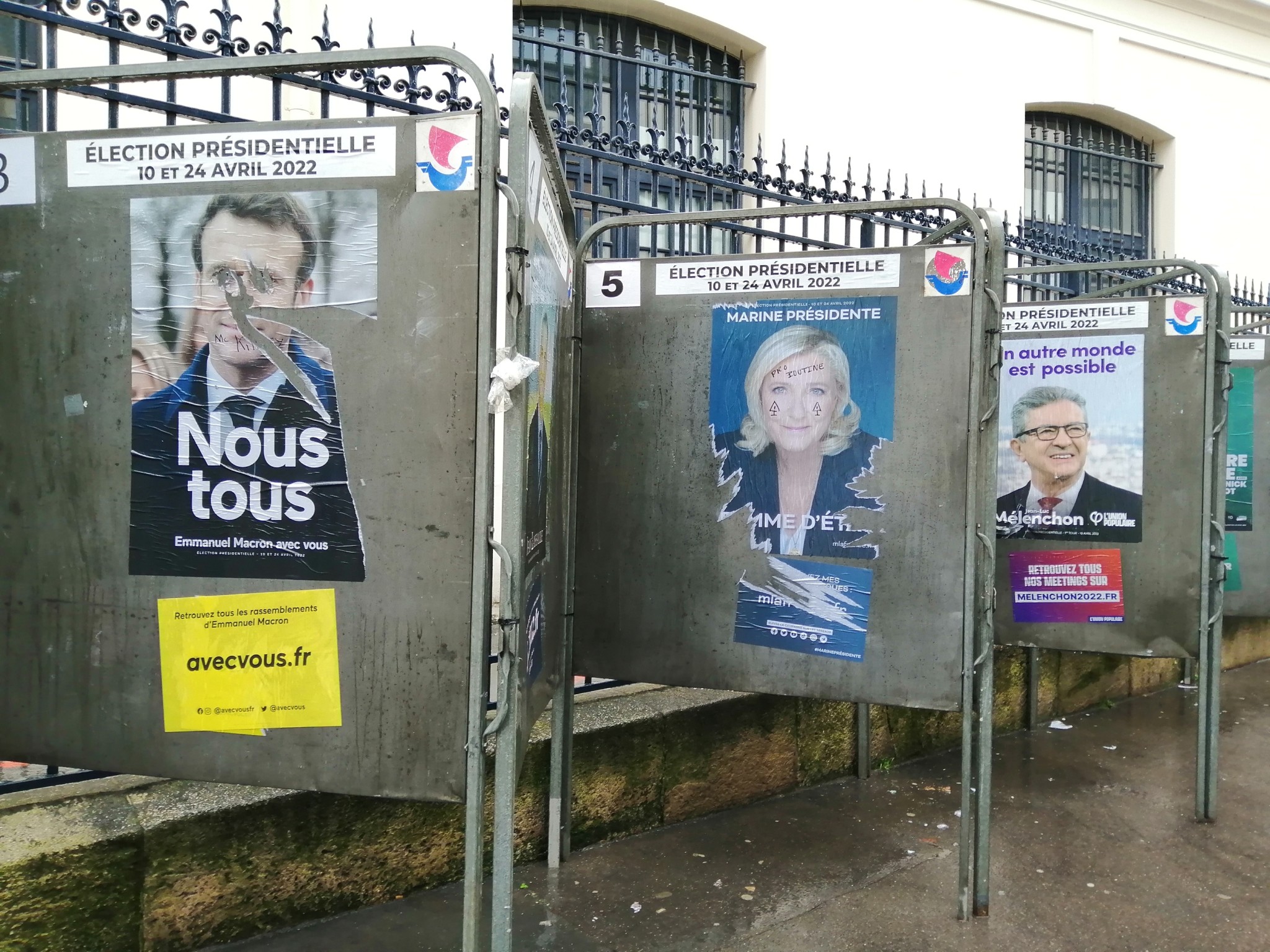 A few days before the first round of the French presidential election, which in effect serves as a primary inasmuch as the different factions of left, right, and center compete for the chance to represent their blocs in the runoff, the leading center candidate, incumbent President Emmanuel Macron of La République En Marche! Party, accused Mateusz Morawiecki of being a “right-wing anti-Semite.”

Morawiecki is not a candidate in France, and it is unclear why Macron is dragging him into the show. Morawiecki, as leader of the Law and Justice Party, is the prime minister of Poland and he is from Wrocław, as is Hubert Hurkacz, Poland’s top men’s tennis player. Hurkacz is not an anti-Semite; or how could he have played in the Miami Open, where he was the defending champion? He lost in the semis to the eventual winner, the young Spanish phenom Carlos Alcaraz Garfia. There was an anti-Semitic inquisition in Spain in the 15th Century, which was a factor in the discovery of America, which shows the mysterious ways of the Creator.

The reader will forgive the detour, but this is roughly the level of coherence that has been on display during the recent campaign in France. If there are anti-Semites in France, they are Macron’s nearest rivals, Jean-Luc Mélenchon, an unreconstructed Stalinoid hater of America, and Marine Le Pen, a reconstructed former heiress of the maybe-reconstructed former xenophobe founder of the party she leads. It’s not over until it’s over, but the likely score as you read this is Macron with a plurality, so the issue is who of the two “extremists” goes up against him in the second inning.

It is a fair question whether more than a few thousand voters in what is expected to be a low turnout will know who stands for what, who is an anti-Semite or a Catholic traditionalist or an unreconstructed Stalinist or a mainline social democrat; or if any of it matters. The final count will scarcely be representative of the French voter, or the French eligible voter.

If the incumbent president wanted to bring anti-Semitism into the campaign, why not pick on his main challenger, the woman from Pas-de-Calais (the constituency she represents in the National Assembly)? After all, she grew up in the shadow of her famous father, Jean-Marie, who led the National Front for decades until she stabbed him in the back and renamed it National Rally and banned the anti-Semites, though the old man protests that he has always been misunderstood and that this is no way to get the right-wing to come together, is it?

The old man, who in actual real fact does seem to have mellowed (he is 94) has expressed support for Éric Zemmour, a Jew who is big on France-eldest-daughter-of-the-Church and who also has the support of Marine Le Pen’s niece, Marion. Zemmour is to the right of Marine and the question is how many votes he will drain from her and whether he will support her in the second dust-up if she makes it.

The quarreling persons of the “national right” (take note, Sohrab Ahmari!) share a core of ideas about France. They see a great old country swamped by immigrants from non-European societies who simply do not get it. They do not have the same intuitive grasp of what it means to be a child of France. That is the problem. And the ideologies that have dominated French politics since Charles de Gaulle left the scene have made it easy for people who do not get it to get in and stay in.

And take over. Transposed to our shores, this is Scott McConnell’s nightmare, and Pat Buchanan’s, and Tucker Carlson’s. And, reader, maybe yours. France is pockmarked with zones like the worst neighborhoods of Chicago where little kids are killed in gangland crossfire. France’s once-vaunted public school system does not teach respect for the values of the republic, nor even reading and arithmetic. The native birth rate is low (Marine wants to give cash credits to multi-children families) while immigrants practice polygamy and female genital mutilation. The “elites” support gender insanity and abortion. Gone are the neighborhood boulangerie and the local bistrot where you could get a swell meal for five bucks, complete with half a liter of red. There has not been a French men’s singles winner of the French Open since Yannick Noah.

That was in 1983. Macron plays tennis but even George H.W. Bush, our last tennis-playing president, could beat him (Donald Trump and Barack Obama are golfers and George W. Bush favors cycling.)

Macron got into a dust-up with Morawiecki because he has an unerring talent for wrong-footed communication, revealed in the way he always says he is for this, but he also for that. For instance, he expressed sympathy for the yellow-vest protesters a couple of years ago, then he told the police to use whatever it took to stop protests that got rowdy, as inevitably they did, then he said that police brutality would not be tolerated, then French crime spiked.

The same thing happened with the Polish politician. The Polish politician asked him a civil question: ‘why are you yak-yakking all the time with Vladimir Putin, what does it get us, or the Ukrainians, yah?’ You have to understand that Morawiecki is right there next to the fighting and the bombing and worries about sending Putin the wrong message. However, Macron is not incorrect to worry about an exit strategy to stop the fighting in the east. He could have said so, but instead, he lashed out by calling Morawjecki an “anti-Semite,” despite there being no Jews in Poland except Adam Michnik and Daniel Pipes. I exaggerate, but you know what I mean.

Macron himself is not given to wild statements, and his attack on Poland’s p.m. was meant as an indirect reminder of Marine Le Pen’s family skeletons without creating a ruckus that might help her late in the campaign simply by drawing attention to her. But it demonstrates his tone-deafness, because it really is Melenchon, as a fellow-traveller, or at least an apologist, for Islamism, who represents a serious anti-Semitic threat.

It is, after all, in neighborhoods where young people are exposed to Islamist propaganda that anti-Jewish murders occur, as happened a week ago in a Parisian suburb. No one is going after Jews because of the skeletons in the Le Pen family closets; and as to Eric Zemmour’s calls for a Catholic revival and the nuances he has expressed about the Vichy regime, these are ideas that have been around a long time and they have met mainly with indifference, and certainly not with calls to kill Jews. (READ MORE: As French Elections Near, Zemmour Loses Support While Le Pen Rises)

What we do know is that there is no love of America lost among any of the right-wingers, whereas Macron, make what you will of his “globalism” and “Brussels elitism” is in the Atlantist tradition. The others were all pro-Putin until they became anti-Putin and — this surely Morawiecki must understand — they never were in a position where they could seek, as any statesman must, a way to limit the risks of nuclear combat.

The French can have their vote and eat it too, for all we care — up to the point at which they produce a government inimical to our national interests. At that point, we have every reason to intervene, as we did during the high points of the Cold War.

The best advice we can give the French at this stage would be: If you are fed up with your political class, we are too. So start with a gastronomic revival and more trophies in tennis. And maybe a military worthy of the Corsican immigrant, Bonaparte, a diplomacy worthy of the defrocked priest, Talleyrand. And a tennis side worthy of the dashing dresser, Lacoste.