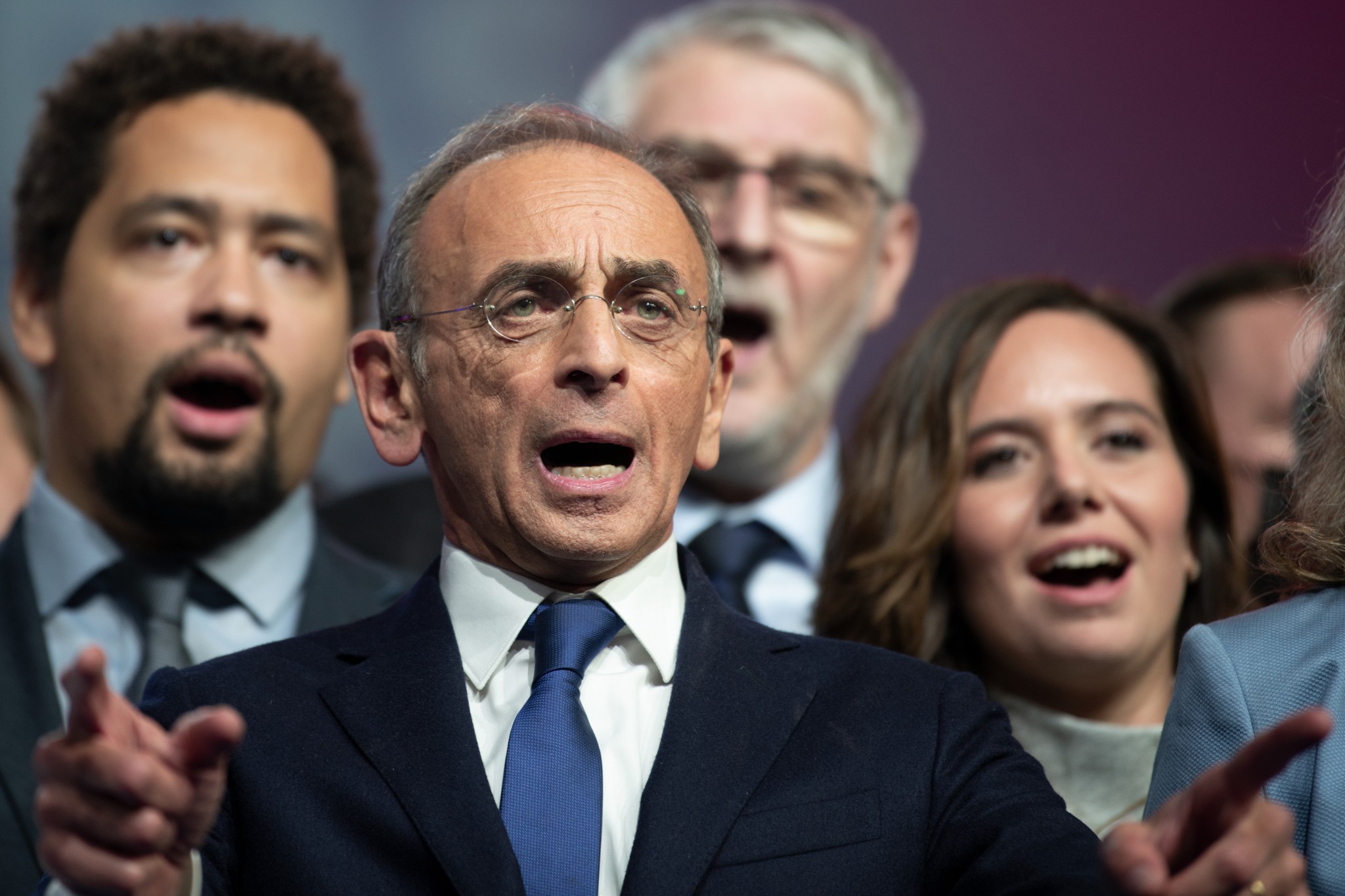 Former pundit Éric Zemmour seems to be on the losing side in the civil war tearing apart the hard-right in France. According to the polls, National Assembly member Marine Le Pen will thrash him in the first round of the presidential elections on April 10.

An unexpected revival of fortune indeed. Late last year, polls predicted that Zemmour had unseated Le Pen as the undisputed leader of the nationalist right. Judging her too “moderate,” too willing to be respectable, and too eager to please the center-right to be a credible nationalist, commentators hailed the fiery Zemmour as her successor.

Polls predicted that he would squarely beat her in the elections, which President Emmanuel Macron is expected to win. Pundits, even in the New York Times, started writing the political obituary of the Le Pen era, which had started in the early ’70s with the foundation of the Front National by Marine’s father, Jean-Marie. One leading light in Le Pen’s party after another jumped ship to Zemmour’s recently founded Reconquête party, among them her niece, the very popular Marion Maréchal, and her spokesman. They were betrayals in the heat of battle that left her reeling, visibly upset, and angry.

However, over the last few weeks, Zemmour’s comfortable lead in the polls ahead of Marine Le Pen has whittled away. She was credited in a poll by Ipsos Sopra Steria Cevipof released Wednesday with 21.5 percent of the vote, coming in second place after Macron, with 26.5 percent. In the previous poll, Le Pen had 17.5 percent support compared to Macron’s 28 percent support. Zemmour, pollsters say, has ended up in the margins, in fourth place, with a paltry 8.5 percent support. Even the far-left wing candidate Jean-Luc Mélenchon is doing better.

Zemmour allowed the mainly hostile French media to depict him as an extremist who is unworthy and unable to govern the nation.

What has gone wrong for Zemmour, and what has propelled Le Pen to possibly her best result in presidential elections? Eric Zemmour, a Jew of Algerian descent, has been unable to shake off his clothes as a fierce polemist and rabble-rouser, harvesting one dubious conviction for “racism” after the other. His efforts to adopt a presidential pose fell flat and the journalistic and polemist demeanor never morphed into a presidential style. His election campaign speeches were barely distinguishable from his articles in which he blasted the Great Replacement of the French people by immigrants from Africa and the Arab world. He lacked in dignity when he gave an opponent the finger and he opposed the arrival of Ukrainian refugees before backtracking. His past comments that he would dream of a “French Putin” came back to haunt him. Keen to exploit this, members of Le Pen’s party, Rassemblement National, chartered a bus to collect Ukrainian refugees at the border with Poland.

Zemmour made the same mistake that cost Le Pen dearly during her two previous failed efforts to become president: allowing the mainly hostile French media to depict him as an extremist who is unworthy and unable to govern the nation. Zemmour’s rallies were sometimes disrupted by violence when his supporters attacked “anti-fascist” demonstrators, giving them the publicity they wanted and the media the opportunity to focus on the riot instead of what Zemmour had to say.

By contrast, Le Pen led a relatively boring campaign. She remained mostly silent on immigration. On that score, she briefly referred to her party’s proposals, which contain, according to the newspaper Le Monde, a blueprint for an “extreme right-wing regime” if and when she comes to power.

Instead, Le Pen concentrated on her unspectacular proposals to defend and improve the “purchasing power” of the French, a subject that Zemmour judges unworthy of him. He is not looking for respectability as he links immigration with terrorism, ordinary crime, the harassment of French women, welfare dependency, and the Islamization of the suburbs where he grew up. His violent tone and his assertion that France is already in a state of civil war put off many French people who otherwise broadly agree with him. People like, until recently, Le Pen, who had unsuccessfully tried to woo him into her campaign team, promising rich rewards in case of victory.

In his campaign for reelection, the civil war on the nationalist right is a gift to the politically elusive Macron. He does not have to have to worry about any serious challenge from the fractious left, which is seen as soft on immigration. The moderate candidates of the right and left are both plagued by defections to his side.

But both hard-right candidates can together muster around 30 percent of the vote next Sunday. It is the only serious challenge to Macron’s reelection in the run-off on April 24.

Macron seems as worried by Le Pen’s rise in the polls as by his steady decline. “Of course Madame Le Pen can win,” his spokesman warned the other day of the woman who had been written off a few weeks earlier.

Rene ter Steege is a Dutch journalist writing on immigration in Europe.