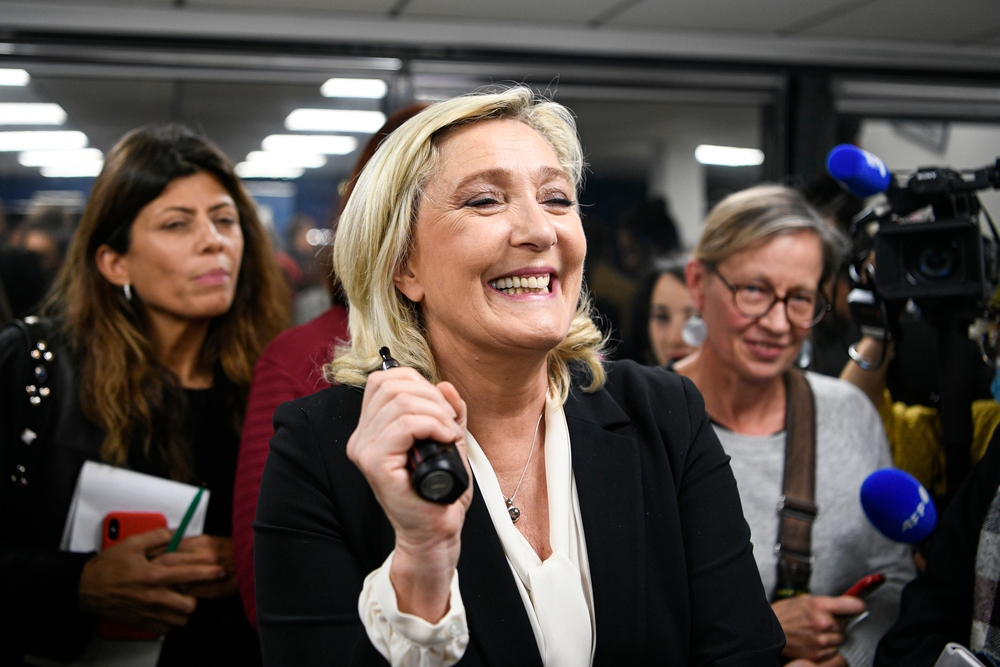 The result of the first round of the presidential election has confronted France with the prospect of power in the hands of Marine Le Pen, the far-right populist leader. She is only two to four points behind President Emmanuel Macron in the lead-up to the second round, a very different scenario from five years ago, when Macron, then an aspiring young leader, defeated Mrs. Le Pen handily.

Mrs. Le Pen, whose father founded her party, the National Rally, in the 1970s, is a typical nationalist who considers the liberal world order and globalization disadvantageous to her country. Her instincts are nationalist and protectionist in everything from the economy to the culture. She profoundly mistrusts immigration and has a penchant for authoritarians of the Putin sort. Conscious that her stance against the European Union (EU) and NATO, and her attraction to the Russian dictator, weighed against her in past presidential elections (this is her third one), she has moderated some of her views; she no longer wants her country to leave the EU and has condemned Putin’s invasion of Ukraine. But she remains highly contemptuous of free markets and globalization, wants to bypass Parliament as much as possible through referenda and other direct appeals to the people, and wants to dish out lots of subsidies to all sorts of groups.

Macron has not been the reformist president he promised he would be, in a country that has been fanatically statist since the days of Jean-Baptiste Colbert, Louis XIV’s first minister, and has the world’s biggest government. (Expenditures amount to more than 60 percent of GDP.) Resistance to proposed market-driven changes has been great, and several crises, from the tumultuous yellow-vest protests to COVID-19 to the invasion of Ukraine, have distracted the current government from a reformist agenda. This is not to mention the price inflation, which is fueling Mrs. Le Pen’s campaign and has various causes, including the European Central Bank’s monetary policy.

The heavy weight of the government means that the budget deficit is currently 6-7 percent, the national debt amounts to 150 percent of GDP, and unemployment, chronically high in this country, is at 8 percent. France is in desperate need of a change. But the kind of change it needs is not on the political agenda. Instead, the institutions of liberal democracy are trying to stem the populist tides, from the left and the right, that have gathered momentum. The first-round vote total for the populist Right (Le Pen and Éric Zemmour, an author and journalist who recently entered politics) and the populist Left (led by radical socialist Jean-Luc Mélenchon) surpassed 50 percent while the two mainstream parties, the center-right Republicans and the Socialist Party, which had governed France for decades, have been reduced to 4.7 percent and 1.7 percent respectively. Some of the voters who supported Mélenchon are inclined to vote for Le Pen, whose discourse, aimed at blue-collar workers, plays on their fear of international competition and immigration.

Although populism has been growing in western Europe, its strongholds are in central and eastern Europe, where liberal democracy has been eroded by authoritarian governments. Hungary’s Viktor Orbán is the poster child for European illiberalism. Radical populism has not been able to win in Europe’s leading countries so far. (The radical Left is, however, a partner in the government of Spain, a country that ranks immediately behind Europe’s top four, Germany, France, the United Kingdom, and Italy). Mrs. Le Pen seems to be closest to achieving precisely that breakthrough.

At this point, though, it looks like Macron will be able to pull it off by a very small margin. But it is by no means a foregone conclusion, and even if he does, the fact that nearly half the electorate is willing to opt for a nationalist-populist candidate almost a quarter into the 21st century is a momentous and sobering commentary on the present state of liberal democracy and globalization in old Europe.

Álvaro Vargas Llosa is a senior fellow of the Independent Institute in Oakland, Calif. His latest book is Global Crossings: Immigration, Civilization, and America.