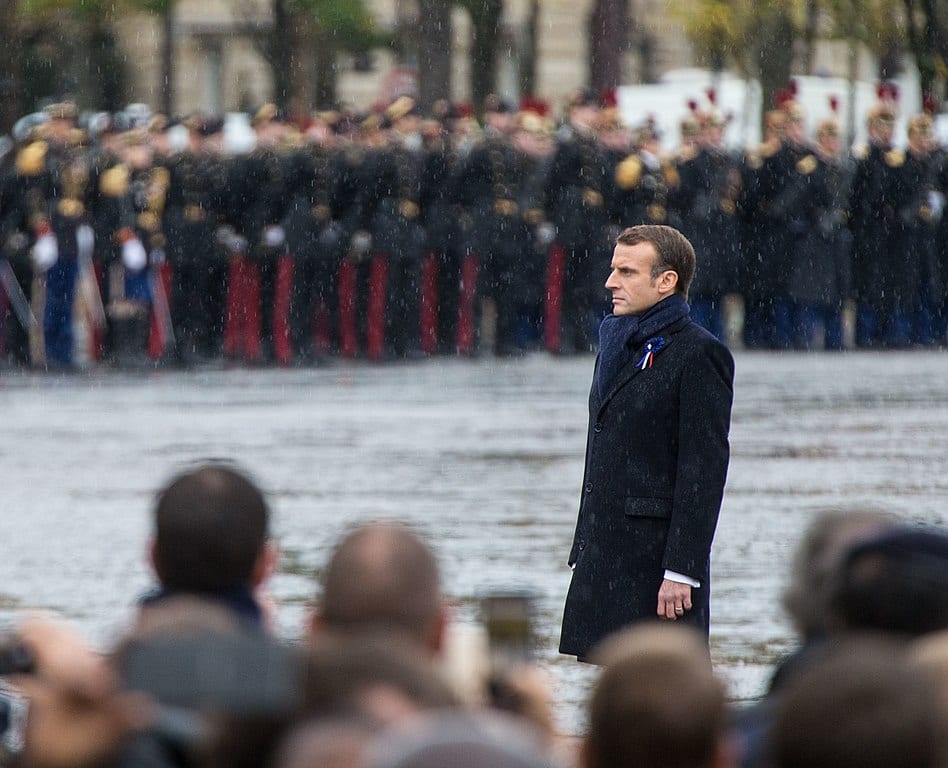 More Politics
Sign Up to receive Our Latest Updates!
Register
Hot Off
The Press
Drawn to Humor
The Bridge of Life
by Patrick Cross
Crime Time
Gov. Newsom, Kevin Cooper Is Guilty
by Debra J. Saunders
Serve and Volley
Rights of Man and Woman Too
by Roger Kaplan
Sunday Report
The Cardinal Marx Charade
by George Neumayr
Cultural Decline
China’s Three-Child Policy and the Philosophy of Reproduction
by Matthew Omolesky

The French are a nation of incorrigible, rebellious frondeurs who resent those in power, whoever they might be. Sometimes the animosity turns viciously violent, as during the Jacquerie uprising of 1358, when overtaxed peasants went on a rampage against the nobility, one of whom they barbecued on a spit. In 1789 they had a new tool, the guillotine, that they used with abandon on Louis XIV, Marie Antoinette, and some 40,000 others. But usually they have been content to mock their leaders more or less good-naturedly.

They accepted the imperious rule of Charles de Gaulle for ten years while calling him Big Charley and rolling their eyes at his Olympian pronouncements. They snickered over François Mitterrand’s keeping a mistress and illegitimate daughter at public expense. They didn’t even feign to take Jacques Chirac seriously, enjoying the jokes about his outsized sexual appetite — “three minutes, shower included.” Nicolas Sarkozy they found risible because of his short stature, his glamorous, top-model wife, and his female-heavy cabinet dubbed the Sarko Babes. François Hollande never recovered his dignity after being photographed sneaking out of the Elysée Palace on a scooter for a midnight tryst. They were all ridiculed, derided, and satirized in the Rabelaisian manner, but they were not actively, viscerally, publicly hated.

That changed with the election of Emmanuel Macron. A 39-year-old former investment banker and economy minister under Hollande who had never held elective office, he was largely an unknown quantity. He came out of nowhere to win the 2016 election by default — he received only 24 percent of the vote in the first round of balloting — when it was found that the favorite, François Fillon, had paid his wife for nonexistent office duties when he was Sarkozy’s prime minister. Claiming to be neither of the right nor the left, he led a children’s crusade of similarly inexperienced young idealists and technocrats hoping for a grassroots approach to reforming sclerotic French society.

They would trim the bloated bureaucracy, abolish the wealth tax that alienated the country’s best and brightest, cut anti-business red tape — and save the planet from climate change while they were at it. “I want to bring France into a new era,” Macron said during his campaign, “so it will get over the debilitating feeling of decline and loss of world-class status.” He was, he suggested, the providential man — his name, after all, means God is with us — who would be the change agent of a historic transformation. Some compared him to John Kennedy. The Economist pictured him walking on water. Adulation prevailed.

With the young members of his Republic on the Move party holding a comfortable majority in the National Assembly, he got off to a flying start, ramming through several key reforms during his first year in office. He revised the crippling, byzantine labor law to free up hiring and firing. He took on the formidable state-run railways (SNCF) and, despite a rolling, months-long strike, streamlined it by reducing job security and cutting some of the employees’ more egregious perks. He scrapped the punitive wealth tax that France, alone in the industrialized world, used to soak the rich, and that had led thousands of well-off Frenchmen to flee their country.

In a land where style is the man, Macron’s style was autocratic, top-down, high-handed. Politically tone-deaf, he eschewed cultivating the old pols who could have shown him how to get results without rubbing people the wrong way. As the months passed, he appeared increasingly arrogant, even disdainful of public opinion. On the rare occasions when he addressed the nation, he spoke the language of the Ecole Nationale d’Administration, that incubator of France’s elite technocrats. His explanations of his policies were so high-flown and esoteric that they were inaudible to most French. He himself termed his style Jupiterian. He was, he said, le maître des horloges, the master of his own time.

When he did attempt the vernacular, it was tinged with contempt for the concerns of ordinary citizens. Discussing France’s welfare-state “social model,” he said, “All those handouts cost a crazy amount of money.” On an official trip to Copenhagen he favorably compared the Danes, “a Lutheran people open to change,” to the French, “Those refractory Gauls who resist it.” When a jobless young man told him of his difficulty in finding work, he shot back, “All you have to do to find a job is cross the street. Plenty of employers are hiring.” One of his cabinet members, reflecting the Jupiterian style, referred to the French as “Those guys who smoke butts and drive diesels.”

Remarks like that stung, but Macron, who seemingly has never understood the heartland French, was oblivious of the impact of his words on public opinion. While France’s unemployment crisis — the worst in Europe at nearly 10 percent — persisted, he traveled the world championing multilateral institutions like the UN and European Union, and, especially, the Paris climate accord. While he fretted publicly about the dangers of global warming, the French were worrying about making ends meet. He worried about the end of the world, they about the end of the month. Macron, they say in the suffering French hinterland, is the rich man’s president.

His poll numbers were already slipping this year when two incidents devastated his presidential image. First, it emerged in July that a bodyguard with whom he had a close relationship had joined riot police in quelling rowdy demonstrators in the May 1st Labor Day parade in Paris. Caught on camera, Alexandre Benalla is shown illegally wearing a police helmet and armband and hitting them with zest. Despite official foot-dragging, it gradually became clear that Benalla held an inexplicably high rank at the Elysée, complete with a 10,000-euro monthly salary, an apartment in an Elysée annex, and fully equipped police car. Given that Macron had plenty of normal police protection without Benalla, that the two were inseparable wherever Macron went, including on vacation, rumors flew that security wasn’t the only service he provided the president. Macron, whose wife is 25 years his senior, only made it worse by declaring, “He has never been my lover.” One cartoon making the rounds showed him in bed addressing a hulking male figure, “Will you wear your policeman’s uniform tonight?”

In September came photos of Macron during an official visit to the island of Saint Martin, which had been hard hit by a tropical hurricane. They showed him in the company of two husky, dusky, ex-jailbird locals who were stripped to the waist. Macron joyfully posed with his face almost pressed against the chest of one, while that worthy insolently gave the finger to the camera. Even the broad-minded French were shocked. Adulation began to turn to contempt.

The backlash against him and his governing style began in earnest in mid-October over the government’s planned rise in fuel taxes and stricter automobile emission standards scheduled for January. Though prettied up with the fancy name of “ecological transition,” it rankled. An obscure singer and accordionist from Brittany posted a video accusing him of regal indifference to the concerns of ordinary Frenchmen. After it surprisingly went viral, a woman in the Paris suburbs launched an online petition denouncing the fuel taxes that attracted over a million signatures. A truck driver created a Facebook page calling for a nationwide protest on November 17, an automobile mechanic suggested everyone don the high-visibility yellow vests normally worn for roadside breakdowns. The Gilet Jaune popular uprising was born. “We want Macron’s head,” one member declared.

Thus began the series of weekend demonstrations that caught the government off-guard and cost France’s economy dearly. The one on November 17, primarily in the provinces, drew nearly 300,000 people who blocked traffic in more than 2,000 locations. With polls showing heavy public support for the spontaneous, leaderless movement, it invaded Paris, where several thousand clashed with police. The December 1 riots were the worst street violence seen in France since the student-union uprising of May-June 1968. But these were far more violent — on December 1, riot police launched some 15,000 tear gas and concussion grenades in a desperate attempt to control the situation, wreathing the Arc de Triomphe in clouds of acrid smoke. The Champs-Elysées and surrounding streets were dotted with burning cars, shop windows of luxury stores like Louis Vuitton were shattered, mostly by vandals infiltrating the peaceful demonstration. “This is worse than anything we could imagine,” admitted a government minister. Macron, typically away in Buenos Aires for a G20 conference, canceled the fuel tax increase on his return.

To be sure, the Gilet Jaune backlash, which shuns established political parties and labor unions, can be seen as part of the anti-government, anti-elite, anti-globalist movements across Western democracies. It is not unlike the Brexiteers in the UK, the Five-Star movement in Italy, the AfD party in Germany or, indeed, the populist groundswell that brought Donald Trump to the White House. But it is peculiarly French in pitting the provinces against Paris, in its determined drive for more income for the underclass — and in its hatred focused on the person of Emmanuel Macron. When he called several mayors to his office to ask about the situation in their towns, one told him, “If you stay on this course, you’ll end up with your head on a pike.”

While Macron is unlikely to resign or dissolve the National Assembly and call new elections, as the Gilet Jaunes are demanding, his agenda for modernizing France — making it more business-friendly, dusting off the 60-year-old constitution, reforming social security pensions — will, at best, be slowed by public resistance. At worst, if everybody from truck drivers to railway workers, farmers to students, decide this is the moment to go on strike as many are threatening, his presidency could be seriously compromised. As it is, nearly 80 percent of the population no longer supports him.

What the Yellow Vests will do next is unclear at this writing. Some are dropping out, but the hard core are planning another demonstration in Paris on Saturday. Support for them is weakening as the French turn their thoughts to Christmas shopping. Macron may have bought some holiday season peace this week with his TV address to the nation, in which he apologized for past “hurtful” comments. He also promised a rise in the minimum wage for certain categories, a tax break for retirees, and the start of a nationwide discussion on the country’s socio-economic problems. (Ironically, these measures will cost the government some 10 billion euros, which will likely have to be financed by more taxes.) But, noting that he avoided mentioning the Gilet Jaune movement by name, most considered it too little and too late. “He’s offering us crumbs,” one said. “We want the whole baguette.”