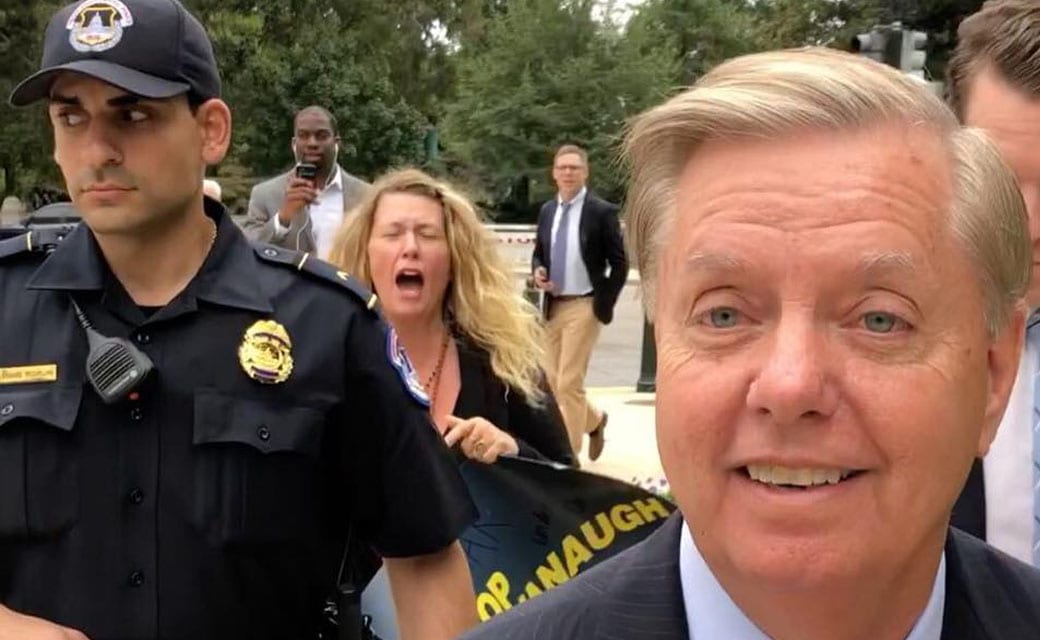 As painful as that is for the Democrat Party and the American Left, it can’t be avoided after Saturday’s 50-48 vote in what might turn out to be the most self-destructive political gambit in the country’s recent history; we’ll know that for sure in a month, when the November midterms have come and gone and the Democrats’ supposed Blue Wave sweeping them back into power on Capitol Hill either happens or (more likely) it doesn’t.

The Democrats had to know they couldn’t stop Kavanaugh’s nomination. To do that would entail getting two Republicans to vote their way and keeping all of their red-state senators in the fold — something that wasn’t going to happen with a mainstream, qualified jurist as the nominee.

Kavanaugh turned out to be a brilliant choice by President Trump — he’s a reliable, if not by reputation rabid, conservative but one who’s very well-respected in Washington and a bit of a crossover choice within the Republican Party given his Bush pedigree (the fight over Kavanaugh has done more to bring NeverTrumpers into the fold than anyone could have imagined). And Kavanaugh’s personal record was so clean that it would take a dive into pure falsehood and insanity in order to derail him.

To which the Democrat Party said, “Hold my beer.”

The campaign to destroy Kavanaugh told us a lot about the Democrats and the Hard Left advocacy groups who control that party. The main lessons fall under five basic truths.

Give the Dems credit, because they did at least try to convince the American people Kavanaugh wasn’t a mainstream jurist first before attempting to smear him with accusations he’s a sexual predator. Where they went wrong was that when the first argument didn’t convince the public and wasn’t persuasive against the Jeff Flakes and Susan Collinses of the world, they neglected to make the best of the situation and use the impending loss of the Kavanaugh fight to motivate their voters.

Somebody atop George Soros’ network of tin pot revolutionaries got together with Tom Perez and legitimate woman abuser Keith Ellison at the DNC, not to mention Chuck Schumer and Dianne Feinstein, and decided, to paraphrase Sen. John Kennedy, to hit bottom and start digging. Drumming up an allegation by a mentally unstable California psychology professor that Kavanaugh had been inappropriate and perhaps abusive during a high school encounter 36 years in the past, and then doubling and tripling down with even less plausible allegations, all the while leaving what looks like a fairly clear paper trail of coordination, is the kind of all-in bluff no credible political operative would say was worth the risk.

But Schumer, Feinstein et al. pushed those chips into the middle, expecting Trump and Kavanaugh would fold. When they didn’t, and when Trump went further and derisively offered a true characterization of Christine Ford’s testimony in a 36-second outburst in a Mississippi campaign appearance the entire political class treated as an unforgivable breach of presidential protocol, it became clear the entire episode was a lost cause.

Even then, the professional Left failed to sound the retreat. Some 567 protesters were arrested at the Capitol in the last three days of the Kavanaugh confirmation process, many for engaging in behavior that normal Americans would regard as evidence of insanity. In a campaign appearance in Kansas, Trump again skewered the Left as “too dangerous and extreme to govern,” which is exactly the characterization the Democrats can’t afford to have the country accept where they’re concerned. And it’s exactly the characterization their antics have lent an air of truth to.

This isn’t just a fun thing I say in this space all the time. It can’t be disputed any more after the Kavanaugh ordeal.

We already know many, if not most, of those protesters at the Capitol were paid; we know this because they admitted as much. And their employers hardly got their money’s worth; other than when a couple of Soros-funded apparatchiks cornered Flake in an elevator and managed to get him to call for an expanded FBI background investigation into the Christine Ford and Deborah Ramirez allegations — something which raised the ire of lots of Republicans but actually ended up being a good idea, as the FBI all but confirmed those allegations were uncorroborated rubbish, building support for Kavanaugh among the nonpolitical and giving Flake, Collins, and West Virginia Democrat Joe Manchin cover to support his confirmation — every time the Democrats’ protesters interacted with Republican Senators they came away looking like abject fools.

But it wasn’t just the protesters who came off looking like unemployable dunces. Consider how the hearings went for the Democrats’ supposed best and brightest. There was Mazie Hirono and her non-stop fact-free tirades about how all the men in America need to shut up, there was “Spartacus” Booker and his inanities too numerous to count, there was the comic irony of “Da Nang Dick” Blumenthal, with his falsus in uno, falsus in omnibus challenge to Kavanaugh after riding a Stolen Valor claim of having served in Vietnam to the Senate in the first place, there was the hard-to-believe interrogation of Kavanaugh about references to farting in his high school yearbook.

These were not indications of people capable of being effective in their jobs. I’ve said it before, but when you embrace intersectional feminism, postmodern identity politics, and socialist economics as the three-legged stool of your political philosophy you’re not going to attract a lot of people grounded in the kind of reality necessary to do objectively good work — and sooner or later it’s going to become obvious that none of your people can make your trains run on time.

This is clear enough without a lot of explanation, no? The Kavanaugh allegations were wholly unsupported by any corroborating evidence at all, something that the Republicans’ hired-gun outside counsel Rachel Mitchell exposed in a highly underrated manner during Christine Ford’s testimony, and at the end of the fact-finding process the Democrats found themselves whining about Kavanaugh’s tone. This after accusing a family man with an impeccable reputation of being a gang rapist, of all things; the effect of which was to put every male — and in particular every straight white male — in America on the defensive with eyes wide open to the threat a hypercynical and loony American Left poses to them when their New Rules migrate out of the academic fever swamps and into the real world.

But it’s worse than that, because the seething hatred for the “patriarchy” doesn’t just scare the bejesus out of the male voters the Dems used to be able to call upon to make a majority — what we’re seeing is it might even have a more corrosive effect on married women who have husbands and sons, and it’s not very helpful among black and Hispanic voters, either.

The people who used to run the Democrat Party could have told them running out with “Believe All Women” was a bad idea, and not just because it makes Bill Clinton look like a rapist; it also recalls similar sentiments used to justify the lynch mobs of Scottsboro, Alabama and Money, Mississippi. And no, switching from railroading black men to railroading white ones doesn’t help the situation.

At Powerline and other sites there has been a good discussion of the “Grievance Studies” scandal, in which three self-described “left-leaning liberal” academics submitted a raft of papers for peer review in a number of social science journals which were purposely filled with patent absurdities, and had five of them published — including, hilariously enough, a 3,000 word excerpt of Adolf Hitler’s Mein Kampf, rewritten in the language of Intersectionality theory and published in the Gender Studies journal Affilia.

Nobody is particularly surprised at the scandal, as the declining quality of left-wing scholarship is quite well known. What the Kavanaugh hearings indicated was that the idiotic thought processes which created the Grievance Studies scandal are alive and well in the top echelons of the Democrat Party. If this weren’t true you wouldn’t see senators like Hirono and Chris Coons intone against the presumption of innocence in the Kavanaugh case. Their justification for such insane statements were that the hearings were merely a job interview — a poor attempt, to be sure, given that the Senate’s advise and consent function is a constitutional act and to disparage one of the most fundamental rights in American jurisprudence amid that process is a prima facie abuse, and also because any corporate recruiter will tell you no employer much cares about what a 51-year-old job candidate did in high school.

That’s a paraphrase of a quote James Carville, Clinton’s ethically-challenged political consultant, offered up about trailer parks amid the former president’s many “bimbo eruptions,” but it’s become an unmistakable characteristic of the Democrats’ politics of late. After all, it’s clear Christine Ford was recruited to produce her allegation against Kavanaugh — as time goes by we’re going to find out more about the roles Monica McLean and David Laufman, formerly of the FBI, played in producing Ford’s allegations in concert with Schumer and Feinstein.

In any other profession, the risk to Ford’s career from going national with a clearly false allegation against a Supreme Court nominee would be fatal to future job prospects. But Ford is an academic at Palo Alto University in California, and nobody seriously believes she’ll suffer from it. After all, Anita Hill didn’t.

And if you can’t find a huckleberry in the left-wing monopolized universities, there’s always the unionized state and governmental bureaucracy which doesn’t exactly tolerate a panoply of differing political views. Let’s remember that Ramirez and Julie Swetnik, whose allegations about Kavanaugh were nothing short of farcical, were government bureaucrats at least at some point in their careers (as were McLean and Laufman); there might be even less sanction against liars among the Deep State than on campus.