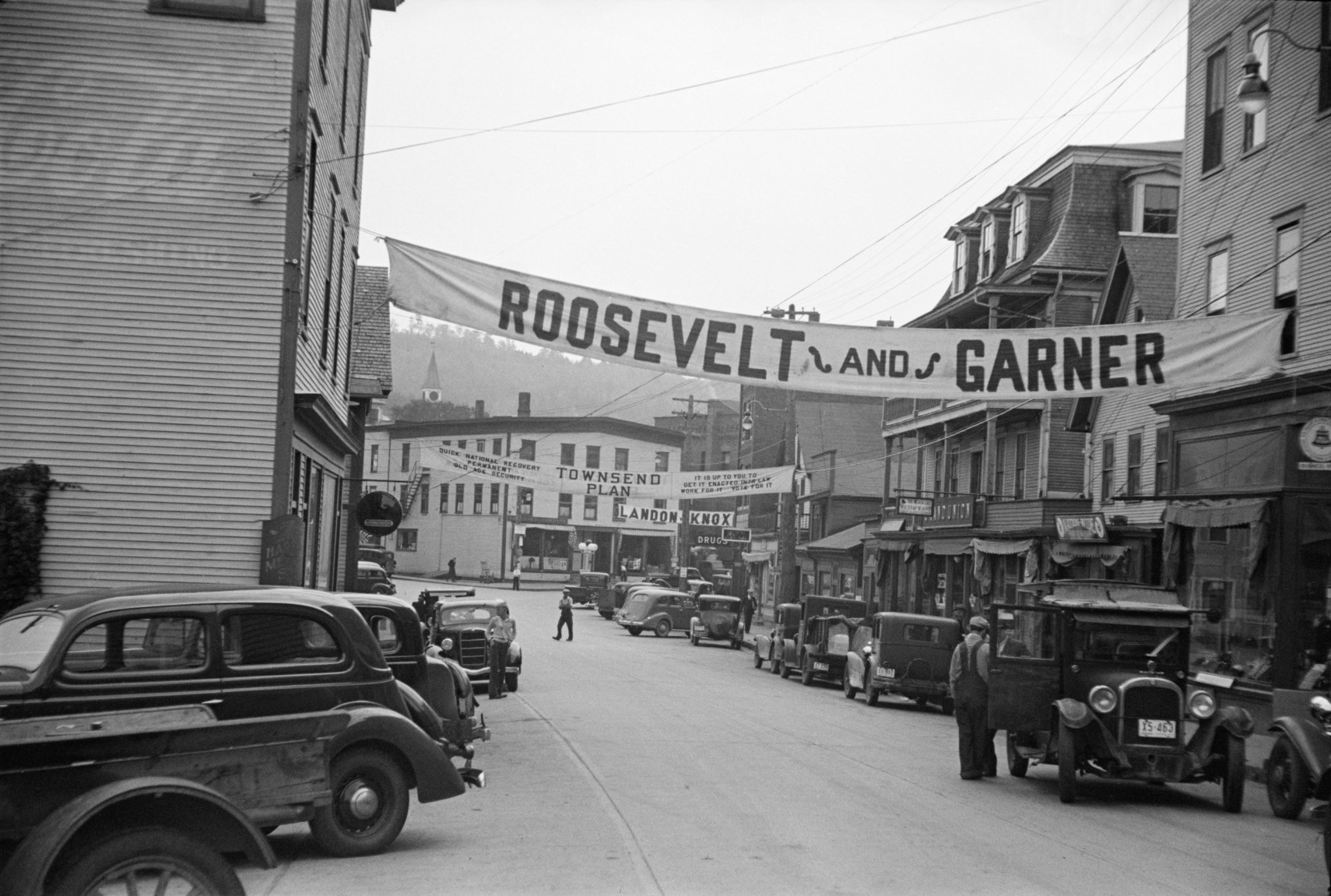 A brouhaha has erupted over President Donald Trump’s decision to forward a Supreme Court justice nominee to the Senate for confirmation. Democrats have threatened to pack the court if Democrats capture both the White House and the Senate in November. This would be the second such attempt in that past century. Eight decades ago, Democratic President Franklin Roosevelt attempted to pack the Supreme Court in retaliation for justices unanimously finding many of his programs unconstitutional.

Roosevelt’s attacks on the Supreme Court became so unnerving that all nine justices, conservatives and liberals alike, boycotted his 1936 State of the Union address.

When Roosevelt was elected president in 1932, he was joined by a super-majority of Democrats in each chamber of Congress. Democrats (including Farm-Labor Party and Progressive Representatives who caucused with the Democratic Party) held a 60–36 advantage in the Senate and an even more stunning 318–117 majority in the House from 1933–1935. Two years later, Democratic majorities increased to 70–25 in the Senate and 332–103 in the House.

These super-majorities made it very easy to enact the many programs associated with Roosevelt’s New Deal. Roosevelt’s theory, endorsed by Democratic majorities in Congress, was that government should be managing the economy instead of the free market, and that there should be a centralization of power in the presidency. The executive branch made proposals, which the legislative branch passed without any hesitation. However, the third branch of government also had a say.

The Supreme Court faced an astonishing number of court challenges to Roosevelt’s New Deal programs. The high court ruled many of these programs unconstitutional. On May 27, 1935, the Supreme Court struck down Roosevelt’s key construct, the National Industrial Recovery Act, on a day some referred to as “Black Monday.” It was not even a squeaker of a case. The court unanimously declared unconstitutional “not just the program but its entire system of minimum wages, maximum hours, and workers’ rights.”

The National Industrial Recovery Act was one of three significant court defeats that were announced on Black Monday. Roosevelt lost other cases both before and after Black Monday, in which Congress either ceded too much authority to the executive branch or allowed government to encroach on individual rights and economic freedoms.

During Roosevelt’s first term, the court also struck down as unconstitutional the Agricultural Adjustment, Guffey Coal, Railroad Retirement, and Bituminous Coal Conservation Acts. Never before had so many unconstitutional laws been struck down so quickly. Even reliably liberal Supreme Court Justice Louis Brandeis voted against sacred Roosevelt programs. He privately told Roosevelt aides: “Go back and tell the president that we’re not going to let this government centralize everything. It’s come to an end.” Roosevelt and Congress were enacting new programs at a phenomenal rate, matched only by the rate at which the judicial branch found them in violation of the Constitution.

During Roosevelt’s first term, the high court overturned Roosevelt-backed laws at ten times the traditional rate. By the end of 1935, Roosevelt was concerned that nearly all of his New Deal legislation would be found unconstitutional. His attacks on the Supreme Court became so unnerving that all nine justices, conservatives and liberals alike, boycotted his 1936 State of the Union address.

Roosevelt breezed through his 1936 reelection with ease. Not only was he returned to the White House for a second presidential term, but he was also the beneficiary of increased Democratic majorities. The majorities were so lopsided that it was as if there was not a single Republican in all of Congress. Democrats held a 79–17 edge in the Senate and a 347–88 majority in the House.

In the lame duck period between election day and inauguration day, Roosevelt formalized a scheme that would effectively eliminate the judicial branch as an impediment to his plans. His closest political confidants were aghast when they learned of his plan.

Author Jeff Shesol described the reaction of Roosevelt’s senior staff when the 32nd president revealed his intentions to remake the Supreme Court:

In January 1937, the president began to inform several top advisers about his plan. All were astounded; some were distraught. One senior counselor reacted with “extreme political fear and shock,” confessing to a colleague he was “scared to death.” What terrified him was precisely what delighted Roosevelt: the artfulness, the deviousness of making the case against the Court one of infirmity rather than ideology. When the cloak came off — as the president’s men expected it would — Roosevelt’s motives would stand exposed and integrity, they feared, would be in tatters.

When Roosevelt’s plan became public, his political opponents accused him of pursuing “dictatorial powers, and compared him to Machiavelli, Stalin, Hitler, [and] Mussolini…. Even Vice President Garner held his nose and turned thumbs down” on Roosevelt’s proposal. It was telling that the German and Italian press wrote that Roosevelt’s intentions were similar to the actions of their autocratic leaders. The Nazi and Fascist governments ruled Germany and Italy, respectively, when German and Italian newspapers were praising Roosevelt’s intentions.

Roosevelt’s scheme was to introduce legislation that would enable him to appoint one new justice up to six for every current justice who reached the age of seventy and had not retired. This would allow him to immediately appoint six. Roosevelt expected both chambers of Congress to rubber-stamp his bill as they had with all of his other programs. Next, Roosevelt would nominate lackeys to the court who would support all of his programs. Roosevelt was confident the seventy-nine Democrats in the Senate would confirm all of his nominees without question.

At least that was Roosevelt’s plan.

The U.S. Constitution never specified the number of justices on the Supreme Court. The number of justices on the high court had fluctuated since the nation’s founding. There were six justices during the Supreme Court’s very first term and ten justices in the midst of the Civil War. In the 19th century, the Judiciary Act of 1869 was passed into law. Among other provisions regarding circuit courts, the law stipulated there to be a chief justice and eight associate justices. For nearly seventy years until Roosevelt hatched his scheme, this was the precedent.

Roosevelt wanted to have fifteen justices on the court. This, he thought, would guarantee him a loyal panel of justices who would ignore constitutional restrictions. He quickly abandoned an earlier plan. Late in his first term, Roosevelt contemplated a constitutional amendment that would render the Supreme Court ineffective. However, he realized he did not have the public support to get such an amendment ratified.

Roosevelt announced his bill, the Judicial Procedures Reform Bill of 1937, in early February 1937. As is custom, he requested the House to first take up consideration of his proposal. Up until this point, Roosevelt had enjoyed an incurious Democratic majority that quickly approved one program after another. However, Roosevelt misjudged the House reaction this time.

The first error committed by Roosevelt was that he never consulted House leaders, as was customary when the executive branch wanted to introduce legislation. House leaders were as surprised as the public. The second error was that Roosevelt never considered House Democrats’ fidelity to the Constitution. They were more loyal to the constitutional construct of three separate but equal branches of government than they were to the titular head of the Democratic Party. Roosevelt’s bill was not going to move in the House.

The Senate was approached next. In Senate hearings, administration witnesses testified that the current justices were too old to do their jobs, they were overworked, and, most critically, new justices were needed to rule favorably on New Deal programs. However, the Senate was not in favor of dramatically changing the court’s makeup any more than the House. Even Democratic Senator Burton Wheeler of Montana, who was the first Senator to endorse Roosevelt’s candidacy, called the court packing scheme “sham reform.”

Roosevelt tried to rally public support for his proposal to change the Supreme Court by speaking directly to the public during one of his radio addresses, known as fireside chats. In spite of his immense popularity, Roosevelt did not have any success. Polling showed the public was consistently opposed to his court-packing proposal. Ad hoc groups were springing up around the country opposed to remaking the Supreme Court. Even Vice President John Garner opposed Roosevelt’s scheme.

In June 1937, the Senate Judiciary Committee voted down the bill and delivered sharp criticism of the proposal, calling it “a needless, futile, and utterly dangerous abandonment of constitutional principle.”

Still, the committee sent the bill to the full Senate for consideration. Roosevelt was still confident he could get his bill passed in the Senate. Senate Majority Leader Joseph Robinson had blind loyalty to Roosevelt. It no doubt helped that Roosevelt promised to appoint Robinson to the Supreme Court upon the first vacancy. It was a promise Roosevelt had no intention of keeping. Unfortunately for Roosevelt’s plan, Robinson died before he could marshal enough votes to pass the bill. The legislation was soundly defeated on the Senate floor by a 70 to 20 vote.

Ironically, Roosevelt essentially got what he wanted in 1944 before dying in office in the following year. Seven of the nine justices that were on the court when Roosevelt was first elected either retired or passed away. This allowed Roosevelt to appoint jurists who would unquestionably endorse his programs, regardless of constitutional concerns.

Mark Hyman is an Emmy Award-winning investigative television journalist. This essay was adapted from Washington Babylon: From George Washington to Donald Trump, Scandals That Rocked the Nation, on sale everywhere. Follow Mark on Twitter and Parler at @MarkHyman.