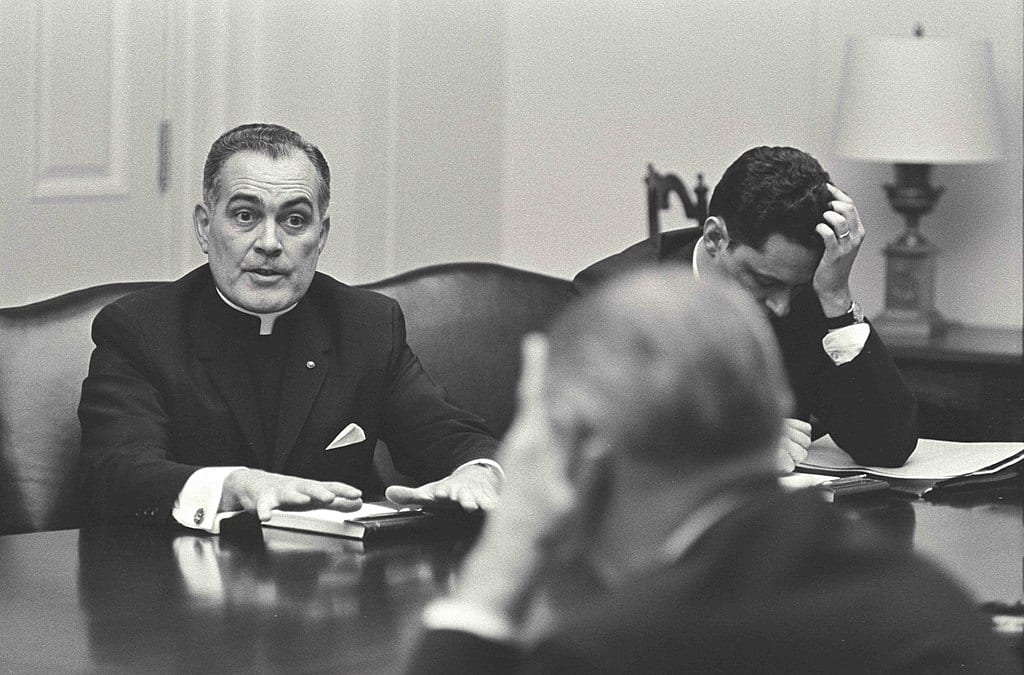 Father Wilson D. (“Bill”) Miscamble has authored a 400-page biography, American Priest: The Ambitious Life And Conflicted Legacy of Notre Dame’s Father Ted Hesburgh. Catholic Hesburgh, born in 1917 a few days apart from Catholic John F. Kennedy, had the same ambition — to aspire to be the best, and to be accepted by the American public and establishment. Both men had achieved this goal by 1960.

It can be difficult in 2019 to bring to mind the world in which both men grew up. It was an America in which the WASP establishment (WASP is a term very rarely used these days; it means “White Anglo-Saxon Protestant”) had long discriminated in education (and jobs, etc.) against Catholics, Italians, Irish, Poles, Germans, Hispanics, Jews, Asians and African-Americans. Fr. Hesburgh’s long and broad acceptance by the public and establishment, his public service to the country he loved, started with his appointment by President Eisenhower in 1954, at age 37, to the National Science Board. Ultimately, he was appointed by nine presidents 16 times between 1954 and 2001. He appeared on the cover of Time(1962), LBJ awarded him the Presidential Medal of Freedom (1964), Congress awarded him its Gold Medal (2000), his portrait is in the National Portrait Gallery (2007), and he appeared on a postage stamp (2017).

Fr. Hesburgh’s 35-year tenure as president of the University of Notre Dame (1952-1987) and a life of 97 years (1917-2015), makes researching a biography daunting. The “essential basis” of this book are 30 hours of Fr. Miscamble’s interviews of the subject in June 1998. Miscamble had come to Notre Dame from Australia in 1976 for a doctorate in history, had entered Fr. Hesburgh’s religious Order (Holy Cross/CSC) in 1982, and had joined the history faculty at Notre Dame in 1988. He was chair of the History Department when he obtained Hesburgh’s consent in 1994 to a biography that would offer a critical evaluation of his life. His critical evaluation is not like the accolades Hesburgh received upon his retirement or upon his death or in the current 100-minute documentary film Hesburgh (showing, for example, May 3-9, in D.C. at AMC Georgetown).

Somehow he had navigated Notre Dame through the student and sexual revolutions, the divisions over the Vietnam War, the challenges to authority of all sorts including within the university, the widespread disillusionment with most social and political institutions, and the upheaval in the [post-Vatican II] Catholic Church. It surely must be judged a bravura performance and one not equaled by any of his contemporaries. That he did this while maintaining a full range of outside involvements including with the [International Federal of Catholic Universities], the Civil Rights Commission, and the Rockefeller Foundation only adds to the virtuoso quality of his accomplishment.

I add the observation that, when other universities were shedding ROTC during the tumultuous campus unrest associated with the Vietnam War, Fr. Hesburgh kept all three branches of ROTC: at a high of 1,600 students in the late ’60s; and a low, but significant number, of 442 in 1974. Moreover, Notre Dame played all three service academies in football in 1969 and 1973, two in ’70 and ’72, and Navy every year.

The title of the book reflects Fr. Miscamble’s findings that Fr. Hesburgh provided a “conflicted legacy” for a university that holds itself out as Catholic. While Fr. Hesburgh aspired from day one of his presidency to make Notre Dame a great, indeed the greatest, Catholic university in the modern (that is, post-medieval) era, Fr. Miscamble describes in detail Fr. Hesburgh’s estrangement from Pope Paul VI and from Pope John Paul II. Furthermore, Fr. Hesburgh paid no attention to the undergraduate curriculum while those he appointed eroded its Catholic content and he failed to ensure that the faculty would support the university’s Catholic mission. Fr. Miscamble dissects Fr. Hesburgh’s leading role in promulgating two documents, both in 1967. One established the independence of the university from the religious Order that had founded it 125 years earlier in 1842. The other was the “Land o’ Lakes Statement” issued by a small group of Catholic university leaders he gathered at that university-owned site which asserted the independence of all American Catholic universities from their Catholic bishops (the hierarchy). (He did the same for all Catholic universities worldwide in the 1972 The Catholic University in the Modern World issued by the International Federation of Catholic Universities (of which he was chair, 1963-70).)

In the second half, Fr. Miscamble puts Fr. Hesburgh’s various roles off campus in historical context and describes the relationships he had with many people, including our presidents. He assesses Fr. Hesburgh’s effectiveness in his roles. (I mean his effectiveness in the work at hand. Hesburgh was always effective in networking to the benefit of his reputation and that of the university.) Of Fr. Hesburgh’s many off-campus activities, I count 14 (with the Civil Rights Commission being three of them) that Fr. Miscamble evaluated which involved service to the United States. (For the sake of limiting the scope of this essay, I am not including such activities as serving as founding co-chair of the Knight Commission on Intercollegiate Athletics (1989-2001), member, and chair, of Board of Overseers of Harvard (1990-1996), and Catholic Church activities.) Here’s my recapitulation of Fr. Miscamble’s analysis. I provide the number of board or commission numbers because it seems to me Fr. Hesburgh did better with smaller groups. But then who wouldn’t?

Hesburgh believed that university presidents, and universities, should be involved in the great issues of the day, as he was with civil rights, science, immigration, the environment, ecumenism, nuclear disarmament, amnesty, election monitoring, and more (but not abortion). The current generation of university presidents, private and public, should be able to draw much inspiration from Fr. Hesburgh’s life.

Fr. Hesburgh was always a priest. Always wore his Roman collar. Always gathered people together. One of the most amazing stories Fr. Miscamble tells is when Vice President-Elect Nixon asked to attend the USC-Notre Dame game, November, 1952. Fr. Hesburgh hosted. After the afternoon game was over, Fr. Hesburgh spent some hours with him and his wife. Fr. Hesburgh asked him if he had ever seen a confessional. Since he hadn’t, Fr. Hesburgh invited him to walk over to the church (adjacent to the building in which they were conversing) where he showed him a confessional and invited Nixon to enter, and then to kneel, while Fr. Hesburgh, sitting in the booth used by priests, explained the process of Confession. No doubt, Nixon was more acquainted with Catholicism after that one conversation with Fr. Hesburgh than President Clinton was in four years at Georgetown.

Fr. Hesburgh said Mass daily wherever he was, inviting whomever he was with, including Soviet officials, to attend. He was always pastoral. Here’s my favorite example: You will recall that, on December 5, 2018, former President George W. Bush movingly eulogized his father, speaking of his fatherhood. It is no wonder that a quote of Fr. Hesburgh resonated with his father. When then-President George H.W. Bush delivered the commencement address at Notre Dame in May, 1992, he used it. I have not yet found a report of it earlier than a January 1963 issue of the Reader’s Digest: A married man, a student or alumnus, asked Father Hesburgh what was the greatest gift he could give his children. Father replied, “Love their mother.”