by Ellie Gardey
Eric Adams speaks at “Mothers for Eric Adams” rally on 155th Street and Broadway, May 29, 2021 (Lev Radin/Shutterstock.com) 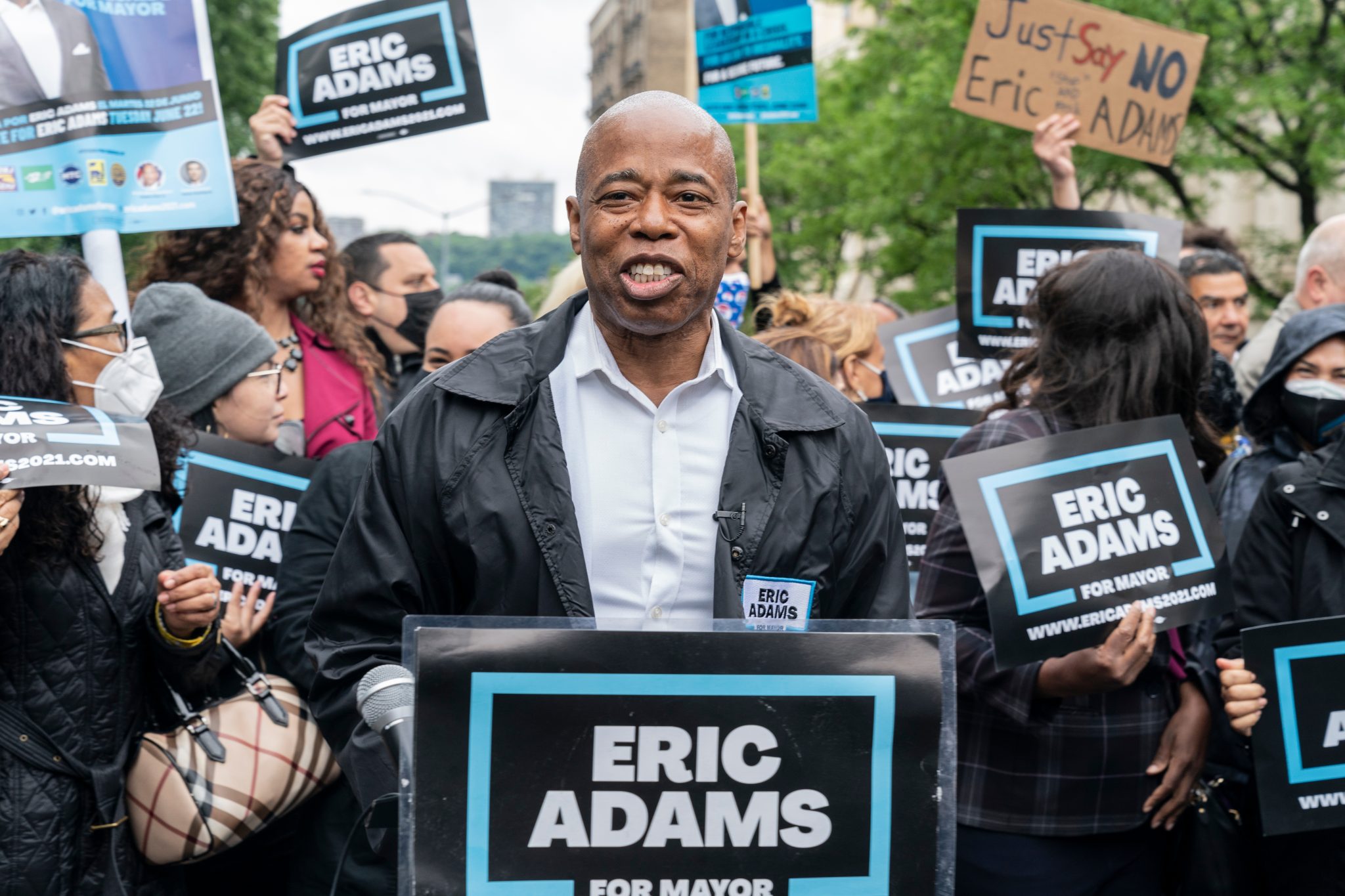 The campaign for New York City mayor is getting mired in identity politics ahead of the Tuesday primaries, as the leading Democratic candidate, Bronx Borough President Eric Adams, fires out accusations of racism against his opponents.

On Saturday, two of Adams’ leading opponents, former presidential candidate Andrew Yang and former sanitation commissioner Kathryn Garcia, campaigned together in an effort to weaken Adams, the front-runner in the polls.

Since the New York City mayoral race will be conducted by ranked-choice voting for the first time, this cooperation is aimed at encouraging supporters to rank both Yang and Garcia in an effort to freeze out Adams. Yang explicitly encouraged his supporters to rank Garcia second behind him, while Garcia refrained from doing so.

Adams responded to Yang and Garcia’s teamwork by alleging it is racist.

“For them to come together like they are doing in the last three days,” Adams said on Saturday, “they’re saying we can’t trust a person of color to be the mayor of the City of New York when this city is overwhelmingly people of color.”

Yang responded, “I would tell Eric Adams that I’ve been Asian my entire life.”

Adams then clarified that he thinks Garcia and Yang intend to block a black or Latino person from becoming mayor. Adams was perhaps echoing the common progressive perspective that certain minority groups, especially African Americans, face greater racial oppression than other racial groups, like Asian Americans.

Yang has attacked Adams throughout the campaign, casting him as corrupt and criticizing the political “machine” behind him.

Adams has not backed down from his accusations of racism against Yang and Garcia. Rather, he has cranked up the heat.

On Sunday, he alleged that it was racially insensitive for Yang and Garcia to campaign together on Juneteenth, the new federal holiday celebrating the emancipation of slaves in the United States.

“While we were celebrating liberation and freedom from enslavement they sent a message and I thought it was the wrong message to send,” he said.

“Where people are talking about, ‘How do we lift up Black and brown people in the city as well as all New Yorkers,’ that was their symbol on June 19th, on the federal holiday,” he said. “So I have a problem with that.”

The “symbol” Adams refers to is Yang, an Asian man, and Garcia, a white woman, campaigning together.

And Ashley Sharpton, a civil rights activist and the daughter of Al Sharpton, said, “This is a cynical attempt by Garcia and Yang to disenfranchise Black voters.”

On Monday, Adams appeared on Fox 5 New York and invoked Jim Crow to describe Yang and Garcia’s collaboration: “We know America’s dark past, everything from poll taxes to how we stopped the voting we’ve seen across the country. Many people felt this was symbolic of that.”

She told reporters at a campaign event Sunday, “I will never play the race card lightly unless I see racism and I’m not calling this racism.” She added, “I believe that ranked-choice voting is better for democracy, period, whoever people vote for.”

On Monday, Wiley released a statement that said, “At a time when this country is seeing real voter suppression laws being enacted, using racism charges to undermine confidence in Ranked Choice Voting is cynical, self-interested and dangerous.”

This is not the first time Adams has accused Yang of racism.

Yang has alleged that Adams actually lives in a New Jersey apartment he co-owns with his girlfriend and not in the Bronx basement he claims is his primary residence.

On June 11, Adams responded to this accusation: “How dare Andrew Yang say a retired captain, a state senator, a borough president, significant other is an educator, we can’t have two homes?”

“He has two homes,” Adams said in reference to Yang’s New York vacation home. “So you don’t see the hint of racism in that I can’t have two homes?”

On Monday, Adams again attacked Yang when speaking to reporters: “Andrew Yang is a liar, he’s a fraud.”

For his part, Yang said Monday that the “last thing New York City needs is a mayor who uses race-baiting any time he is criticized.”