by Melissa Mackenzie
Protest in Miami, Florida, May 31, 2020 (Tverdokhlib/Shutterstock.com) 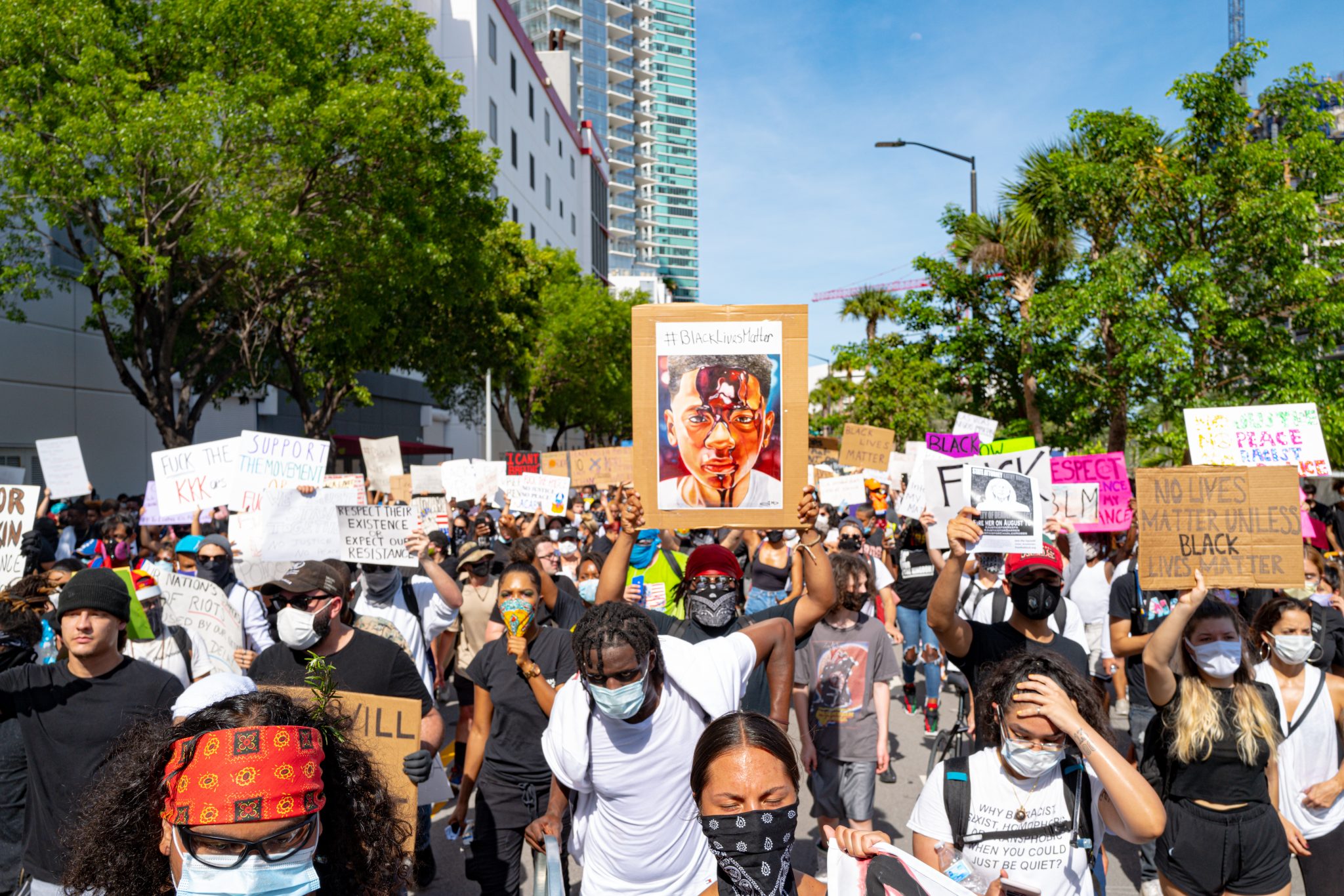 It’s time to shut down the shutdown, everywhere and for all the things. It’s done. Over. If people can be trusted to march with 100,000 of their best friends and scream chants, they can be trusted to wear a mask and go to church, visit their elderly relatives, hold funerals, be with sick loved ones in the hospital, go shopping for clothes, play at playgrounds, and go anywhere.

As irritated readers of The American Spectator will gladly tell you, I wrote worriedly (or, as commenters said, fear-mongered) about the Wuhan Flu months ago and considered it a grave threat. Even I didn’t expect over 100,000 deaths. For reasons that are still not understood, the virus seems particularly bad for certain people beyond the obviously targeted elderly and infirm. Is it genetics? Possibly. Is it a more virulent strain? Possibly. Are there hidden co-factors still not understood? Who knows? While most people ages 50 years and younger do well, some do not. And of those, some fare particularly poorly. Those 50 years and older are in a tougher spot. If they’re healthy, they likely have nothing to worry about.

Enough. The American people know the risks now. Let them decide for themselves how much exposure to a deadly virus they feel comfortable with.

The disease is not the flu even if it has flu-level morbidity (that’s not established yet). And unlike the flu, it can leave permanent damage. The virus destroys the lungs of some of the sufferers, and there is no vaccine or cure. Treatments are elusive. There will be more deaths especially after the spikes from people getting sick after protesting.

Even as I believe the initial two-week shutdown saved lives in some places and certainly bent the curve and spared health resources, the shutdowns in the worst places like New York City were absurd. To this day, the subway was never stopped, and that was a vector for spreading the disease. Flights continued in and out of New York, despite seeding the virus everywhere. Gov. Cuomo forced the most fragile into nursing homes, killing thousands needlessly. It took until May 18 to even clean the subway. This was horrible, horrible public policy in the most densely populated American city. Worst of all, people shut at home had a higher infection rate than essential workers! All this and the economy of New York was wrecked. People were penned like animals in cages and have acted like them when they’ve broken out. And in the midst of this slow-rolling travesty, the media praised Gov. Cuomo, whose only successes during the pandemic were deceptive media hits and pithy news conferences.

The media coverage was and continues to be entirely politically motivated. Outcomes be damned, media and health-care experts are keen to see people die in red states to prove themselves right. Based on the coverage of Georgia, Alabama, Texas, and Arizona this week, one could be forgiven for thinking that these states are dens of death and that hospitals are overrun. Neither sentiment is true. While they are certainly bumps in infections, they must be put into perspective. For example:

Is it surprising that Texas numbers are so low? Even if the state’s death rate doubled, or, put the sensationalistic media’s way, had a 100 percent increase in deaths next month (it won’t), it would still only have 14 deaths per 100,000 people, while New York (and that’s the whole state) would still have over 150 deaths per 100,000. In New York City, the number of deaths per 100,000 is 207. Among those 75 and older, the death rate is 1,550 per 100,000. So the media helps the distortion and attempts to bully governors who have done the right thing into changing course to serve their own ends.

The solution to the vituperation? Ignore it and move forward. Stop the shutdown. The country should be 100 percent opened up, COVID-19 be damned.

The risks of a closed-down country far outweigh the benefits. The pent-up frustration … well, America is roiled not only because of the George Floyd killing but also because there is literally nothing else to do but walk in the streets. No sports. No new entertainment. No jobs. No marathons. No nothing.

It is more than that, though. The governments around the country are using the shutdown to persecute those whom they dislike. The worst and most obvious example is Bill de Blasio marching through New York streets while telling government workers to weld shut the gates to a park frequented by Jewish children. Is de Blasio anti-Semitic, or does he just hate constituents who dislike him? Either way, his practice is discriminatory and should be stopped. Evidently, police came and reopened the park because de Blasio was countervailing an edict from Gov. Cuomo.

Below are lists of activities allowed in various states. The rules and regulations are entirely arbitrary. The actions allowed and disallowed are often contradictory.

One might think that the rules and regulations are commensurate with some scientific standard. No. They’re capricious. There is no scientific standard, really. There can’t be because so little is known about COVID-19. The rules seem designed to punish law-abiding citizens.

But the point isn’t the rules by now. The point is control. It’s not about health or safety or respecting neighbors. It’s about obedience. Americans were exceedingly obedient. Shockingly so. They stopped everything because they cared. They were afraid. They wanted to slow the spread and bend the curve. They did all that, and the government and media and scientific community betrayed that trust in myriad ways.

Dr. Fauci recently admitted that the original circumlocution about mask-wearing was a purposeful lie to make sure health-care workers had enough masks. Instead of trusting the American people, the leading virus expert deceived the American people. Now, people refuse to wear masks because they don’t believe the new recommendation of wearing one matters or even works. The media is appalled by such reckless disregard when they spread the falsehood, many knowing it was garbage.

The media aired hours of “mostly peaceful” protests and riots and failed to rebuke the n’er-do-wells and do-gooders for their lack of mask discipline. President Trump announces a rally in Oklahoma (and if he’s smart, he’ll hand out thousands of Trump masks), and the talking heads can’t stop kvetching about the gross irresponsibility.

One of the most dismaying outcomes of the government response to COVID-19 has been the revelation that scientists cannot be trusted to operate in good faith. On Twitter, I created a list of public health “experts” and was appalled by their fabrications and distortions. For example, the horrendously contrived “research” on the use of hydroxychloroquine resulted in a study widely trumpeted by the media but it was obvious bunk. I’ve dug into the research on this drug and can tell you that most of the studies are too preliminary, too small, not controlled, and generally useless. Once President Trump mentioned potential benefits based on a small French study and anecdotal evidence, the leftist academics were off to the races to prove he was an idiot. Monday, the FDA removed the permission to treat COVID-19 with the anti-malarial drug, but it can be used off-label. Trials for using it to treat COVID-19 are ongoing. Well-constructed studies need to be finished to know for sure.

The most obvious, and odious, disregard for public health has been the aforementioned marches and riots, where few public health officials decried the threat to their fellow citizens and many, many of the churchiest of church lady scientific demagogues overtly encouraged the supposedly antisocial behavior. Often, they professed horror at others going to church or school or, absurdly, a playground to socialize on the same day they lauded marchers.

Enough. The American people know the risks now. Let them decide for themselves how much exposure to a deadly virus they feel comfortable with. Let all businesses open. Let all people wear masks — or not.

But, you might say, that’s risky and selfish! Really? It’s far too late to make that argument. The only argument now is what risks individuals feel comfortable making. Americans who want to run their gyms or hair salons or churches should be in open revolt if their states haven’t already opened up. Let people live and make a living.

Let people mask up when they feel at risk. Continue the hygiene that probably should have been in place all along. It shouldn’t have taken a pandemic for restaurants and salons to take personal hygiene seriously.

This coercive, controlling, economy-strangling, life-thwarting madness needs to end. Should the American public ever submit to a shutdown again? Not a forced one. Let business owners and individuals assess risks and decide for themselves. Government experts cannot, and should not, be trusted.