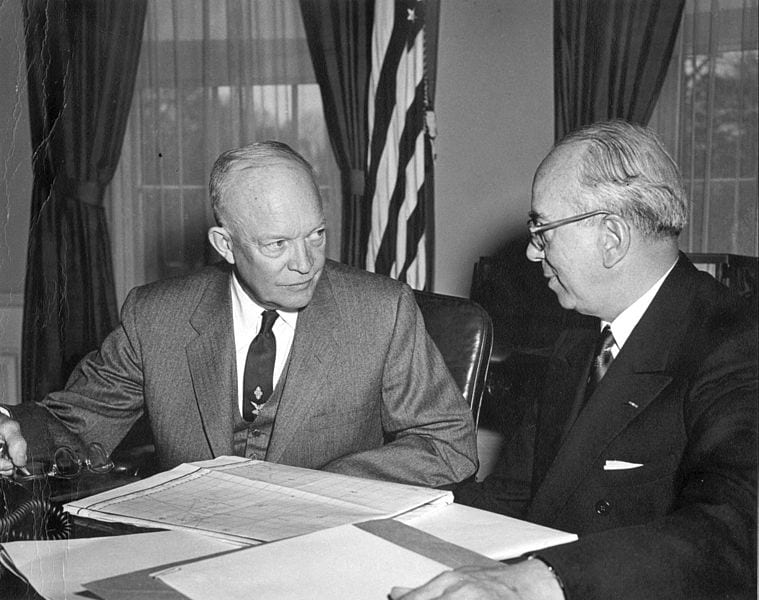 The Democrats and the media tell us that midterm history portends large Republican losses in November. This factoid is firmly imbedded in the Beltway belief system and in the algorithms used by most political analysts, who predict that the Democrats will capture the House and perhaps the Senate as well. Forbes echoes the conventional wisdom: “Historically, The President’s Party Performs Poorly In the Midterms.” Like many things “everyone knows,” this is spurious rot. In reality, it’s unusual for either house to flip in the first midterm of a presidential administration and quite rare for power to shift in both houses of Congress.

While it is indeed common for the president’s party to suffer modest losses in a midterm election, this rarely results in congressional power shifts. Since World War II, only two elected presidents have lost both houses of Congress to the opposition party during their first terms: Eisenhower (1954) and Clinton (1994). These are also the only years in which the Senate has flipped during the first midterm of an administration. The House has changed hands more often, but this is not a regular occurrence. Since WWII, it has flipped in the first midterm of only three elected presidents: Eisenhower (1954), Clinton (1994), and Obama (2010).

Why has the commentariat exaggerated the potential impact of this year’s “midterm curse”? They have either forgotten (or ignored) the unique political dynamics associated with a relatively new presidency compared to the more complex environment that usually prevails in the midst of any president’s second term. They have also underestimated the positive impact of President Trump’s high popularity among Republicans, who turn out more reliably for midterms than do their Democrat counterparts. Finally, they don’t grasp the implications of a recent Gallup poll showing the Republicans with a higher favorability rating than the Democrats:

Only one other time in the last decade has the Republican Party had a significantly higher score than the Democratic Party. That one exception came in November 2014, immediately after elections that saw Republicans capture control of the Senate and expand their majority in the House.

And the news gets worse for the Democrats who worry about that all-important turnout number:

The percentage of Republicans and leaners with favorable views of their party grew from 67% last September to 85% now.… The fact that Republicans are more likely to view their party favorably than a year ago can be considered a positive indicator for the party, particularly if a more positive image boosts Republican turnout.

And what are the Democrats doing to win back the trust of the electorate? They have launched a strategy that combines calumny and clownish candidates. To that end they have slandered widely respected jurist Brett Kavanaugh, wildly popular rapper Kanye West, and even the voters themselves. Their “rising stars” are ridiculous charlatans like Elizabeth Warren, who fraudulently claims to be native-American, fake Chicano Robert Francis O’Rourke, who was rejected when he tried to join the Congressional Hispanic Caucus, and phony “girl from the Bronx” Alexandria Ocasio-Cortez, who was raised in Westchester County, New York.

If this strikes you as a losing strategy, you’re not alone. The smear of Supreme Court nominee Brett Kavanaugh did not play well with registered voters. A Harvard-Harris poll conducted at the end of his final hearing before the Senate Judiciary Committee found that 69 percent of respondents considered the confirmation hearings a “national disgrace.” Even worse for Democratic hopes of regaining a majority in either house of Congress, an NPR poll conducted after the hearings found that the enthusiasm advantage they allegedly enjoyed during most of the year had “evaporated” after Feinstein & Co. raked Kavanaugh over the coals.

And how did the attacks on Kanye West turn out for them? Not too well. When he left the Democratic plantation to have a conversation with President Trump at the White House, California Democrat Jackie Speier went on CNN and said, “I felt like I was sitting in on a psychiatric visit and a commercial for Donald Trump.… I would suggest that the President should curtail these kind of engagements.” That was, of course, accompanied by similar cheap shots by the talking heads. Candace Owens of Turning Point USA explained to Laura Ingraham how such attacks on West will work out for future Democratic prospects:

The Democrats rely on our vote.… So they will say whatever they can to smear him to make sure that no other black people wake up and understand that it has been the left that has harmed our community. It has been Democrat policies that have rendered our communities in the shape that they are in today, when we talk about Chicago and Philadelphia and all the major cities that they have run down. Black people are having a mass awakening and Kanye West is a big part of the reason why.

But alienating their most loyal constituents is by no means the dumbest tactic in the Democratic tool kit. They continue to insult the voters in general. Following the lead of Hillary Clinton, who classified Trump voters as “deplorable,” Joe Biden recently implied that people who don’t support Democrats are “the dregs of society.” And insulting the voters is not restricted to the Beltway. Democrat Kyrsten Sinema, who is running for the Arizona Senate seat soon to be vacated by Jeff Flake, has referred to the Copper State as “the meth lab of democracy.” Evidently calling her constituents “crazy” has long been a regular part of her stump speech.

All of which means that the outcome of the midterms depends less on the arc of history than the ineptitude of the Democrats. Even if history actually supported the claim that the President’s party always gets clobbered in the midterms, bumblers like Biden, Sinema, Warren, O’Rourke, Ocasio-Cortez, et al. will probably save the Republicans. The voters have heard the calumny and seen the clowns. Even worse, they know the Democrats want to hit them with high taxes, open borders, and single-payer health care — not to mention an impeachment charade that would put the Kavanaugh circus to shame. The GOP Congress is probably pretty safe.