Hither and Yon Donald Trump,Hunter Biden,January 6,January 6th Committee,Joe Biden Does Joe Biden Think He’s America’s Jailer? - The American Spectator | USA News and Politics
Menu
Hither and Yon
Does Joe Biden Think He’s America’s Jailer?
According to a new report, he would like to put Donald Trump behind bars. Shouldn’t he be more worried that he, or his spoiled son, could actually suffer that very fate? 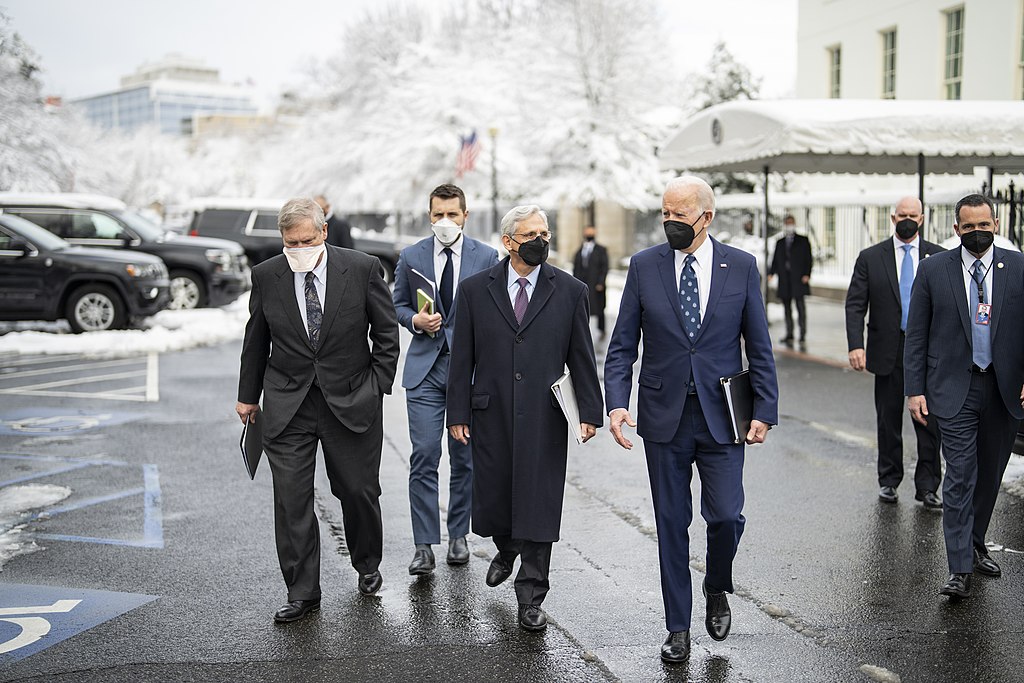 You’ve got to hand it to the Democrats. When they latch onto something there’s no quit in them.

As an example, a Washington Examiner story over the weekend details how Joe Biden, and presumably the people handling him, are busily dreaming of putting the Bad Orange Man in a good orange jumpsuit.

Shocking, but not surprising.

The leak was published in the New York Times on Saturday as Democrats mount increasing pressure on the Justice Department to take action against Trump and people within his orbit in relation to the Capitol riot. At focus are Attorney General Merrick Garland and his “deliberative approach,” as the report put it, which is causing frustration.

“As recently as late last year, Mr. Biden confided to his inner circle that he believed former President Donald J. Trump was a threat to democracy and should be prosecuted, according to two people familiar with his comments,” the report read. “And while the president has never communicated his frustrations directly to Mr. Garland, he has said privately that he wanted Mr. Garland to act less like a ponderous judge and more like a prosecutor who is willing to take decisive action over the events of Jan. 6.”

Just what Trump would be prosecuted for is unclear. However, the House committee investigating the Capitol riot says its investigators have reason to believe Trump and his associates broke multiple laws in efforts to overturn the 2020 election. In a recent court filing for John Eastman, a Trump-linked conservative lawyer, the panel said it has evidence to show Trump may have engaged in a criminal conspiracy to defraud the United States and illegally impede Congress’s counting of electoral votes.

Nevertheless, the House committee can only make a criminal referral, leaving the onus on the Justice Department.

We all knew that Nancy Pelosi’s kangaroo court in the House, let by Captain Kangaroo Bennie Thompson of Mississippi and a pair of boxing joeys on their way to political down under in Liz Cheney and Adam Kinzinger, was ultimately aiming at proving some sort of Trumpian conspiracy behind the One-Six “Insurrection.”

But the only thing the Pelosi-Thompson Jan. 6 commission has proved, and it’s done it pretty conclusively, is that the Democrat Party doesn’t live in Realville, doesn’t want to live in Realville and desperately wants to call in an airstrike to level Realville to the ground.

They keep trying to call the January 6, 2021 Capitol protest an “insurrection,” lending every trapping to that argument they could — including burying the “insurrectionists” under a federal jail in one of the most disgraceful examples of government overreach and abuse of modern times. It’s always seemed a bit bizarre, hasn’t it? So far as this writer can tell there was a grand total of one Capitol protester who was charged with carrying a firearm into the building.

One gun does not an insurrection make. Not against Biden, who talks, Vladimir Putin-style, about dropping nukes on anti-government types if it got hot in the kitchen.

That there was no GOP “insurrection” to be had, outside of a noisy protest which only delayed the congressional certification of the election for a couple of hours, doesn’t seem to bother Team D. They’ve moved on to the fantasy that Trump attempting to lobby Senators and Representatives not to certify the election and contemplating potential options and maneuvers which didn’t come to pass is tantamount to an assault on “Our Democracy.”

Pelosi and Thompson have wasted an entire year trying to tie the protests to some Trumpian conspiracy, and it obviously isn’t going to happen. If we’re being honest, Trump didn’t even do a particularly vigorous job of mounting a coup the easy way; if he was going to “overturn the results” of the 2020 election, the way to have done that would be to hire every lobbyist plying that trade in Harrisburg, Atlanta, Madison, Lansing, Carson City and Phoenix to logroll, cajole, canoodle and bullyrag their way to getting Republican state legislators not to certify election results in states with widespread irregularities and 4 a.m. vote total dumps. Et cetera.

Not to mention that if Trump was truly of an “insurrectionist” bent he would have thrown every wrench he could into efforts by private entities like the Center for Tech and Civic Life to pervert local elections offices into ballot-harvesting combines.

Those were all things he could have done in response to above-and-beyond shenanigans the Biden campaign and its allies were pulling, including supporting real insurrections in the streets of cities like Minneapolis, St. Louis, Seattle, and Portland throughout 2020. Or don’t you remember Kamala Harris and her campaign minions paying rioters’ bail while she cheered on the attempted destruction of federal courthouses?

The New York Times, by the way, busily reports Joe Biden wants to prosecute Donald Trump while that’s news. It doesn’t wait 20 months to break that story, like it did on the real president-with-legal-issues story afoot in America now.

The same Big Tech troglodytes who conspired to “fortify” the 2020 election with street money in Detroit and Philadelphia and Atlanta were also at work “fortifying” Biden against the Hunter Biden laptop revelations, which are now inescapable given that America’s Crackhead and the country’s most famous deadbeat dad likely faces indictment from a federal grand jury on a whole raft of possible charges emanating from what was on the laptop he abandoned in a Delaware computer repair shop.

Were it not for the natural inclination to believe Hunter Biden is far too connected to serve any jail time, and the objective certainty that Joe Biden would pardon his son and other family members for any illegal dealings that ultimately benefited the Big Guy, one would see the trajectory of the laptop investigation as a constitutional crisis and potential impeachment in the making.

Would Hunter go to prison for his father? Would Joe’s brother James?

Would anybody go to prison for Sleepy Joe?

That’s a hypothetical, of course. It’s based on the quaint notion that the justice system applies to everyone equally, which we know isn’t something that exists in Realville.

But it still stings the nostrils to think that Biden, possibly the most corrupt and criminally inclined individual ever to occupy the White House (and that would include Bill and Hillary Clinton, so yes, it’s a bold statement), would be blathering about prosecuting Trump.

Yet that’s apparently what we have.

To any Republican members of Congress or candidates for the House who might be reading, please keep this in mind upon taking your majority in January. Show this man and his handlers no mercy in your investigations and, hopefully, impeachment proceedings. After all, they have none to offer you.