Most Americans don’t spend much time thinking about the wars we’re in. The 43,000 of us lucky enough to be in Yankee Stadium on Saturday were reminded in a way that did the Bronx Bombers proud.

Saturday was military appreciation day at the stadium. Thanks to Hal Steinbrenner — Yankees general partner and Special Operations Warrior Foundation board member — it was a day dedicated to SOWF and the children of those who are killed in the line of duty.

Thanks to Mr. Steinbrenner and VAdm. Joe Maguire (USN, Ret.), my wife, Sharon, and I were invited to be part of the small gang that sat in the owner’s suite to see the game. Joe knows I’m a lifetime Yankee fan and generously included us among the SOWF gang.

It was the thrill of a lifetime. I’ve been a Yanks fan for as long as I can remember. When I was a kid, growing up in the Bronx and Yonkers, my pals and I rode our bikes everywhere, pretty much all year round. In the summer months, I sometimes had trouble keeping up with my friends. Even at age eight or so, I had a good sense of priorities. While other kids had better leverage on the pedals with both hands on the handlebars, I sometimes struggled to keep up because I rode one-handed. My left hand always held a small radio so I could listen to Mel Allen, Phil Rizzuto, and Red Barber broadcast the games.

Watching a game from the owner’s suite — on the third base side of home plate — was an unforgettable experience. Mr. Steinbrenner’s crew served all sorts of fancy food and drink, but the best were the hot dogs. I’d never been to the new stadium before, but spending much of my youth in the right field bleachers of the old stadium, it was necessary to my game ritual to have a hot dog. I remembered the great “tube steaks” from those days. This one, topped by the onion relish you only get in New York, was simply superb. 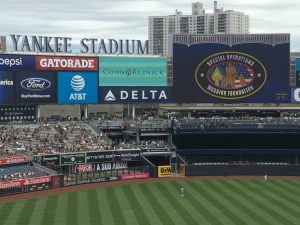 I first met Kaitlen Carter and her brother at an April SOWF dinner in Tampa that I emceed. Kaitlen spoke at the dinner about how her father, Chief Warrant Officer David Carter, always spoke about his dream that both of his kids would go to college. I’ve been emceeing SOWF dinners on and off for almost two decades, and I’ve listened to a lot of speakers. Kaitlen hit it out of the park, and there weren’t many dry eyes when she spoke.

Kaitlen — a recent Baylor University grad — was honored on the field as part of the pregame ceremonies. Her dad was killed in Afghanistan in 2011 when he was co-piloting the “Extortion 17” helo that crashed killing him and many members of SEAL Team 6.

And that’s part of the story. When word of the deaths of 38 men aboard Extortion 17 came to SOWF there was no hesitation. David Carter wasn’t, technically, a member of the spec ops family. He was a Colorado Army National Guard helicopter pilot. But there was no hesitation on the part of SOWF. He was one of the men sent in harm’s way by Special Operations Command, and that was the only qualification necessary to determine that his children, like so many others, would have SOWF pay her (and her brother’s) college expenses.

Elizabeth Ponder was there on Saturday with her mom. She will be a freshman at Auburn University this fall. Her father, Army MSgt. James Ponder, was killed in action in Afghanistan in 2005 while serving with the 160th Special Operations Aviation Regiment in Afghanistan. Her education will be paid for by SOWF. She and her mom, as well as Kaitlen Carter, were honored on the field in the pregame ceremonies.

They were present when some very generous donors — Neil Friedman of Alex Brands and Paul Gublin of Cohn-Reznick Advisory Group — presented checks to Adm. Maguire.

It was a great day for SOWF. The weather was perfect, clear, cool and windy, which is unheard of in July in New York. The Army Golden Knights parachute team was there. They enjoyed the game despite the fact that the high winds prevented them from jumping into the stadium as they’d planned.

Air Force special operator CMSgt. Jason Andrews is superintendent of operations for the 24th Special Operations Wing. He was there with his dad. Jason threw out the ceremonial first pitch and smiled the rest of the day. (The Yanks, of course, gave him the ball as a keepsake.) Former Army Ranger and country singer Keni Thomas sang the national anthem in a heartfelt way that made all of us sing along.

As much as I love football, baseball is still America’s game. The players reflected that. They were playing hard and obviously enjoying themselves. There were no Colin Kaepernicks sitting down when the Keni sang the Star Spangled Banner.

The game seesawed back and forth and we went into the bottom of the ninth with the score tied. With the bases loaded Brett Gardner hit a single and the Yanks won 5-4.

We should all remember our special operations troops and the risks they take every day. American special operations troops are deployed in about eighty countries around the world. They bear the heaviest burdens of the wars America is fighting because they’re the forces that presidents think of as the easy way to deal with the “limited wars” we’re in. It’s anything but easy, even for our extraordinarily skilled commandos. Though they number about 3 percent of the armed forces, our special forces are taking about 65 percent of the casualties.

What is SOWF? A little history is in order. When eight men were killed during the failed Iran hostage rescue mission in 1980, their surviving comrades in arms wanted to do something substantial to help the families of the fallen. They decided to send their children to college.

What they began 37 years ago is now the Special Operations Warrior Foundation (www.specialops.org). When anyone Special Operations Command sends in harm’s way (not just the commandos) is killed, SOWF pays the costs of his children’s college education.

As of this week, there are about 300 SOWF college graduates, 162 will be in college this fall, and over 700 children — some in their first year of life — are “in the pipeline” to go to college in future years.

As Joe Maguire says, SOWF has made a solemn pledge to put all of those kids through college. It’s going to take a pile of money to do that. Please give generously at www.specialops.org.