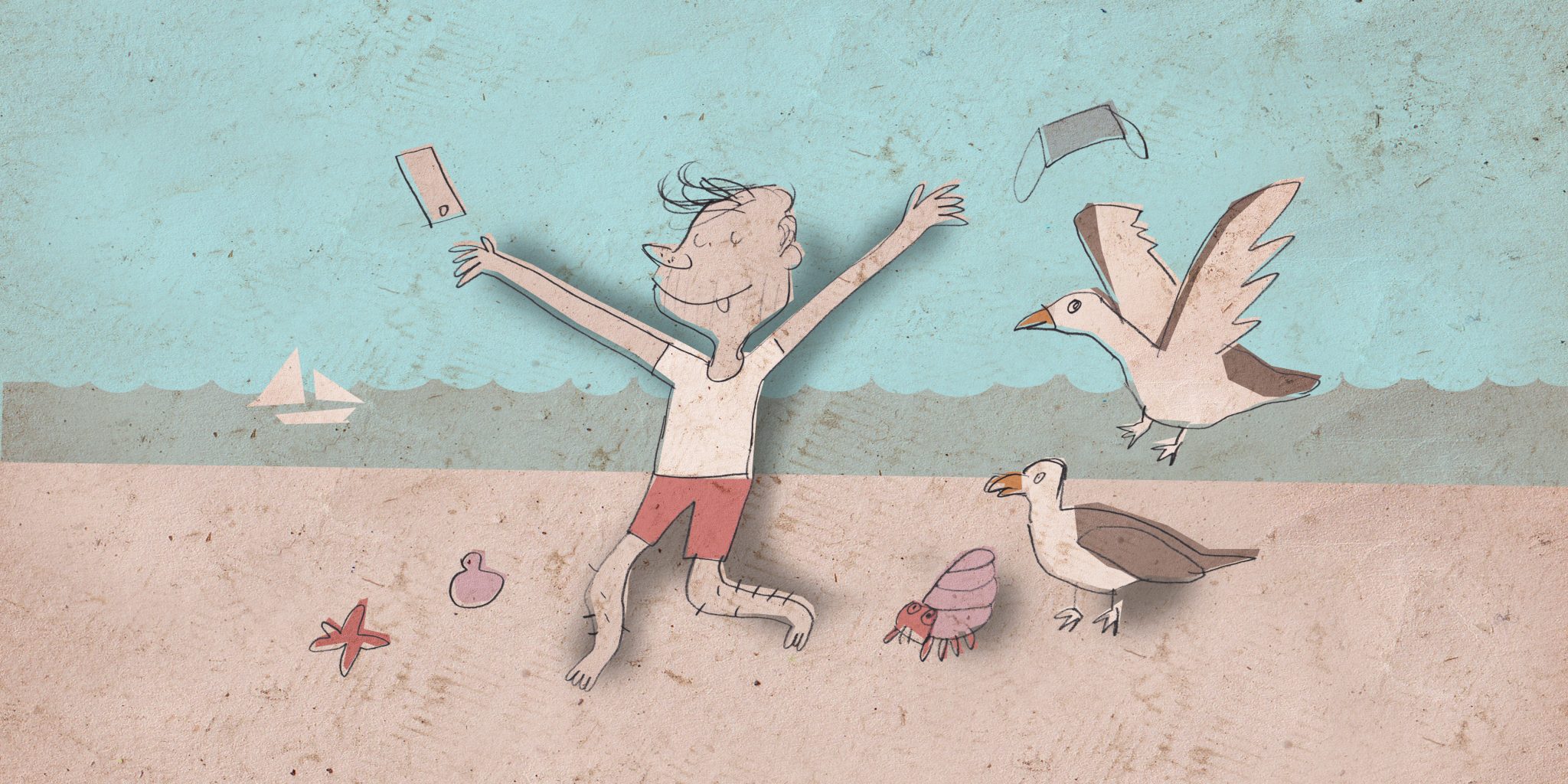 This morning I went for a walk by the sea. You were still sleeping. It is the paradox of writing on this side of the ocean. There were a bunch of seagulls pitifully fighting, pecking over the garbage, and for a moment I felt like I was in Cuba. The Atlantic was strangely calm, sleepy, like Joe Biden in Texas. At the end of the long boardwalk, looking toward the horizon, I committed a crime — I lowered my mask — and took a deep breath, celebrating my freedom. The sun shone with the warm softness of morning, and a bright breeze cooled me. Then, with my arms stretched up in the air, I admired the blue sky as if it were a painting by Velázquez, and I said to myself, “Oh, my goodness, I’m in a good mood.”

I immediately called the doctor. He is familiar with my case. It is one of his favorites: mad journalist, cursed writer, and depressed satirist. He keeps my file in a sealed envelope. I’m a gem for studies in psychiatry. “I’m on my way,” he tells me instantly. The good thing about psychiatrists is that they’re used to an emergency being an emergency. I mean, even a heart attack is easier to handle than the emergency of a madman who has decided to become Napoleon and conquer the neighborhood with a katana. In my defense I will say that I was not carrying a katana, just a pen and paper. Very quixotic, but not enough to reenact the Crusades.

“The world is going to hell, the pandemic is never going to end, and an idiot is ruining your country, casting it into the dustbin of history,” my doctor stated loudly as soon as I arrived. “How the hell can you be in a good mood?” “For a psychiatrist,” I interrupted, “you look a lot like Ted Cruz when you poke him.” We engaged in an intense debate until I felt the call of a cold beer. Beasts feel the call of the wild. Columnists feel the call of cold beer, which tells us when to end a conversation and immediately go get drunk.

Before saying goodbye, I was prescribed a salad of antidepressants and tried to give him a big hug, which he intercepted, striking me with both elbows at the same time. A perfect tackle. In addition to being a psychiatrist, he is a hypochondriac and is convinced that we all have typhus, so for him not being able to touch others of his kind has been quite convenient. This scoundrel moves his elbows better than Jack Lemmon imitating a chicken.

Actually, my psychiatrist is a good doctor, but a little haughty: he can’t stand it when his patients get cured. He is like the surgeon who dies of pleasure when a guy enters the operating room with an amputated leg between his teeth and one of his eyes in his pocket, wrapped in a napkin. In a way, it’s like any socialist: they like to spend all day complaining that there’s too much to fix, but they can’t stand to see something finally working on its own.

Later I managed to order myself a beer on the waterfront. I’m surrounded by so many guys jogging in their underwear that I’ve come to suspect that a lion has escaped from the circus. There are also plenty of girls, dressed like a Kardashian doing her groceries, burning calories, while making the underwear joggers sweat more. The truth is that they all look like they just fell out of a TikTok ad five minutes ago. My thesis is that, in spring, God opens the door to the shed where he hides all the beautiful girls during the winter and repopulates the streets with beauty and light (I am aware that the end of this sentence is quite gay).

I am still a bit worried about my strange, overflowing optimism. The waiter was very impertinent when I asked for my third beer. He asked me if I had nothing better to do. I gave him a well-reasoned answer, grounded in the great classics of Greek literature, and conscientiously substantiated in the foundations of Christian humanism: “No.”

Since then, he seemed upset. I will never understand people who insist on being angry when I am happy.

Suddenly a tragedy occurred. And I mean a real one. I found a fly floating in the beer. At first, seeing it so drunk and in the middle of the foam party, I thought it was Hunter Biden. But up close I discovered that it was a dipteran specimen, with no known political affiliation and no links to the Chinese dictatorship. And although this helped put my mind at ease, I still felt a deep disgust, although not enough to pour away the beer (I said I was disgusted, not insane).

“Waiter, there’s a fly in my beer,” I said with feigned calm.

“In that case, I will be forced to add it to your bill,” he replied with a voice like B. A. Baracus.

He’s an idiot, but he hasn’t managed to ruin my day.

On the way back, I walked to where my car was parked, a couple of streets farther up. I was whistling “Where I Find My Heaven,” by the Gigolo Aunts, but the wonderful cover version my friend Cooper recorded. Upon arriving at the car, I found something worse than a fly in my beer. My precious car had a ding in the door, as dented as Kamala Harris’s conscience. No, it wasn’t a little scratch. It was the mother of all dings. The culprit didn’t leave a note, didn’t hand himself over to the police, didn’t even ping me on Tinder. He just took off. I only hope the impact was made with his damn head.

In spite of everything, I went home happy and whistling, taking up the song again. There are days when nothing can spoil your good mood. And if you feel yourself waning, you can always turn on the new UN comedy channel, where they just elected Iran to chair the Commission on Women’s Rights. It’s hilarious.

Have a nice day. Oh, and be sure to listen to Cooper’s cover of “Where I Find My Heaven.” Iran! Women’s rights! So witty! It’s amazing that, having so much work to do, António Guterres’s guys find time to give us a good laugh.