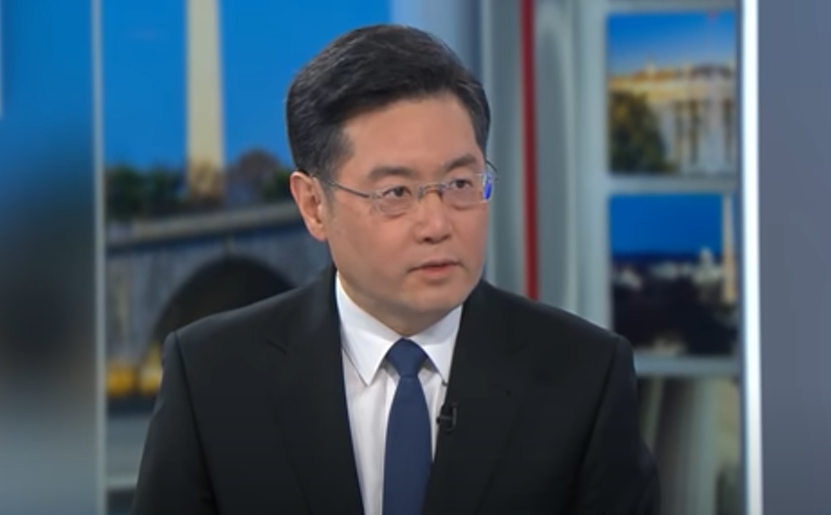 This year, 2023, is the Chinese Year of the Rabbit, and China is sending a cute one to us. The former Chinese ambassador to the United States, Qin Gang, has been promoted to the position of China’s foreign minister, and, on the occasion of his departure as ambassador, he published an article in a U.S. newspaper in which, contrary to the world’s notorious image of Chinese diplomats as wolf warriors, he smiled all over, put down his stance, and talked about the importance of Sino-U.S. friendship! The “hypocritic” and “destructive” Americans “with poor human rights records,” according to the Chinese Communist Party, suddenly became “broad-minded, friendly and hard-working,” a people full of “sincerity and hospitality.” I was shocked — is this guy a CCP official or a candidate for the U.S. Congress?

The panda huggers in Washington and the West must be so happy to see such a statement: They can forget again all the bad things the Chinese Communist Party has done! China and the U.S. can get back together again! We are relieved to have such a moderate person as China’s foreign minister!

Is this really the case?

The Qin Gangs certainly think so. They have been fooling Americans for years. They also think that this time will not be an exception. Americans, with their Christian spirit of forgiveness, do not hold grudges and can still be easily manipulated by the CCP.

If American people and politicians are so fooled over and over again without realizing it, America is really hopeless.

Ironically, Qin’s sweet talk is not believed even by the Chinese. I saw the following comments on Qin’s article in a WeChat group of mainly Peking University alumni:

“Qin just spoke well, but the problem is that no one believes it now, and others understand that this is a tactical retreat.”

“Saying one thing and doing something else.”

“Even if the boss [Xi Jinping] says what Qin Gang said, it would be useless.”

“You can’t say one thing and do another.” [Someone liked this one.]

“The biggest change in the United States this decade is that it no longer believes in the promises of Chinese leaders.”

“No one believes him.”

There is a Chinese proverb that says, “The same trick cannot work three times.” An English proverb says, “Fool me once, shame on you; fool me twice, shame on me.” How many times has the United States fallen for the Chinese Communist Party? Too many to count. Here I will list just a few of the major dupes of past U.S. presidents:

• In 1972, Richard Nixon, accompanied by Henry Kissinger, visited Communist China, which had been closed since the 1949 Communist Revolution. It was in the midst of the Cultural Revolution: The economy was collapsing, the CCP was fighting with the Soviets, and China was in isolation. Nixon’s visit gave a much-needed shot in the arm to the CCP. Nixon was a hardcore anti-communist; thus, he was not a Chinese Communist admirer. But I think he greatly underestimated the ability of the CCP to survive. Faced with internal and external crises, Mao Zedong, Zhou Enlai, and others all put themselves down and warmly received the “American imperialists” in order to save the Cultural Revolution and seek a turnaround. This marked the first time a U.S. president was fooled.

• In 1979, just over two years after the death of the great dictator Mao, the Chinese Communist Party had just ended a decade of devastation from the Cultural Revolution, and the country was in ruins, with the economy in desperate need of recovery. Jimmy Carter announced the establishment of diplomatic relations with China, another shot in the arm. This was the second time a U.S. president fell for it.

• In 1989, an unprecedented mass pro-democracy movement broke out in Beijing’s Tiananmen Square, which was brutally suppressed by heavily armed troops and tanks on June 4, resulting in the Tiananmen massacre that shocked the world. At this time, countries all over the world condemned the Communist atrocities and came to the aid of Chinese democrats. The situation at that time provided an opportunity for China to move toward democracy. If democratic countries around the world had joined together and pressured the CCP, it could have possibly led to China’s democratic transformation, but the United States, under the leadership of George H. W. Bush, decided to adopt a policy of nonintervention and did not actively press the CCP to end its dictatorship. After the Tiananmen massacre, China’s economy declined greatly, and Deng Xiaoping went to Shenzhen, a relatively open and developed city in southern China, and called for the opening of China’s economy while pleading with the world to continue to do business with the country. He masterminded the strategy of hiding one’s strengths and biding one’s time, not competing with the United States for hegemony, not becoming a world leader, and concentrating on economic development. This strategy worked well, and this marked the third time an American president fell for it.

• In 1999, when China applied to join the World Trade Organization, many countries expressed concern, including U.S. businesses and politicians, because, after all, China was still under the rule of the CCP and a communist economic system — how could it join a World Trade Organization based on democracy, the rule of law, private-property rights, and the protection of free trade? At this time, Bill Clinton strongly supported China’s bid, and, to his credit, China’s application succeeded. This was the fourth time that a U.S. president was fooled.

• From 2000 to 2015, the United States went through two presidents: George W. Bush and Barack Obama. They began to realize that the rapidly developed Chinese Communist Party had begun to flex its muscles on the United States, including through military provocation, harassment of neighboring countries, reclamation of islands for military purposes, and so on. Both presidents often complained to the CCP, telling it to abide by international law and order, be a responsible member of the global community, and so forth. The CCP always accepted these complaints with humbleness and told the U.S. that it would definitely change. Back then, the U.S. was still considerably more powerful than China. For example, in 2000, China’s gross domestic product was $1.2 trillion, while the U.S. gross domestic product was $10 trillion, nearly 10 times that of China. Therefore, the strategy of the party at that time was to refrain from confronting the U.S. head on, to promise changes while, in fact, making none at all. In Chinese, it is called playing taichi, making circular movements without achieving anything. So, it can be said that Bush fell for the fifth time, while Obama fell for the sixth time.

Things changed in 2016 when Donald Trump was elected president. With the assistance of his think tank, Trump quickly figured out the CCP’s taichi strategy of humbly accepting U.S. criticism while resolutely refusing to change. He took a head-on approach, forcing the CCP to make structural changes by directly increasing tariffs. At the same time, he asked the CCP to stop infringing on intellectual property rights, to open up the market, and to allow the free flow of information. The Trump administration was threatening to delink from China if the CCP failed to make structural changes. What Trump did made his threat credible.

Trump’s strategy has worked. The Chinese Communist Party found out that taichi was not working and started buying more American goods.

The survival of the dictatorship of the CCP depends on profitable international trade, with the CCP taking the lion’s share and the people taking a small share. If the world, especially the developed democratic countries, decouples from the Chinese economy, China will not be able to profit from international trade, thus leading to increased internal strife and destabilization of the CCP’s rule. So, the CCP’s greatest fear is being delinked from the world, especially from the developed countries. This was the first time that an American president did not fall for the Chinese Communist Party’s tricks. (READ MORE from Shaomin Li: Another Wuhan-Style Virus Outbreak Is Brewing)

Now comes Joe Biden as the president. Biden’s current China policy is basically a continuation of Trump’s policy. The current administration has even started to contain the CCP in chip and high-tech industries. However, Biden’s policy is still unclear, and the people he uses are weak. As a result, the CCP often gains the upper hand in matches. At the same time, the Biden administration has adopted a policy of not actively asking the CCP to make structural reforms, an approach that allows the CCP to become even stronger.

The good news is that a bipartisan, bicameral consensus has emerged in the U.S. Congress that the greatest threat to the United States is the Chinese Communist Party and the huge Chinese economic and military complex under its control. So, the United States has begun to make the right turn in dealing with China.

Just like a huge cargo ship, it will take time for the U.S. to go from a policy of engagement to one of containment. But it is happening. There are signs that delinking is occurring: Apple has moved some of its product production to India and Vietnam, and this is what the CCP fears most. So, the CCP ordered its new foreign minister, Qin, to rush to extend an olive branch and make a goodwill gesture to the U.S. in order to fool the country once again.

Will the United States be fooled this time?

Falling for the same trick twice already reveals one as a fool, and America has been fooled so many times that I cannot find a proper term to describe it anymore.