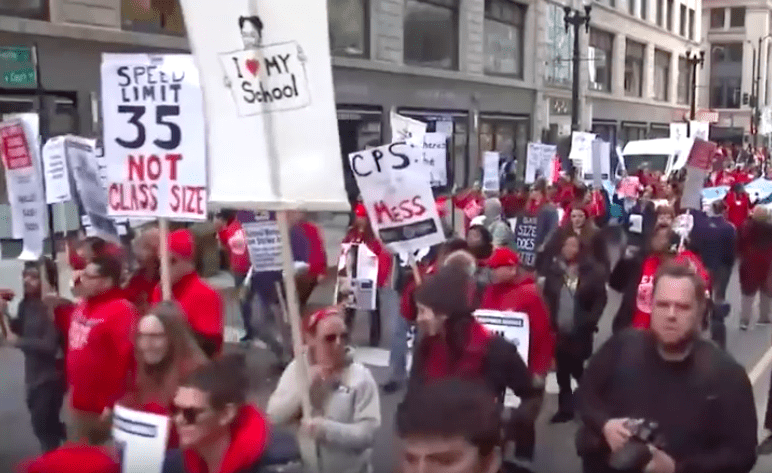 The streets of downtown Chicago were packed last week with more than 30,000 teachers protesting for pay increases and other benefits like affordable housing, smaller class sizes and more nurses and social workers on campus. Talks continued over the weekend, and the strike has entered another week, leaving more than 360,000 students stranded with no place to go. To the teachers and union, I say shame on you for holding the city of Chicago hostage. It’s time to stop whining and get back to work.

I have many friends and family who are educators, and I know it’s a difficult job. I have complete respect for teachers, and I believe that preparing our next generation of leaders is one of the most important jobs one can do. Chicago teachers, however, have it pretty good right now. The average salary for Chicago teachers is roughly $71,150 per year. Mayor Lightfoot is offering 16-percent raises for teachers over five years, meaning the average teacher will make about $100,000, according to the school system.

The teachers are also asking for non-salary additions, such as increasing the number of nurses, social workers, and librarians, as well as reducing classroom sizes and shortening the school day by 30 minutes to give teachers more time to prepare. The teachers are also demanding to be paid for unused sick days.

It makes you wonder what kind of a fantasy world these people live in. The bottom line is that all of these demands cost money, in this case, roughly $2.5 billion dollars annually. This is money Chicago doesn’t have, yet the teachers insist on sending the city deeper into debt.

Personally, I believe many of Chicago’s teachers want to take the offer and run, because deep down they know that it’s a great deal. What’s holding them back? The union. Union workers have become spoiled based on every factor outside of job performance and results. There was a time when employers abused their power and unions leveled the playing field. They gave the little guy a voice, and it worked.

Unfortunately, the problem today is that union leaders and members refuse to give up their stranglehold on industry and government. This is exactly what we are seeing happening in Chicago. The abuse of power is coming from the unions instead of employers. Instead of being able to think and act for themselves and take the generous offer that is on the table, the situation is out of control, and the teachers and union have taken the city hostage.

Where are 360,000 kids who should be in class supposed to go? The poverty rate for kids in the district is a whopping 80 percent. Parents are going to be forced to miss work when money for these families is already extremely tight. The teachers and union should be ashamed!

The teachers and the union also seem to have missed is that the Illinois Teachers’ Retirement System, the state’s biggest pension fund, is extremely underfunded. That nice cushy pension that many teachers are relying on is already not guaranteed, and they have the audacity to ask for even more money. Give me a break! Clearly the teachers and union have no idea how money works, and they need to stop being so greedy, take the incredible deal they’ve been offered, stop holding the city hostage, and go back to work.

Unions are another archaic American institution that served a purpose in a bygone era and should be buried with the dead. Unfortunately, history repeats itself, and sadly, most people don’t seem to learn from the past. I was onsite in Madison, Wisconsin, back in 2011 when teachers clashed with Gov. Scott Walker. All the teachers told me they had the right to collective bargaining and to their jobs. When I asked them where job performance fit into the equation, I barely got a reply. They looked at me as though they didn’t understand the question. That’s one of the biggest problems that unions create: the idea that members have a right to a job, like it’s an entitlement awarded at birth.

I sincerely hope that this unfortunate and unfounded strike in Chicago comes to an end. Three hundred sixty thousand children, most of them living in the inner city, belong in the classroom, not wandering around a dangerous city and potentially finding trouble. It’s time to school the teachers, abolish the union, and make our students the utmost priority.

Steve Siebold is the co-author of the book How Money Works: Stop Being a Sucker.