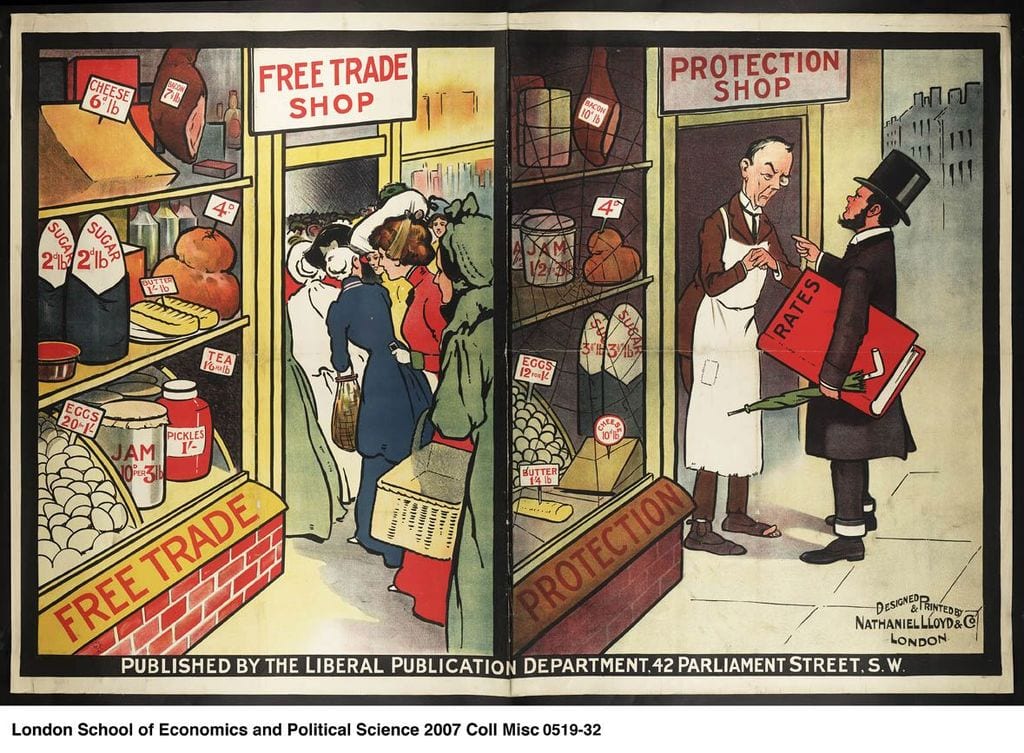 Competitive Enterprise Institute’s (CEI) “Traders of the Lost Ark: Rediscovering a Moral and Economic Case for Free Trade” says that free trade is one of the most important factors that has lifted people out of poverty, as cultures and nations used their strengths to barter with others with different strengths.

CEI points out that since the international General Agreement on Tariffs and Trade came into effect in 1948, countries have slowly been lowering their trade barriers. Whereas once tariffs on dutiable goods were as high as 60 percent in the United States, the duties are now below 5 percent. Because most goods are duty-free, the average tariff is around 1.6 percent, the study says.

“It is important for America’s, and the world’s, long-term prosperity for policy makers to continue down the path of trade liberalization,” the report says. “In the short term, that means opposing any raising of trade barriers and making the broader case for freer global trade.”

America’s new tariffs have been met with tariffs from the effected nations, which is hurting consumers.

The trade wars that are beginning to arise are “the greatest threat [free trade] has yet faced” since the post-World War II era, CEI said.

The report posits that free trade has been supported almost universally by economists since the days of Adam Smith, but that “support among policy makers and the public has ebbed and flowed with the political winds.”

Tariffs can artificially inflate prices on goods both produced in foreign locales and domestically. Because the duties on the imports increase, domestic manufacturers can also increase their prices to a certain degree and gain larger-than-normal profits (what economists like to call “rents”).

The study argues this gives producers incentive to expend resources to secure those rents.

“Time and money that could have been invested in customer service, research and development, capital investment, and hiring and training new workers is spent on lobbying instead, as the latter option promises a greater immediate payoff. It is a minor miracle that special-interest lobbying, a multi-billion dollar industry, is not even larger than it is,” CEI said.

Tariffs can raise the price of some goods so high that it keeps some purchasers away. That decreased demand leads to a reduction in quantity.

“While difficult to quantify with any precision, deadweight losses caused by tariffs and other trade barriers amount to billions of dollars a year,” CEI said. “For example, reducing trade barriers by half between the United States and the European Union would increase U.S. GDP by $53 billion.”

Advocates of tariffs mistakenly argue they create more jobs; instead, economists say they just shift those jobs to other sectors.

“Tariffs won’t change the total number of American jobs; they will change the mix of jobs in a way that will make us poorer and less productive,” Texas Tech economics professor Benjamin Powell said in Fortune.

The beverage industry is one of the American industries heavily affected by the tariffs, as products from Coca-Cola to Budweiser use aluminum cans as containers. Brewers said their industry could lose $350 million, putting tens of thousands out of work.

And, of course, beer drinkers get to pay more for their suds.

Industry players may shift to substitutes — such as using more plastic bottles instead of as many aluminum cans — but CEI points out that move will also artificially raise the price of the substitutes due to the increased demand.

Powell said the move to more plastic would “shift labor and capital into the plastics industry at the expense of other sectors. These tariffs will cause literally hundreds of millions of such adjustments.”

CEI suggests a list of policy actions that the U.S. should take to open markets and improve economic growth. These include:

The study argues that protectionism is a persistent problem with everlasting appeal.

“The current administration’s seeming predilection for such policies poses a serious threat to decades of ongoing trade liberalization,” CEI said. “But it is important to fight back, regardless of the current political situation. Enlightenment values such as openness, growth, dynamism, and progress are eternal. They have already enabled billions of people to rise out of poverty. Billions more can be empowered to join them if free trade and its associated values continue to spread.”