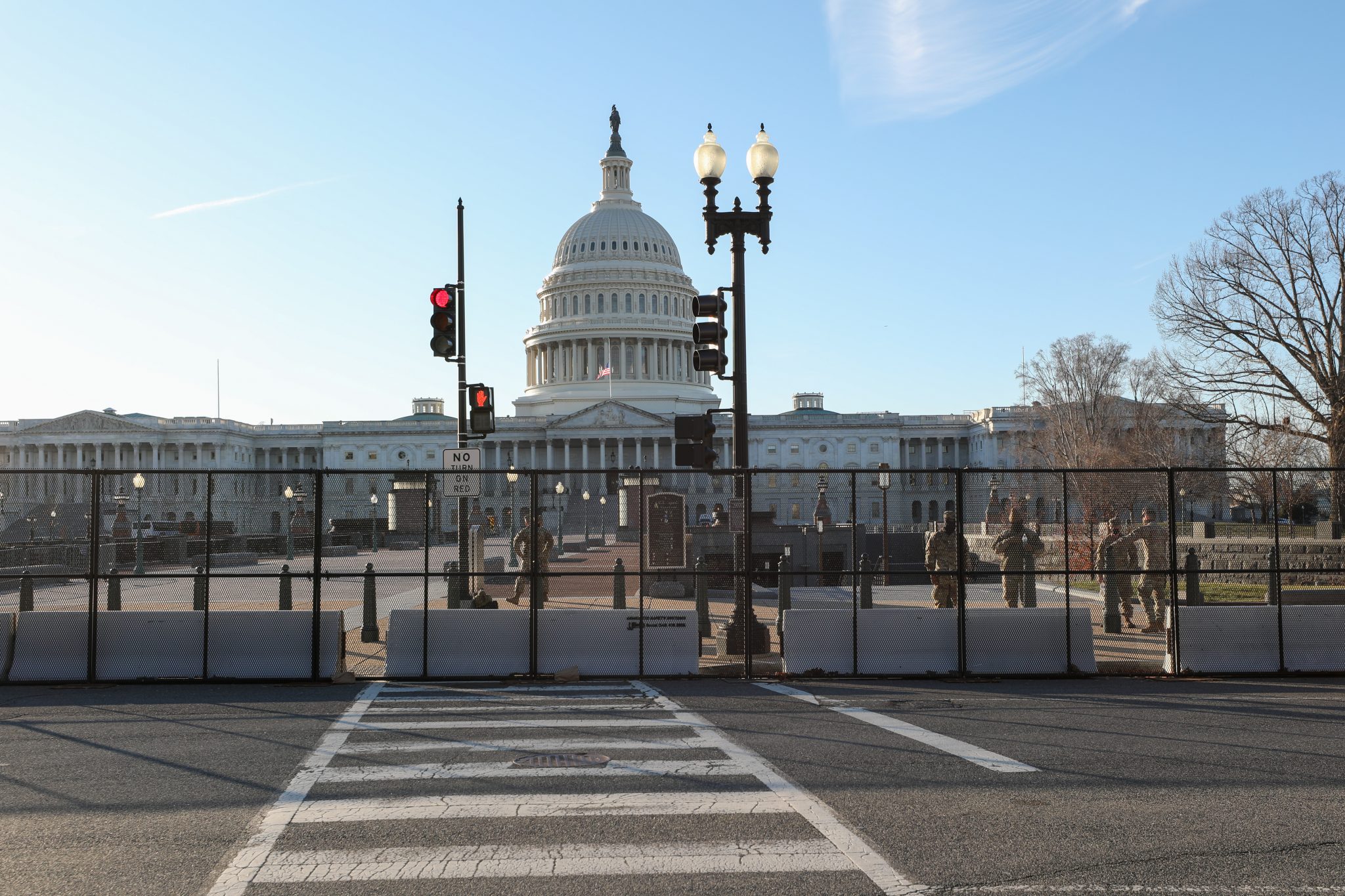 Downtown has changed a lot since last week’s massive MAGA wave rolled up Capitol Hill and into the halls of Congress.

More than 10,000 National Guardsmen this week were deployed to secure the city during President-elect Joe Biden’s inauguration. Congressional offices are so crowded that many of the troops are sleeping on the Capitol building’s hallway floors. There’s a huge metal fence surrounding the Capitol Hill complex. Police and troops patrol its perimeter day and night.

Outside the secured zone, the National Mall is also locked down. Parts of Constitution Avenue are fenced off. Crowd-preventing concrete and metal barriers have been set up in other streets. Police vans and military transport trucks are parked on nearly every corner, loaded with cops.

On top of it all, preparations for the socially distant Biden inauguration are still underway. Construction workers on the Mall (also protected by fences) are building tents and stands for the forcibly small crowd that will be allowed to attend.

Police are guarding this operation too, lest a stray protester wander in. The general consensus is that this job is not as nerve-wracking as the insurrectionist beat.

“I’d rather do this than sweep the entire f—ing mall every day,” an on-duty officer remarked as he watched a forklift driver unloading a mess of metal tubes.

The place is still alive with protesters, of course. It will be until at least after the inauguration. When I arrived this morning, a man with an “Appeal to Heaven” sign was marching in a circuit around Capitol Hill, preaching to anyone who would listen that very soon God will bring about “justice in America.”

When I asked him about the flag, which has its roots in John Locke’s declaration that people have a right to overthrow unjust regimes, he told me that he was just one of many protesters who still believes that God will intervene to change the election results.

He wasn’t the only one who remained upset about the outcome. When a man waving a Biden flag zoomed by on an electric scooter, one of the construction workers dropped his tools and shouted, “You people are animals!”

Animals with complete control of the United States government, I suppose.

In general, however, the tenor among people meandering about the Hill matched that of the flag waver. MAGA had its day in the sun last week. Now it is time for the #Resistance, Antifa, and Black Lives Matter to have their say.

As I hurried up to the Ulysses S. Grant memorial, I passed a man and a woman harping on a familiar subject.

“The only real difference between Trump and Hitler is that the Nazis were more competent than this clown,” the man said.

I didn’t catch the woman’s reply, but I’m sure I have already heard a version of it somewhere — or perhaps have read it in the many, many reprisals of the Hitler comparison these past five years.

Nearer to the Capitol fence, protesters with the group ShutDownDC unfurled flags demanding the expulsion of any Republican who had ever supported Trump’s election challenges. Unsatisfied with the House’s second impeachment of the president, they also wanted the heads of Missouri Sen. Josh Hawley and Texas Sen. Ted Cruz.

“It’s not enough to impeach the president of the United States,” an organizer announced to me and other reporters. “We need to expel the members of Congress who aided and abetted and facilitated the political conditions to allow a fascist mob to overtake the Capitol and have five people die.”

He then informed us that ShutDownDC was going to tie its flag to the Hill complex’s protective fence.

“Well, good luck,” I muttered. “You’ll never make it through this mess.”

And, of course, they didn’t. As soon as the protesters reached the fence, police swarmed them and told them to leave. When the protesters resisted, the National Guard came in. Together, the troops and the police repulsed the protesters. It was all over in 20 minutes.

If only the Capitol Hill Police had been so effective last week. There’s no reason to think that they should have been: There were thousands more rioters, and very few people in the city really thought Jan. 6 would bring any violence.

But it did, of course. We’re all worse off for it. Whether it’s MAGA or left-wing violence — or violence from overseas — each outburst leaves D.C. more walled off from the world. The anti–car bomb pillars installed after 9/11 still surround the Lincoln Memorial. The White House is still encircled with an anti-BLM fence. There’s no reason to think this situation will be any different.

I can’t imagine those fences are coming down anytime soon.