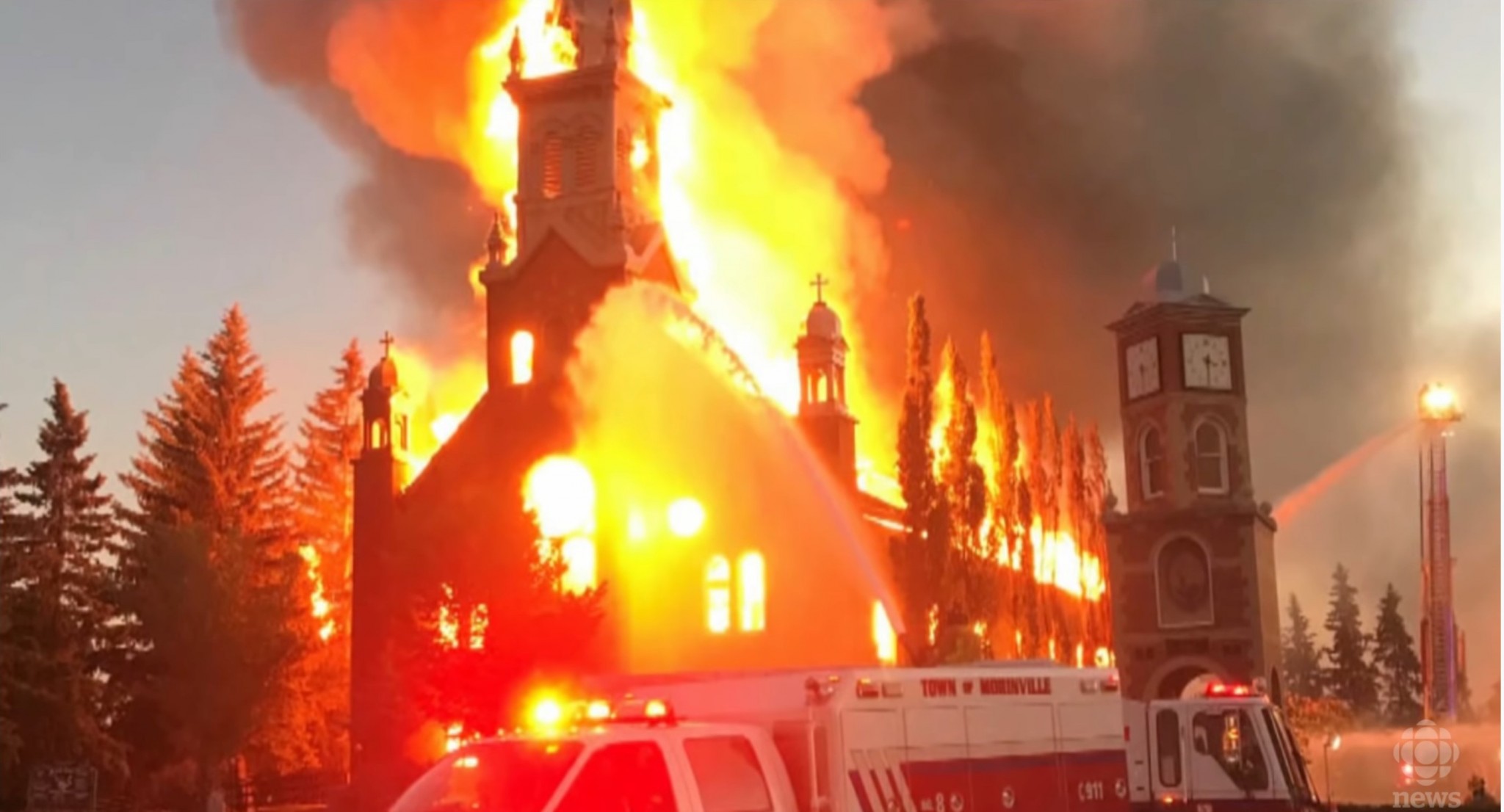 The western Canadian sky is being set aglow with blazing churches.

Nine churches have burned in Canada since June 21, with the most recent incident occurring on July 4. Many of the structures were left completely unrecognizable or burned to the ground. The burnings have some, including Alberta Premier Jason Kenney, calling the phenomenon a “violent hate crime.”

The probable arsons follow the discovery of hundreds of unmarked graves at former residential schools. Residential schools were government-funded and often church-administered institutions that housed and educated Indigenous children with the goal of assimilating them into mainstream Western society.

As these discoveries were made, the destruction of churches began, spanning the provinces of Alberta, British Columbia, and Nova Scotia. Four of those churches are within an hour’s drive from one another.

Although respective local police investigations are still developing, police said that the fire at House and Prayer Alliance Church was “not accidental,” and police are investigating the fires at Sacred Heart Church and St. Gregory’s Church as “suspicious.”

The destruction has hurt both the surrounding Christian and Indigenous communities.

In a message to parishioners, Father Sylvester Obi Ibekwe, pastor of the Catholic Parishes of Penticton, lamented the destruction of Sacred Heart Church: “The Church is gone. All I could see were ashes, ruins, rubbles. How could that be? What happened? What can I do now? I felt helpless and powerless.”

Between 1863 and 1998, more than 150,000 Indigenous children were taken from their families and placed into the residential schools. In some instances, the students reportedly suffered sexual abuse and malnourishment and were prohibited from practicing their native traditions. Canada’s Truth and Reconcilliation Commission classified the residential schools as “cultural genocide” in 2015.

At the end of May, the Tk’emlups te Secwepemc First Nation discovered unmarked graves containing the remains of 215 Indigenous children at the Kamloops Indian Residential School in British Columbia. In late June, the Cowessess First Nation implemented ground-penetrating radar and reported 751 more unmarked graves of Native children at the Marieval Indian Residential School in southeastern Saskatchewan. And just recently, the Lower Kootenay Band of the Ktunaxa First Nation, also discovered 182 human remains in unmarked graves, some only three feet deep, near the grounds of the former St. Eugene’s Mission School in British Columbia.

Protesters also objected to the history of residential schools by decapitating and tearing down statues of Queen Victoria and Queen Elizabeth II in Manitoba’s capital Winnipeg on July 1, which is Canada Day.

Canadian Prime Minister Justin Trudeau responded to the attacks on Monday, saying, “Vandalism, arson, destruction of public property, is not the way to move forward as a country.”

“These churches often have aboriginal, indigenous congregants, and they’re saying don’t burn our churches down,” Levant said. He equated the burnings of churches with native congregants to the looting of black-owned businesses in the Black Lives Matter riots.

The Guardian spoke with a woman named Allison who attended the Kamloops Indian residential school. She said the fires have only worsened the pain: “I think of all our ancestors that helped to build St. Anne’s, looking over us and watching all their hard work and the place they cherished burn to the ground. A lot of us suffered, but this is not how we do things, and this is not our way. It makes me so sick, sad, and I can only hope I do not know you. I feel sorry for you, and I hope you’re satisfied.”